Mitch Morrissey served as the elected District Attorney for the 2nd Judicial District covering Denver, Colorado from 2005-2017. Prior to 2005, Mitch was a trial lawyer in the Denver District Attorney’s office. Mitch is internationally recognized for his expertise in DNA technology and applying that technology to solve crimes.

Chris Brown is the Vice President of Policy and Research with CSI where he leads the research efforts of CSI to provide insightful, accurate, and actionable information on the implications of public policy issues throughout the state of Colorado.

Alexa Eastburg is a Research Analyst with Common Sense Institute. Her experience covers analyzing workforce, crime, and education issues in the state of Colorado.

Brett Barkey is a Research Analyst with Common Sense Institute. Brett is the former two-term District Attorney for the 14th Judicial District in Colorado and is currently pursuing his PhD in Economics from Colorado State University.

CSI is committed to independent, in-depth research that examines the impacts of policies, initiatives, and proposed laws so that Coloradans are educated and informed on issues impacting their lives. CSI’s commitment to institutional independence is rooted in the individual independence of our researchers, economists, and fellows.

At the core of CSI’s mission is a belief in the power of the free enterprise system. Our work explores ideas that protect and promote jobs and the economy, and the CSI team and fellows take part in this pursuit with academic freedom. Our team’s work is driven by data-driven research and evidence. The views and opinions of fellows do not reflect institutional views of CSI. CSI operates independently of any political party and does not take positions.

*The 2021 data is provisional as the official report from the Colorado Department of Public Health and Environment is expected to release within the next month. 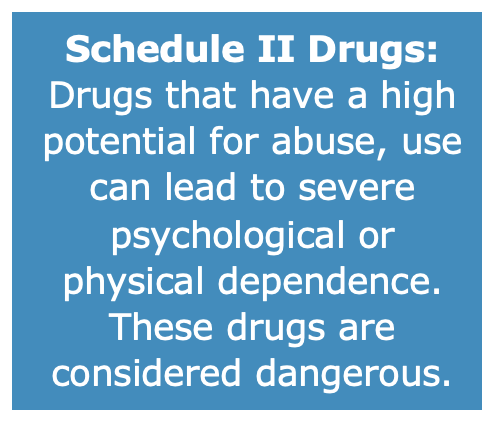 Although the Opioid Crisis has been an ongoing public health issue since the late 1990’s[i], Colorado’s policymakers, law enforcement, district attorneys, addiction rehab advocates, and researchers have recently narrowed their focus on Schedule II Controlled Substances and more specifically, fentanyl.[ii] According to the Colorado Department of Public Health and Environment, there were 222 fentanyl related deaths in 2019 and 540 – a 143% increase- in 2020. Fast forward to 2021 and that number increased to more than 800 fentanyl related deaths (an increase of 260% from 2019). 800 is a provisional count, as the final 2021 data will not be released until May 2022.[iii]

In 2019, the Colorado Legislature passed House Bill 19-1263.[v] This bill made the possession of 4 grams or less of most drugs, including fentanyl, a misdemeanor rather than a felony. While policymakers have faced increasing pressure to act on issues related to fentanyl, it was not until late March 2022 that a bill related to fentanyl was introduced – HB22-1326. At the same time drug related deaths have increased rapidly, crime rates have also surged as previous CSI reports have shown.

Fentanyl is Far More Lethal Than Other Schedule II Drugs

According to the National Center for Drug Abuse Statistics, fentanyl is the world’s deadliest opioid, being a causing factor of almost half of the world’s overdose deaths.[vi] The United States Department of Justice states that fentanyl is 80 – 100 times more powerful than morphine and 50 times more potent than heroin.[vii] The following table contains the lethal dosages of some of the Schedule II drugs including cocaine[viii], codeine[ix], fentanyl[x], heroin[xi], meth[xii], and morphine[xiii] and compares those weights to the lethal dose of fentanyl.

On April 6, 2022, the Drug Enforcement Administration sent a letter to all local, state, and federal law enforcement regarding the nationwide increases in fentanyl related mass-overdose events.[xiv] A fentanyl related mass-overdose event is when three or more overdoses occur at the same location and close in time. Mass overdose deaths are not unique to Colorado; nationwide, the DEA cites 7 mass overdose events in 2022 involving 58 overdoses and 29 deaths. Two of these occurred in Colorado cities, Commerce City and Cortez, entailing nine overdoses, eight of which were fatal. The following table depicts drug overdoses in Colorado and the share of fentanyl overdose deaths using the Colorado Department of Public Health and Environment data.[xv]

If a person has died as a close cause of using or consuming the Schedule II drug purchased, the person who distributed, manufactured, dispensed, or sold the drug is subject to a level 1 drug felony. The table below depicts the level of drug felony applicable to the amount confiscated. A level 1 felony charge is the highest level of six classification levels.

HB22-1326 includes the implementation of a policy for schools to acquire and maintain supply of non-laboratory synthetic opiate detection tests on all school grounds. To support the cost of this, the bill makes an appropriation of $300,000.[xviii] In addition to detection tests, the bill requires the Department of Public Health and Environment to create and implement a statewide fentanyl prevention and education campaign. According to the fiscal note, the bill requires an appropriation of $20 million to the opiate antagonist bulk purchase fund, $6 million to the harm reduction grant program cash fund, and $3 million to help fund the jail-based behavioral health services program.[xix] All of the required funding would come from the Behavioral and Mental Health cash fund, totaling $29.3 million in required appropriations.

The treatment section requires a jail to provide prescription medication for any opiate use disorder to those who need it when released. HB22-1326 also requires community corrections programs to provide medical detoxification monitoring, medical treatment, and any other withdrawal management care while a person with substance use withdrawal symptoms is residing in the program.

The Economic Cost of an Opioid Overdose 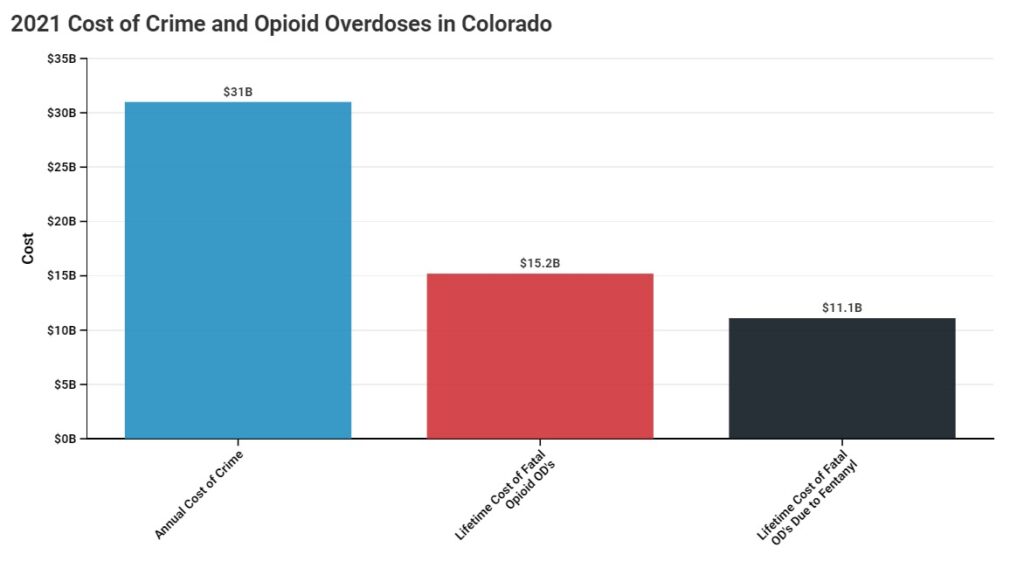 Colorado, Wyoming, and Utah have the potential to elevate possession of a Schedule II controlled substance to felony level. In Colorado, that occurs if a person is convicted of possessing more than four grams. In Wyoming, that is possible if the person is convicted of possessing more than 3 grams in pill form. Both Wyoming and Utah increase penalties to felony level upon the third or subsequent conviction for possession.

Although softening of drug possession from felony to misdemeanor has taken place in several states over the last decade, one state, North Carolina recently has reversed the trend. In 2021, after a surge of overdose deaths in North Carolina, the North Carolina legislature made possession of Schedule II controlled substances a felony.

Public Policy Accountability – What is the Connection Between Growth in Fentanyl, and Crime?

CSI’s previous work on crime has recommended that a data dashboard should be created that helps provide deeper insights into how recent policy changes, and trends within our criminal justice system may be impacting the growth in certain crime rates. While there are several very helpful state websites that report different aspects of the criminal justice system, or the change in vital statistics, such as drug overdoses, they do not connect with the criminal offense data.

Such a tool that could successfully link data across different systems, would be an extremely powerful tool for the community, researchers, and policymakers to combat both the crime and fentanyl/opioid crisis.

While previous CSI crime reports have discussed the type of data that would be most helpful to understand the connections between crime and such trends as a declining correctional population, growing use of personal recognizance bonds or offenders with multiple arrest, here are a few examples of information that could be reported to understand changes in drug related policy and crime.

Having this data would allow for research to be conducted on the connection between drug use and Colorado’s crime rate. With crimes in Colorado increasing at a rapid rate of almost 9% in 2021,[xxiv] the costs to Coloradans will only continue to grow, if a more nuanced look is not taken at how system changes impact system outcomes.

[viii] What Is A Lethal Dose Of Cocaine? – Addiction Resource

[xi] How Much Does It Take To Cause A Lethal Drug Overdose? – Addiction Resource

[xii] What Is A Lethal Dose Of Methamphetamine? – Addiction Resource

[xxi] Update: The Colorado Crime Wave Did Not Recede In 2021 An Economic Analysis of Crime | Common Sense Institute

[xxiv] Update: The Colorado Crime Wave Did Not Recede In 2021 An Economic Analysis of Crime | Common Sense Institute