Update: The Colorado Crime Wave Did Not Recede In 2021 An Economic Analysis of Crime

Mitch Morrissey served as the elected District Attorney for the 2nd Judicial District covering Denver, Colorado from 2005-2017. Prior to 2005, Mitch was a trial lawyer in the Denver District Attorney’s office. Mitch is internationally recognized for his expertise in DNA technology and applying that technology to solve crimes. He has trained law enforcement officers and prosecutors throughout the United States, the Middle East, Central America, and Canada.

Chris Brown is the Vice President of Policy and Research with the Common Sense Institute where he leads the research efforts of CSI to provide insightful, accurate, and actionable information on the implications of public policy issues throughout the state of Colorado.

Alexa Eastburg is a Research Analyst with Common Sense Institute. Her experience covers analyzing workforce, crime, and education issues in the state of Colorado.

Common Sense Institute was founded in 2010 originally as Common Sense Policy Roundtable. CSI’s founders were a concerned group of business and community leaders who observed that divisive partisanship was overwhelming policymaking and believed that sound economic analysis could help Coloradans make fact-based and common sense decisions.

CSI is committed to independent, in-depth research that examines the impacts of policies, initiatives, and proposed laws so that Coloradans are educated and informed on issues impacting their lives. CSI’s commitment to institutional independence is rooted in the individual independence of our researchers, economists, and fellows.

At the core of CSI’s mission is a belief in the power of the free enterprise system.  Our work explores ideas that protect and promote jobs and the economy, and the CSI team and fellows take part in this pursuit with academic freedom. Our team’s work is driven by data-driven research and evidence. The views and opinions of fellows do not reflect institutional views of CSI. CSI operates independently of any political party and does not take positions.

We would like to give a special acknowledgement to Dr. Ted Miller of the Pacific Institute for Research and Evaluation in Beltsville, Maryland. Dr. Miller and his co-authors’ 2021 article in the Journal of Benefit-Cost Analysis, “Incidence and Costs of Personal and Property Crimes in the United States, 2017,” served as the foundation for the estimates on the cost of crime in Colorado. Dr. Miller was gracious with his time and expertise to ensure we appropriately replicated his methodology while account for differing data constraints.

In December 2021, Common Sense Institute Criminal Justice Fellows Mitch Morrissey and George Brauchler issued a study on the crime wave impacting Colorado. At the time, complete 2021 crime statistics for the state were not yet available. According to the Colorado Crime Statistics, there is a two-month lag in data entry. For example, complete December 2021 data was not available until March 2022. The CSI 2021 report “The Colorado Crime Wave: An Economic Analysis of Crime and the Need for Data Driven Solutions” included data through August 2021. This follow-up report adds in data from September through December of 2021, covering all 12 months.

The undeniable and blistering increases in crime in Colorado continued throughout 2021. The impact is greatest on the growing number of victims. However, the full costs of crime are borne by all Coloradans through public tax dollars, lost economic opportunity and diminished quality of life.

CSI’s December 2021 report significantly heightened awareness of the problem among the public, policymakers, and the media. Evidence of major changes to pre-trial bonding, the state’s correctional population, and the rates of individuals being arrested multiple times, pointed towards reduced accountability throughout the criminal justice system. The data demonstrating Colorado’s crime wave remains undisputed.

So, what can be done? Colorado’s lawmakers successfully confronted out of control crime in the 1990s. The time has come to do so again. 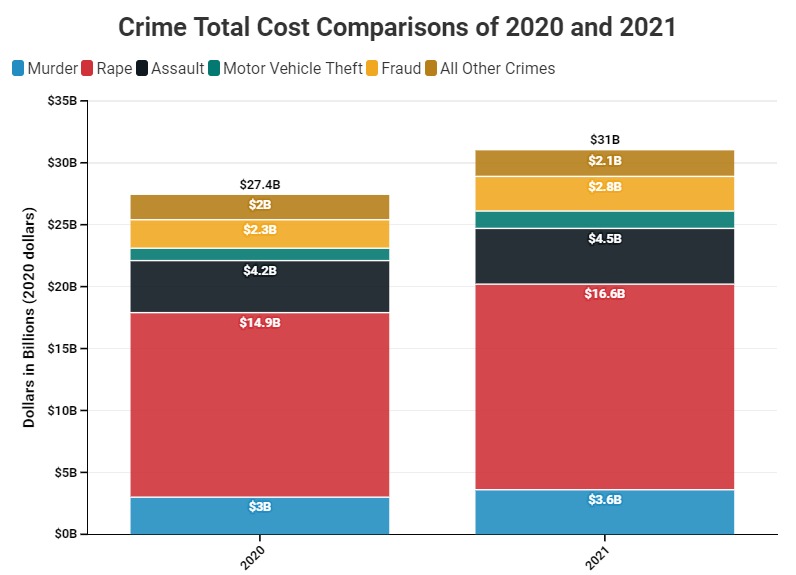 2021 Cost of Crime in Colorado

The 2021 paper titled “Incidence and Costs of Personal and Property Crimes in the United States, 2017,” published in the journal of Benefit-Cost Analysis, estimated the total cost of crime in the United States to be $2.6 Trillion in 2017. In consultation with the primary author of that paper, Dr. Ted Miller with the Pacific Institute for Research and Evaluation (PIRE), and the use of his cost of crime model calibrated for Colorado, the 2020 cost of crime in Colorado was estimated to be $27B as published in CSI’s December 2021 report.

The intangible costs of crime account for 68% of total costs. While these costs don’t measure a direct transaction value, they do measure the relative costs borne by victims of crime and those in higher crime areas, who suffer negative consequences related to behavioral decisions and mental health. 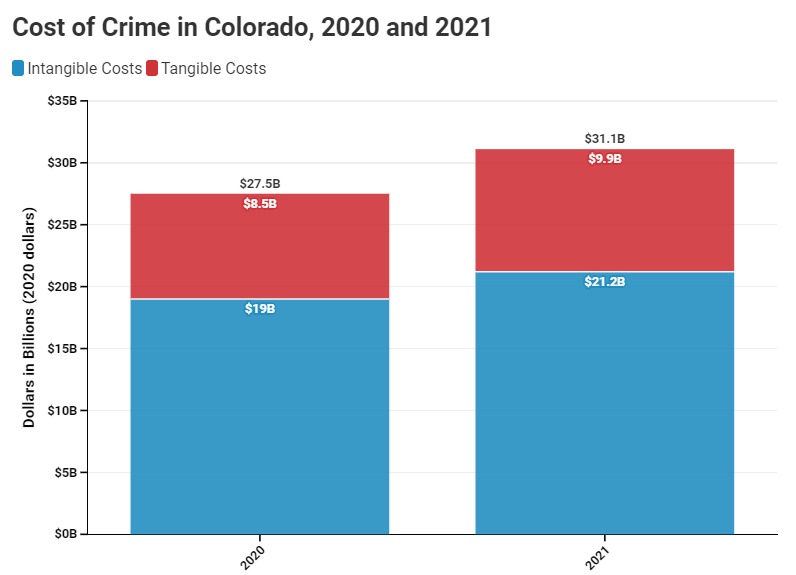 Figure 2 in the Appendix shows the relationship between police reported and total crime counts. The largest difference in these categories includes sexual assaults and fraud.

The 2021 crime rates as reported through December 31st, 2021, were pulled from Colorado Crime Statistics webpage on March 4th, 2022. The data reflects a concerning and unabated increase in crime across Colorado. The total, population adjusted crime rate, reported as the number of crimes per 100,000 Coloradans, increased by 8.7% in 2021, more than double of 2020’s 4% growth rate. The combined two-year increase in Colorado’s overall crime rate since the start of the pandemic is 13%.

The Colorado Crime Statistics releases data related to crimes in Colorado on a rolling basis. There is an approximate 60-day reporting window from law enforcement agencies to the public website, equating to a two-month lag in more complete monthly data. The FBI will report the 2021 figures later in the year, therefore the estimates of crimes through December 2021 used in this report are viewed as preliminary, yet likely very close to the final figures.

While the overall increase in crime rates was significant, the change across categories of crimes varied 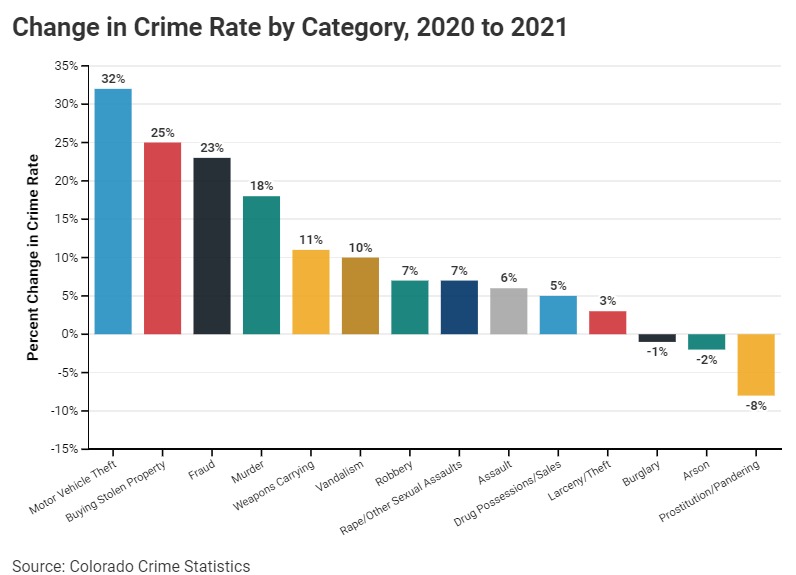 86% of Colorado’s 2021 population residing in the 12 most populous counties of Adams, Arapahoe, Boulder, Broomfield, Denver, Douglas, El Paso, Jefferson, Larimer, Mesa, Pueblo, and Weld. Yet those same counties are home to 93% of the property crimes (including 97% of all motor vehicle thefts), and 89% of crimes against a person, which includes violent crimes.

The charts below contain more details across counties, however there are several important insights to note. 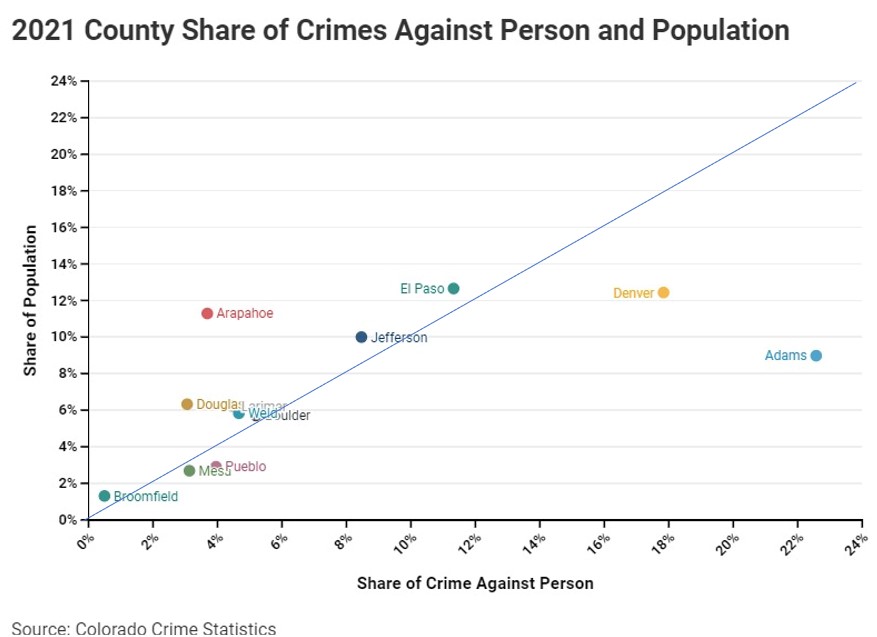 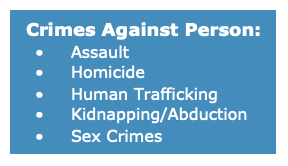 Five of the twelve counties analyzed had a growth rate in their crimes against person above the state average, while seven fell below. Only three counties experienced a decrease in the rate as shown in the figure below. 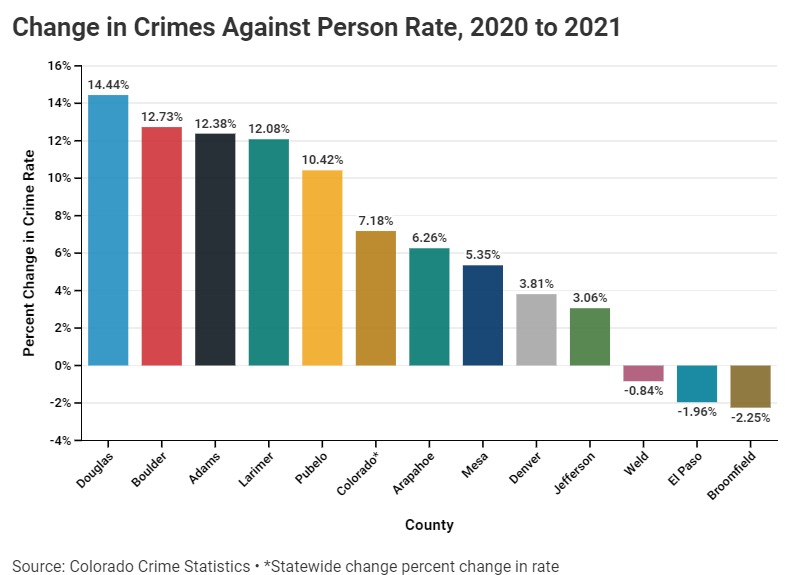 Similar to the rate of crimes against persons, crimes against property rose in 2021, though at nearly twice the rate. Both Pueblo and Denver experienced a rate increase of approximately 27%, more than double the statewide average rate of 12%. Just two counties, Mesa and Larimer, experienced a decline in their property crimes rate.In 2021, Adams and Denver County had 21% of the state’s population, yet 54% of all motor vehicle thefts. Pueblo is the only other county that has a higher share of motor vehicle theft than population, though to a much less degree than Adams and Denver counties. 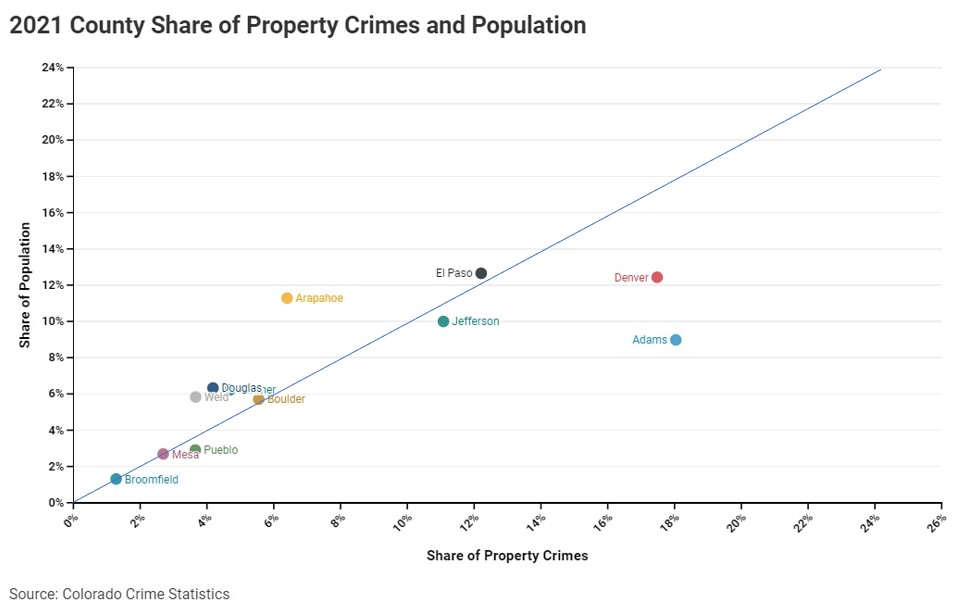 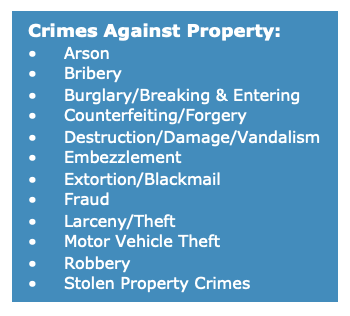 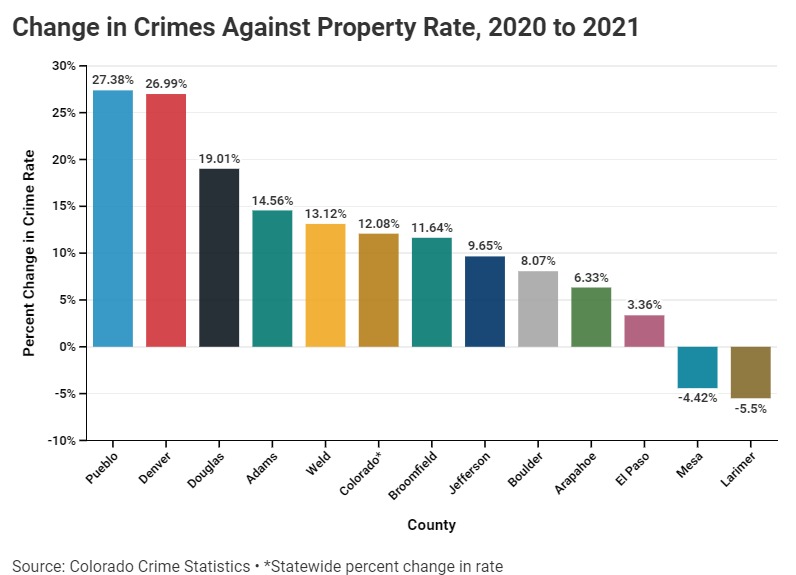 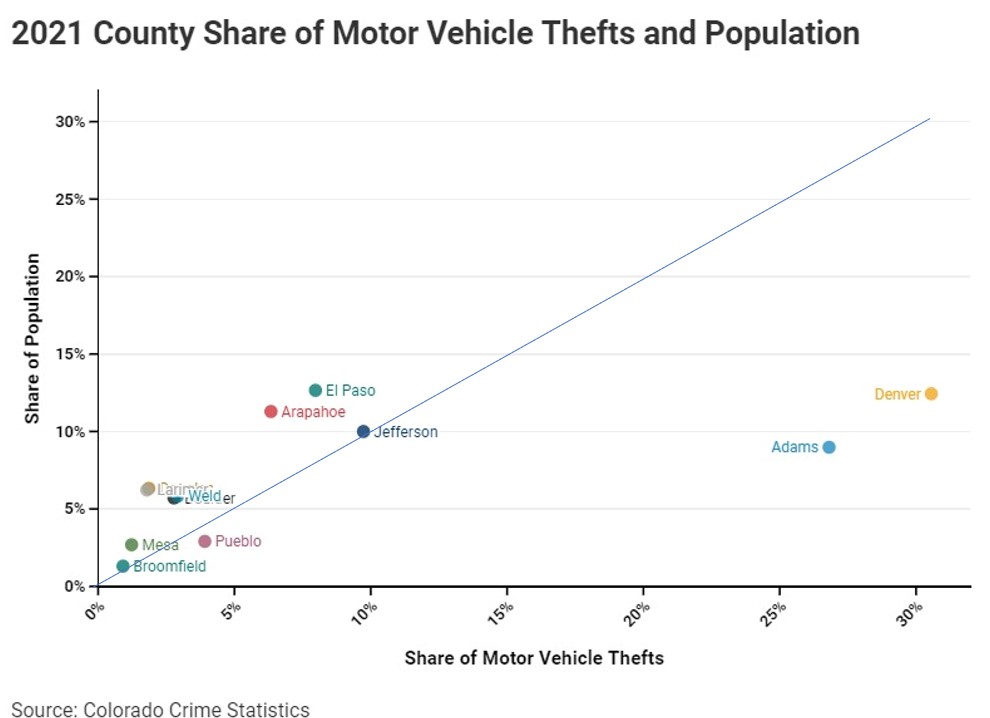 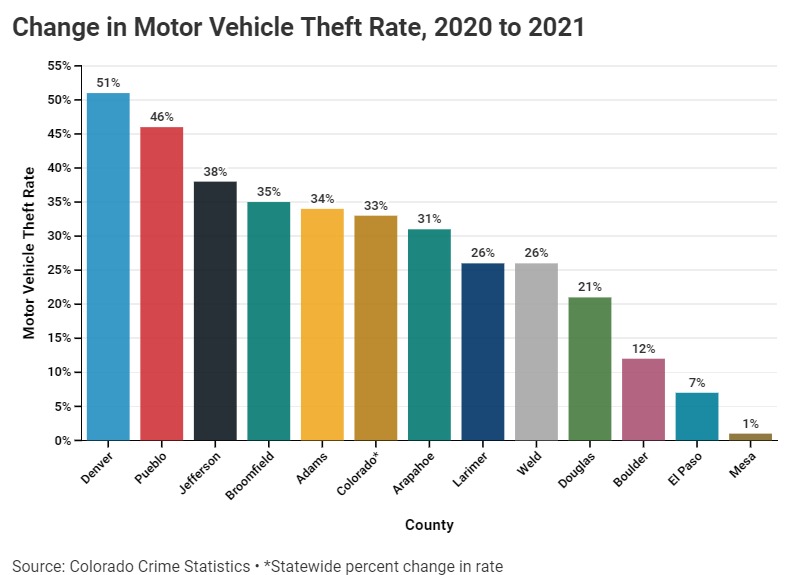 CSI’s December 2021 report highlighted several changes within the Colorado criminal justice system, that could be key contributors to the rising crime rates in Colorado.

Those documented and concerning trends included:

The report’s primary solutions offered in previous report included both the evaluation of policy impacting the areas that are showing concerning trends, along with the creation of a public-facing data dashboard that displays the extent to which criminal offenses are being committed by individuals who were previously connected to the criminal justice system.

Since the release of the December 2021 crime report, another important trend has come to light, rising to the forefront of the policy discussion. With the 2019 decriminalization of certain drugs, including the highly potent and lethal drug of increasing prevalence fentanyl, there have been growing calls to revisit this law, and its impact on the growing opioid related public health crisis and growing crime rate.

HB19-1263 titled the “Offense Level For Controlled Substance Possession”  decriminalized the possession of four grams or less of a Schedule II controlled substance, including fentanyl, from a felony to a misdemeanor.

In the cost of crime analysis, there are many areas of cost that are not included in the model. This is especially true when it comes to discussing the public health and human costs of the use of illicit drugs. The social and economic costs that come with drug use, drug addiction, overdoses, and deaths related to drugs are substantial. Because the cost model does not take these types of costs into account, the overall cost of crime in Colorado is likely even larger than calculated in this report.

Legislation this session must be evaluated based on its potential to generate an immediate and meaningful impact on Colorado’s rising crime rates. 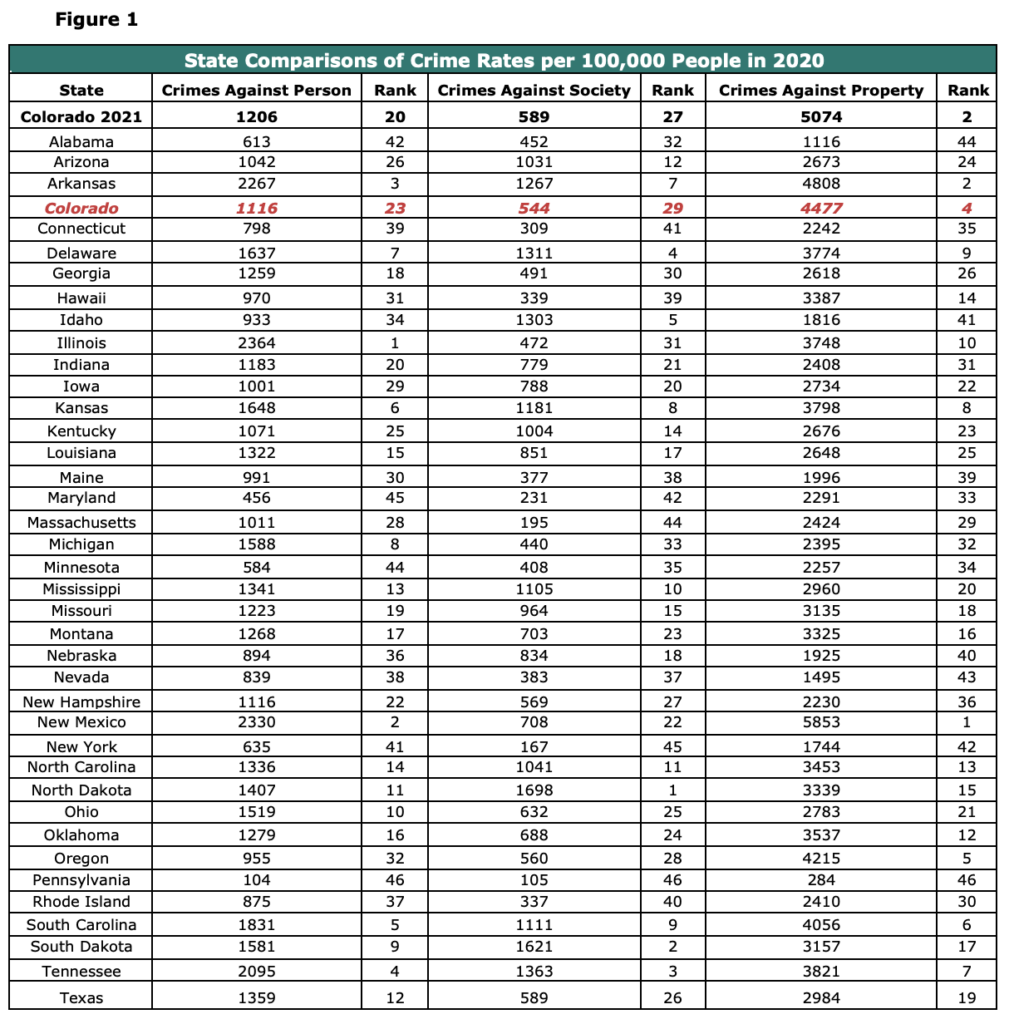 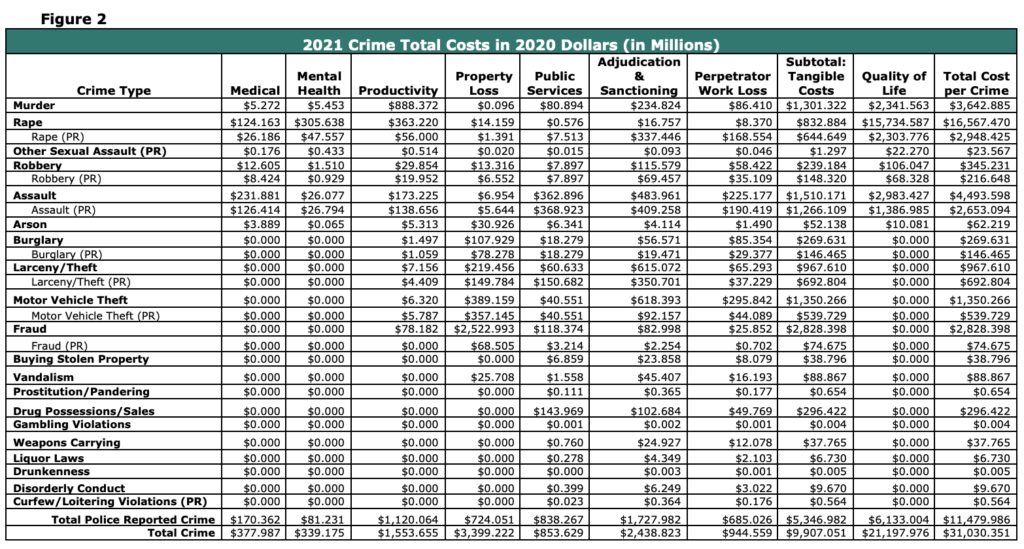 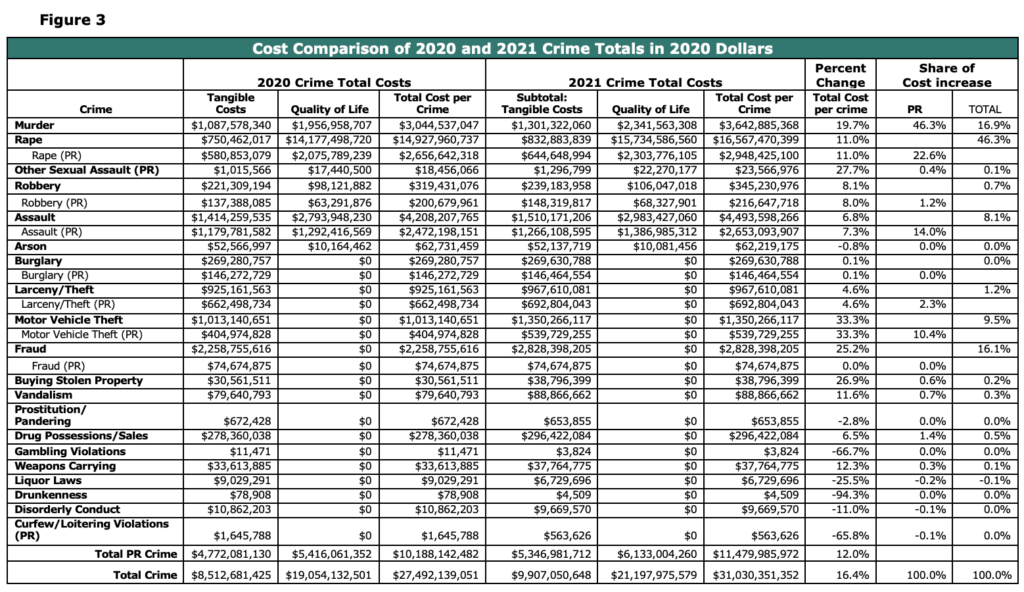 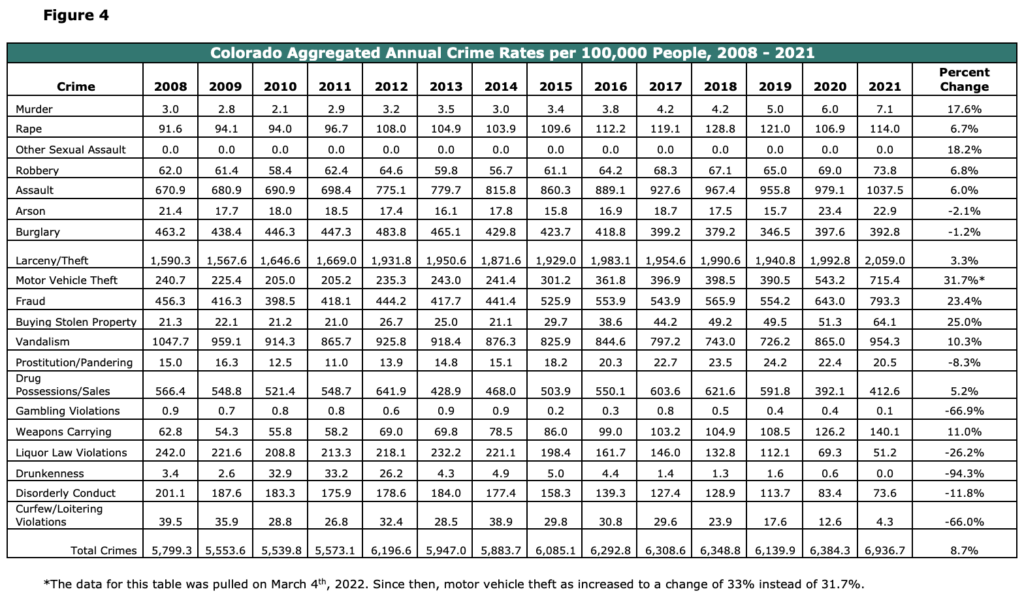 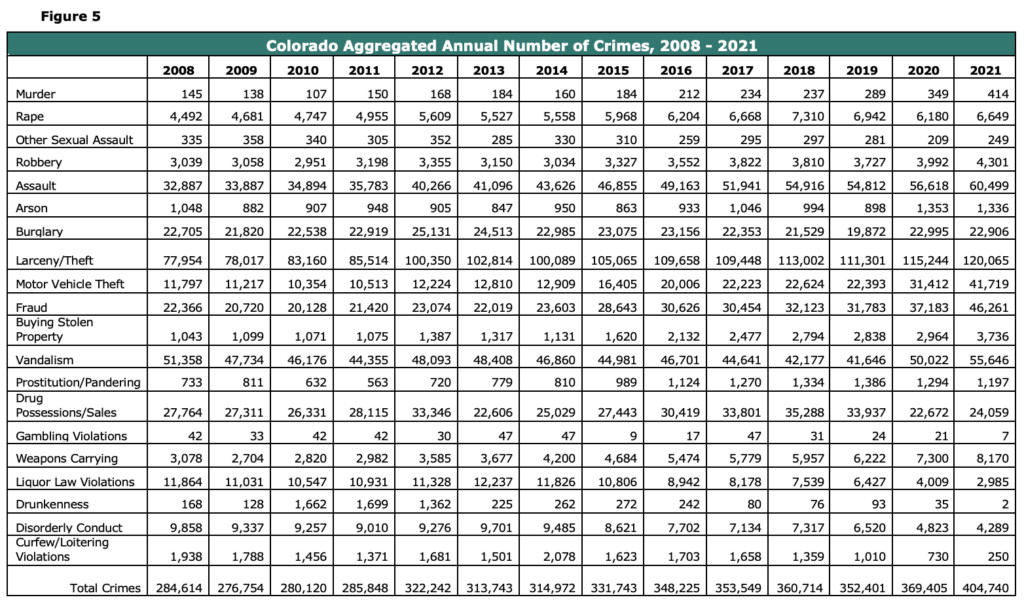 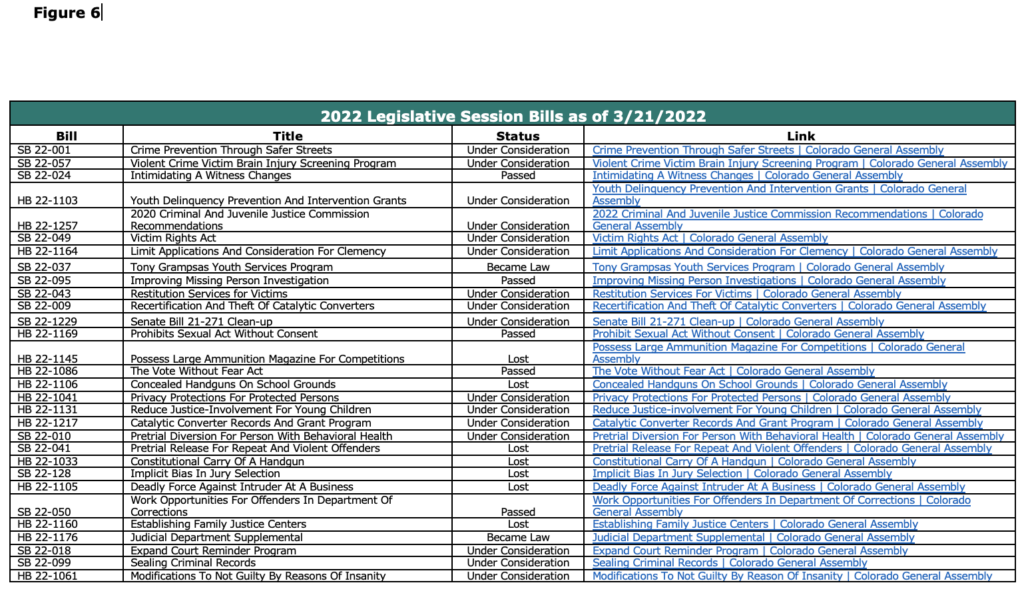 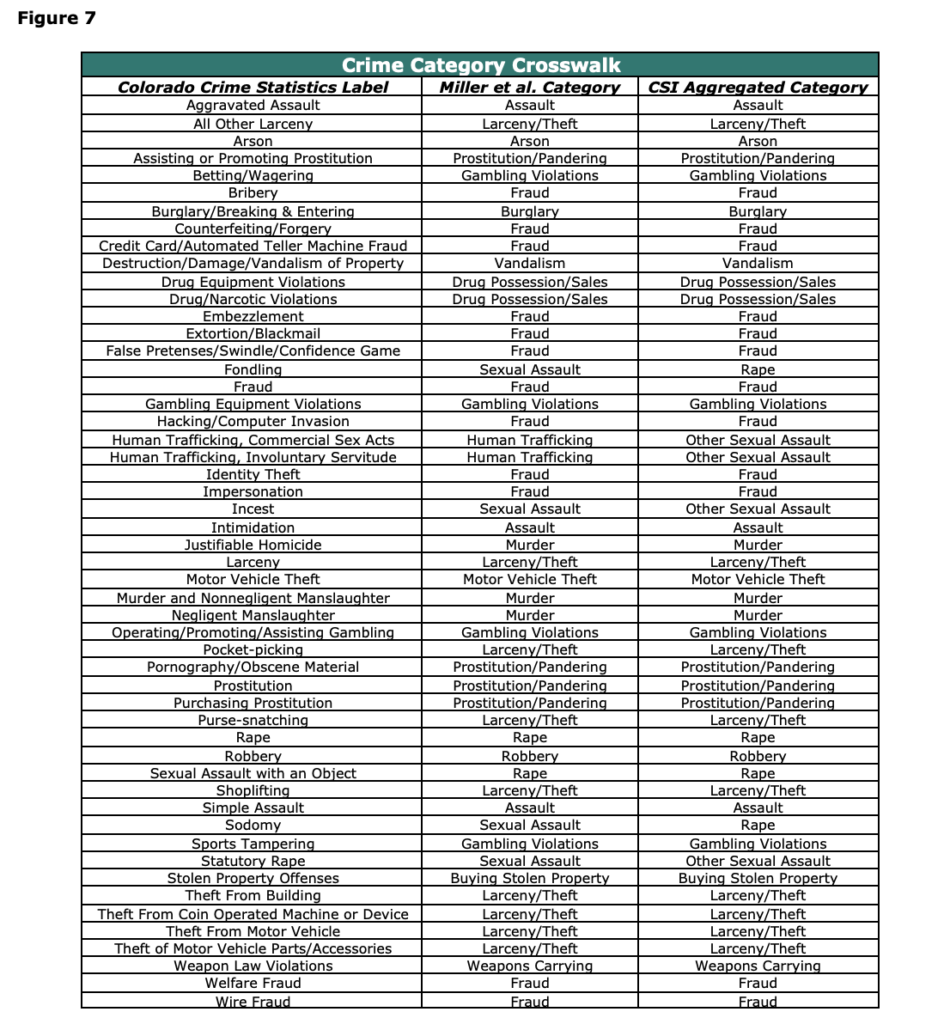