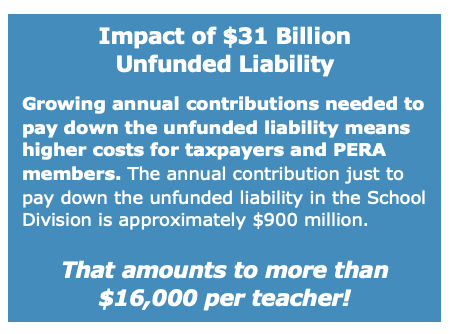 PERA’s current unfunded liability is $31 billion. This is one indicator of PERA’s funding status as it measures the difference between projected benefit demands, and the assets (current fund balance + future expected returns) that have been collected to cover those benefits.

Despite the passage of SB18-200 in 2018 which was intended to put PERA back on a 30-year amortization period, PERA’s declining funding status has already triggered 2 of the allowable 4 automatic increases in employee and employer contribution rates and reductions in retiree cost of living adjustments.

A key provision of ensuring PERA stayed on its desired 30-yr amortization window included an annual $225 million payment from the state’s general fund.

Impact of Missing the 2020 Payment

PERA has reported that the legislative decision to not make the $225 million direct distribution to PERA on July 1, 2020 as was obligated under SB200, increased the unfunded liability by $993 million across all divisions.

The decision to forgo the 2020 direct distribution was made at a time of high economic and budgetary uncertainty. However, rather than experience revenue declines, the state of Colorado has seen rapid revenue growth, combined with historic levels of federal transfers. HB22-1029 proposes to utilize the growth in state revenues to make up for the missed 2020 direct distribution to PERA plus the lost investment returns.[i]  If passed, the $303.57 million transfer to PERA would produce significant long-term benefits and reduce some of the risk to taxpayers, teachers and other PERA employees of future cost increases.

While 2021 is expected to be another very positive year for PERA’s investment performance, it still relies on a target rate of return of 7.25%, which now ranks above the national average investment return assumption after two decades of consistent revisions downward.[ii]