ABOUT THE REMI PARTNERSHIP
A partnership of public and private organizations announced in July 2013 the formation of a collaboration to provide Colorado lawmakers, policy makers, business leaders, and citizens, with greater insight into the economic impact of public policy decisions that face the state and surrounding regions. The parties involved include the Colorado Association of REALTORS®, the Colorado Bankers Association, Colorado Concern, Common Sense Policy Roundtable and Denver South Economic Development Partnership. This consortium meets monthly to discuss pressing economic issues impacting the state and to prioritize and manage its independent research efforts.

COLORADO’S INFRASTRUCTURE AS AN INVESTMENT

Colorado’s transportation network is vital to the success of the Colorado economy. Companies depend on efficient, low cost and reliable infrastructure to transport goods and services throughout the state and rest of the country. Equally, individuals rely on transportation infrastructure to get to and from work, and to escape to the mountains at our doorstep.

In the latest annual report released by TRIP, a national transportation group, they estimate that the resulting higher vehicle operating costs from congestion and deteriorating roads costs over $7.1 billion annually or $468 per driver statewide. The TRIP study also finds an estimated 20% of major urban roads and highways are in poor condition and 20% are in mediocre condition. Along with surface roads, 6%, or 488, of all bridges are structurally deficient. This forces lower weight restrictions for vehicles driving over these bridges causing additional delays.1

The transportation analytics firm INRIX ranks Denver 14th out of the 25 top-ranked most congested U.S. cities according their impact factor index accounting for traffic congestion. The total number of daily miles traveled in the Denver region has grown 12% since 2006. While the number of miles driven daily per capita saw a decline between 2006 and 2013, in the last several years that number has steadily increased. This is significant in that it indicates that the growth in the number of miles we are driving daily is growing faster than overall population.

As a major goal of DRCOG, the Denver regional transportation planning authority, reducing per capita VMT will also help alleviate growing congestion issues. Smarter land use policies and developments that offer more affordable housing options in existing urban areas and employment centers will help control future costs of maintaining roads. INRIX concluded the total cost of congestion is $1.2 billion annually in Denver while TRIP estimated similar costs at $1.19 billion. But even as a more efficient land use pattern is needed, there is no avoiding the benefits of improving Colorado’s transportation network. Ensuring that our transportation infrastructure can adequately and safely facilitate the travel of commuters and businesses is truly an investment worth making. Reducing the amount of time it takes to get from point A to B is a tangible cost savings to businesses and commuters. Through lower fuel costs and fewer hours per trip, having a more efficient road network is a significant social and economic advantage.

To add new capacity that expands the ability to move more vehicles through the system, it is expected that the state will need to find additional revenue beyond what CDOT is currently routinely allocated. In fiscal year 20017 roughly 61%, or $875.5 Million, of CDOT’s budget was spent on just maintaining the existing road network. Another 23%, or $333.6 Million, was spent on operations according to the final draft of Proposition 110 Legislative Council analysis for the blue book. Only 5.8% of all spending was used to expand the state’s current road network.2

Given these economic and fiscal challenges, through legislative action and citizen led ballot initiatives, Colorado voters are faced with several options for how to address the state’ transportation issues this fall.

Appearing on the November 2018 ballot are two propositions providing alternative paths forward on transportation infrastructure spending. Proposition 109 offers the opportunity to require the legislature to find an annual average of $260 million from existing revenue to pay for a $3.5 billion bond to fund a list of highway projects. Proposition 110 offers the opportunity to dedicate a 20-year increase of an additional 0.62% in the state sales tax to generate an annual average of $1.04 billion in new revenue to be spent across highway projects, multi-modal projects and municipal and county projects. Due to Senate bill 1, passed out of the Colorado legislature earlier this year, a “No” vote on either of these measures would mean that in 2019 Colorado voters would be faced with another ballot question to allow the Colorado Department of Transportation to issue $2.3 billion worth of bonds and use money already set aside by the Colorado legislature to make the annual bond payments. Here is an overview of what each proposition on the 2018 ballot would do. 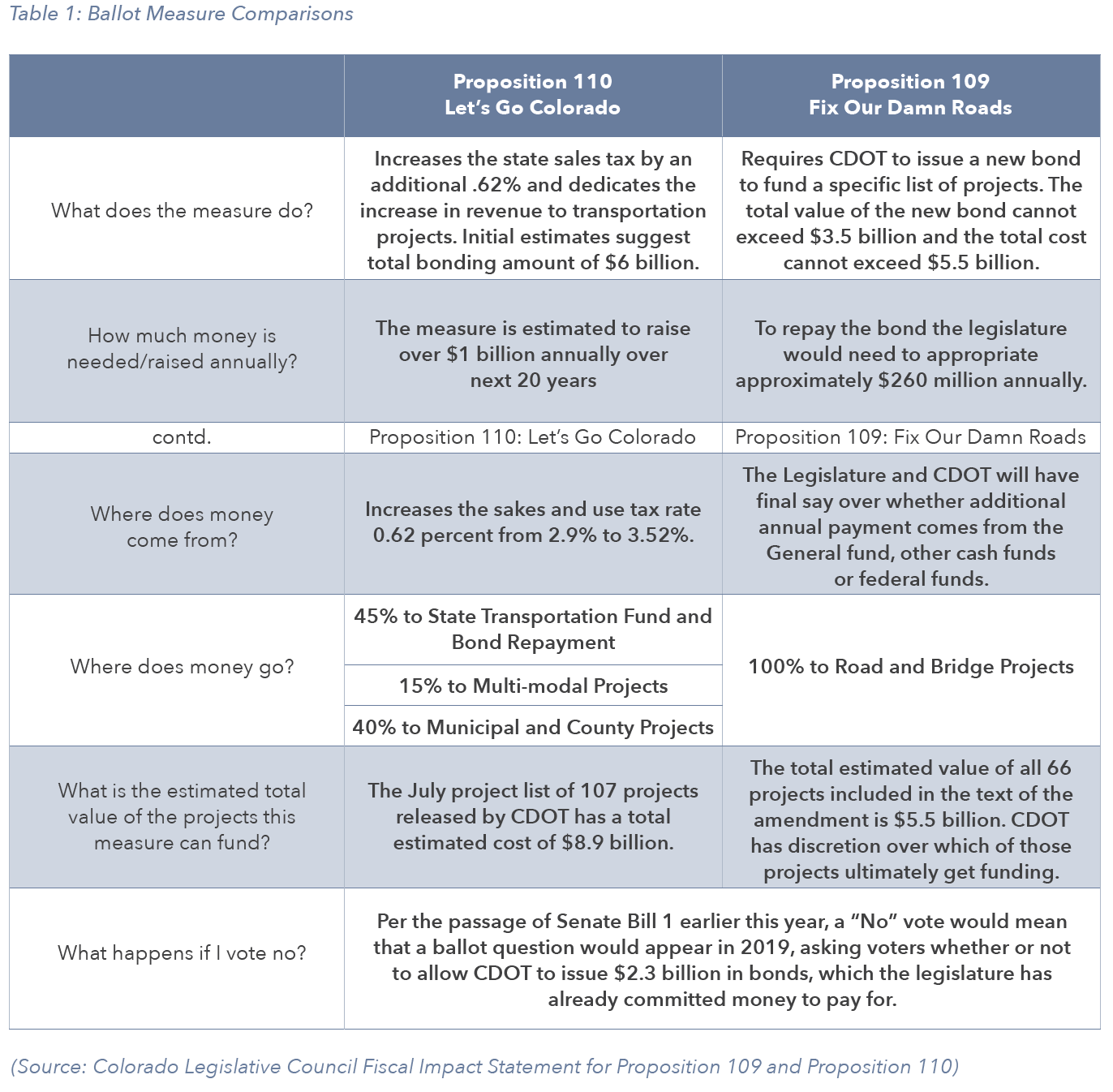 The significant difference in the amount of funding and type of projects receiving funding can be seem in Figure 1. 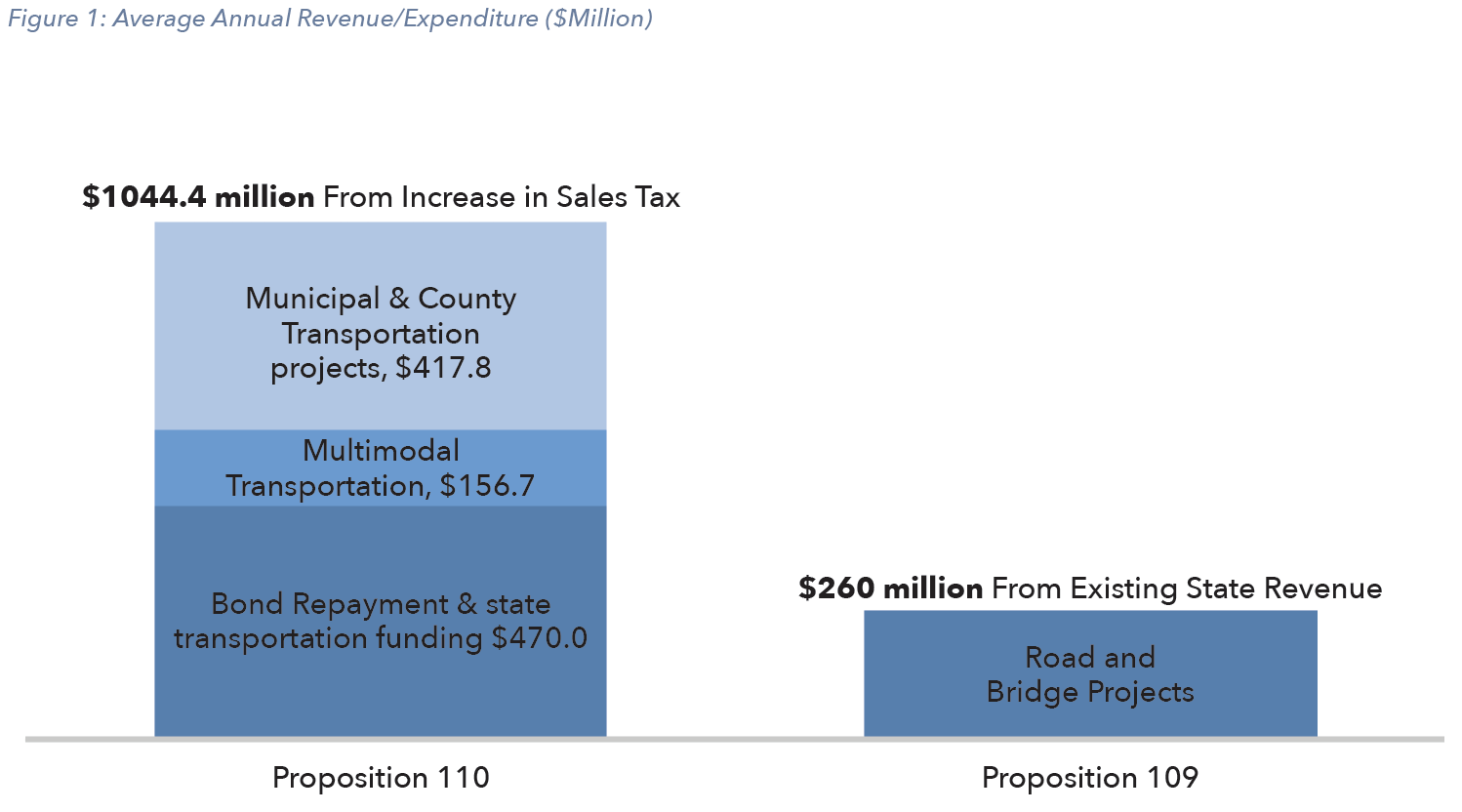 There are 66 road and bridge projects identified in the language of proposition 109. CDOT would have final discretion over exactly which would receive funding if proposition 109 were to pass. CDOT has issued a list of 107 projects that they currently believe would be funded if proposition 110 were to pass. While less than half of the new revenue would go to CDOT, it is unclear at this time exactly which projects under the categories of multi-modal and county or municipal would likely receive funding.

The total cost estimate of projects in Proposition 109 is $5.57 billion. 42% of the total cost, including 17 projects, would be in the Great Denver Area. The total cost estimate of CDOT projects accompanying proposition 110 is close to $9 Billion. 39% of the cost, across 29 projects, would be in the Denver Metro Area. While the Northwest and Southwest regions receive 18% of the expenditure, they have 43% of the total number of projects. Based on available information, 73% of the projects are in the conceptual, planning and scoping stages.

Much of the success of the Colorado economy will depend on the reliability and ease of use of the state’s transportation network. With the recent growth in population and the economy, the current cost of congestion is very high, and only projected to rise. Current funding levels will not allow for CDOT to make investments in new capacity which has left Colorado voters with three decisions this November. To support one of the propositions on this year’s ballot or to push the decision to next year’s ballot where a lower amount of bonding for CDOT will be requested.