The Steep Price Tag of the 2021 Legislative Session:

The Challenge of Economic Recovery Continues to Grow under New Regulatory Burdens and More than $2.1 Billion in New Taxes and Fees

Despite tax revenue to the state’s General Fund rebounding to more than $2 billion above pre-pandemic levels[i] and a surge of more than $65 billion in federal funds to Colorado, the 2021 legislative session, which ended June 8th, resulted in an additional net tax burden of $302 million (in FY23) on individuals and businesses. New fee-based revenue from the 2021 session is projected to be over $255 million annually. This figure is relevant to two ballot measures passed in 2020.

Overall, the 2021 legislative session resulted in an additional $699 million dollars in new taxes and fees, but, through both an increase in income tax deductions and a temporary 2-year property tax cut, there is also a projected $397 million in tax cuts in FY23. 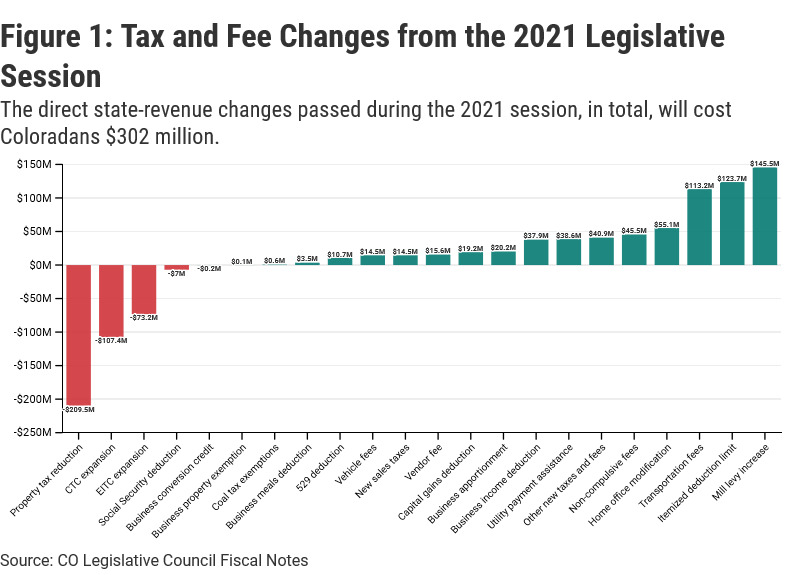 New net direct costs, which will exceed $2.1 billion in 2023, comprise only part of the financial burden facing Coloradans and Colorado businesses—they do not include the indirect costs of numerous new laws and regulations. While the impact of each new regulation has not been fully valued yet, efforts to comply with them will cost many individuals and businesses billions of dollars in total, likely even more than the $2.1 billion in direct costs. Though any single new regulation may not change the outcome of a firm’s decision to expand in Colorado or to relocate to our state, at some point the cumulative regulatory burden could.

The full cost of each piece of legislation is not quantified, but here is a summary of some of the most impactful changes:

New Taxes and Fees Will Increase by Over $2.1 Billion 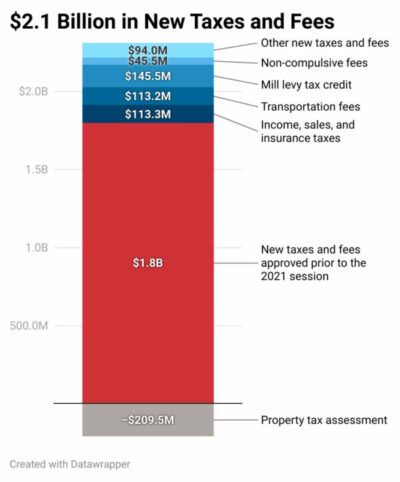 The increase in taxes and fees during the 2021 legislative session is only the latest in a series of new taxes and fees enacted during the last few years. In March 2021, CSI released “Colorado’s Competitiveness: The Challenge of Economic Recovery under More than $1.8 Billion in New Regulations, Taxes and Fees,” which detailed the many tax and fee increases new to Colorado since 2018. The research found that, in total, individuals and businesses are expected to pay approximately $1.8 billion more in taxes and fees over the next few years as a result of recently passed policies. Taxes paid by businesses to the Unemployment Insurance Trust Fund annually, for example, are expected to increase by more than $500 million within the next two years to pay off the more than $1 billion in federal loans and to replenish the fund. Under the additional impact of this year’s legislative action, the total net direct cost of rules and legislation passed since 2018 is now over $2.1 billion. 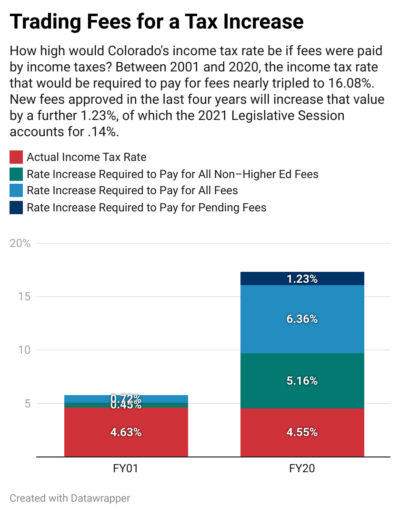 Direct Annual Costs of New Tax and Fee Proposals Passed during the 2021 Legislative Session: $699 Million in New Taxes and Fees and $397 Million in Tax Cuts

Laws Passed since 2019 that Authorized Present or Pending Regulations:

This bill set in motion a decades-long rulemaking process which has produced many regulations, including the following:

There are many more regulations yet to come as a result of HB19-1261.

[1] Total new fees ($2.2B) is higher than total NET new taxes and fees ($2.1B) as there are several tax revenue reductions that partially offset the increase in fees.

[2] The fiscal note has not yet been updated similarly, but this number reflects that the annuities adjustment, worth $59.3 million of state revenue according to the May 25th estimate, was removed by a Senate amendment.

[ii] The cap on tax-deductible contributions to college savings accounts was raised from $10,000 to $30,000 since the release of the May 25th fiscal note. This change lowers the net revenue effect of the bill by up to $10.7 million, but the state has not yet estimated its actual value.