Chris Brown is the Vice President of Policy & Research with Common Sense Institute where he leads the research efforts of CSI to provide insightful, accurate and actionable information on the implications of public policy issues throughout the state of Colorado.

Erik Gamm is a Research Analyst with Common Sense Institute where he supports the research efforts of CSI. Erik graduated from the University of Michigan in 2020 with a Bachelor of Arts in Economics.

Common Sense Institute was founded in 2010 originally as Common Sense Policy Roundtable. CSI’s founders were a concerned group of business and community leaders who observed that divisive partisanship was overwhelming policymaking and believed that sound economic analysis could help Coloradans make fact-based and common sense decisions.

As of May 12, 2021 the authors of HB21-1232 have removed the so-called “public option” from the original bill, after frontline medical workers and other stakeholders warned such a measure would trigger budget cuts across the Colorado healthcare sector and undermine private health plans. These impacts were featured in our previous reports on public option proposals in Colorado including, “Third Time is No Charm” which modeled the potential financial and economic impacts of HB21-1232 as originally introduced.

The amended version of HB21-1232 relies on mandates on private insurance carriers to sell the Colorado option plan and reverts to similar, or even lower, government-set medical provider rates featured in the 2020 public option legislation. While there are important new details in the revised bill, its combined use of restrictive premium growth rate caps and low medical provider reimbursement rates will likely lead to a similar problem; government set prices that do not change the underlying cost of delivering care. As a result, it will force medical providers to cut spending in a way that negatively impacts access and quality, or it will force them to increase the cost shifting that already occurs in health care thereby increasing prices for commercial payers. 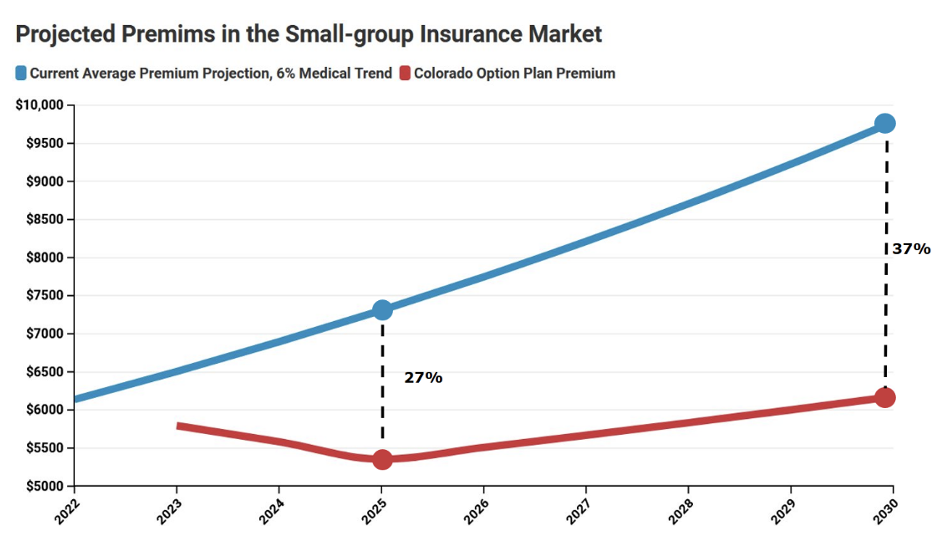 The amended version of HB21-1232 requires premiums for the Colorado option to be set 18% lower than the 2021 average in the individual and small-group insurance markets, with some allowance for medical inflation. However, the bill’s definition of medical inflation would currently impose a cap of 2.9%, which is much lower than forecasts and even lower than the 10-year historical average of individual market premium growth of 7.6%. Under a scenario where the cost of treating patients grows at 6% annually but the cap stays at 2.9%, the premium reduction target from the actual baseline is 27% lower in 2025 and 37% lower in 2030.

In effect, this means the real premium reduction target under HB21-1232 may be 1.5 to 2 times greater than is widely understood. Failure to comply would trigger an expansion of government price mandates from insurance premiums into medical rate setting, i.e., the state deciding how much hospitals should be reimbursed for treating patients. Regional cost pressures and market dynamics will vary the likelihood of prompting rate setting across countiesMedical provider reimbursement base rates are lower than any statewide average in the country

If rate-setting is triggered under HB21-1232, the Colorado option would offer a base reimbursement of 155% to 195% of Medicare rates to hospitals serving adult patients. In other states, however, private health plans on average pay 52 to 97 percentage points more – around 247% of Medicare – to overcome the fact that Medicare rates are set below the actual cost of treating patients. Based on research by authors at RAND Corporation, the 155% base rate specified in the Colorado option plan would be lower than all of the 46 states in the study. If the 195% maximum base rate for non-pediatric hospitals under HB21-1232 was applied across the board, the Colorado option would rank in the bottom three among state average private insurance payment rates for hospitals.

Earlier research into rate-setting suggests the amended version of HB21-1232 will have a major impact on hospital budgets across the state. In 2020, prior to the impacts of COVID-19, CSI analyzed a similar, if not higher set of reimbursement rates between 155% and 238% for hospitals under a state-controlled plan, using a model build by Guidehouse. Under this level of rate-setting, estimated revenue cuts to rural hospitals totaled $328 million in single year and cuts to urban hospitals totaled $828 million. Because HB21-1232 imposes more stringent rate-setting with a lower payment limit falling to 135% of Medicare for specific service lines, the budget cuts facing Colorado medical providers under HB 21-1232 would likely be even greater.

The current version of HB21-1232, as amended and passed by the Colorado State House on May 10th 2020, includes an important detail that may appear minor but would have dramatic long-term impacts. The legislation caps the annual growth rate of the Colorado option plan premiums starting in 2025 at what the bill defines as “medical inflation.” Between the years of 2022 to 2024, the bill adjusts the 2021 premium rates using “medical inflation” in-order to calculate the required premium reduction levels.[i]

The following is how the current bill defines medical inflation:

Based on this definition, the adjustment for medical inflation is actually a 10-year average of the national medical care consumer price index. It is not specific to Colorado, nor does it reflect actual cost pressures that arise in any single year. The current estimate for medical inflation as defined in HB21-1232 is 2.9%.[ii]

Allowing for premiums to grow at a rate of medical inflation is meant to address the medical cost trend, or simply “medical trend.” According to the Colorado Division of Insurance, medical trend is defined as “the projected increase in the costs of medical services assumed in setting premiums for health insurance plans.”[iii]

Components of Medical Cost Trends Include:

The challenges for carriers will arise when the allowable annual growth rate in premiums does not reflect actual medical trends. As the following table shows, external projections of medical trend, as well as the actual history of recent premium growth in Colorado, are much higher than the allowable growth rate. Therefore, over the long run, more and more carriers will face challenges hitting the required premium levels.

Below are three considerations of the medical cost trend which make this risk evident (see the above table for details):

In previous drafts of HB21-1232, required premium reductions were defined against nominal 2021 levels until 2025, after which premiums would be allowed to grow at the rate of inflation plus 1% annually.[vii] The current draft would set reductions against medical trend–adjusted 2021 levels through 2025 and subsequently allow premiums to grow annually at that same adjusted rate. This means that, if inflation plus 1% exceeds the ten-year average medical trend in the long run, premiums would be more restricted subject to the rules in the current version of the bill than to the original bill as introduced.

To illustrate this relationship between the actual medical trend and the bill’s allowable premium growth rates, the following 4 charts show projections from 2 different scenarios of premium growth in both the individual and small-group markets.

In this scenario, the annual growth rate of actual medical cost trends is equal to the 10-year average medical care CPI. This could be interpreted as the premium growth cap in the bill accurately predicting the annual medical trend. While this is just a hypothetical example it serves as an important comparison point to scenario 2, where medical trends grow faster than the growth caps. 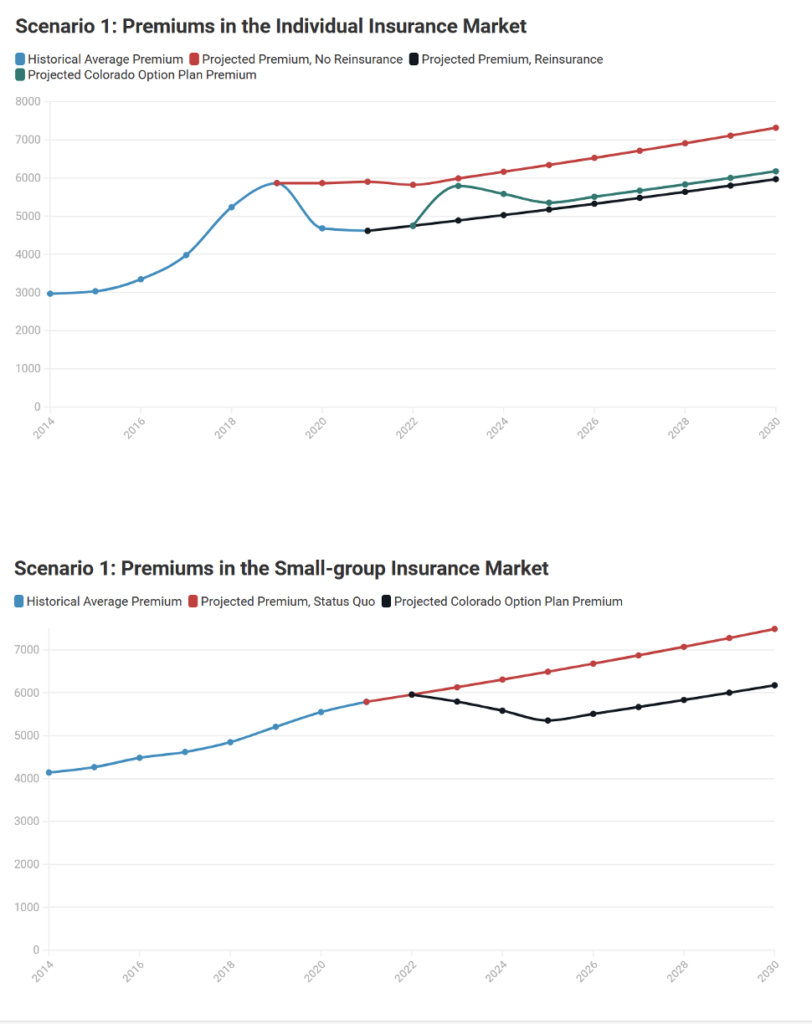 In this scenario, the annual growth rate of actual medical cost trend is higher than the 10-year average medical care CPI, as estimated by actual projections. This could be interpreted as having the premium growth cap in the bill restricting growth in annual premiums despite the growth in underlying cost pressures across the health care industry. 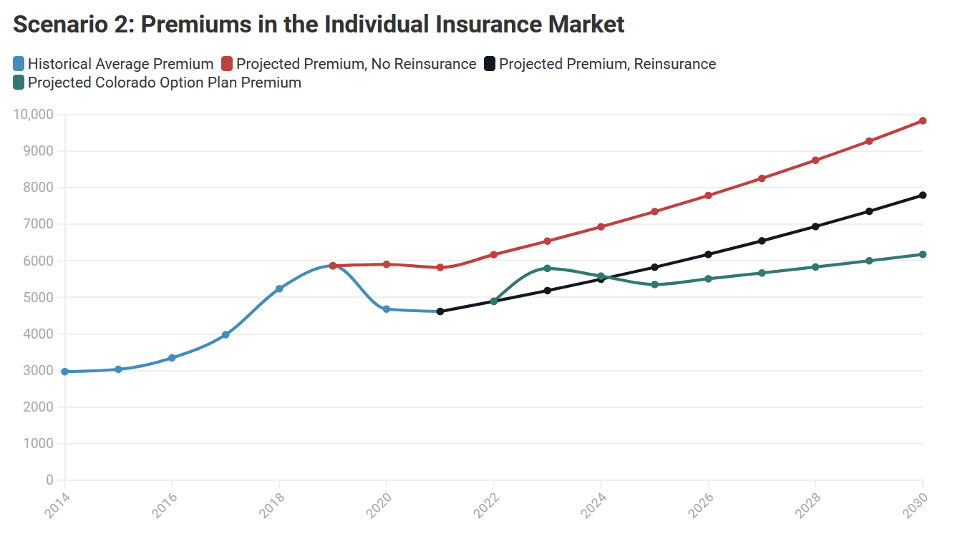 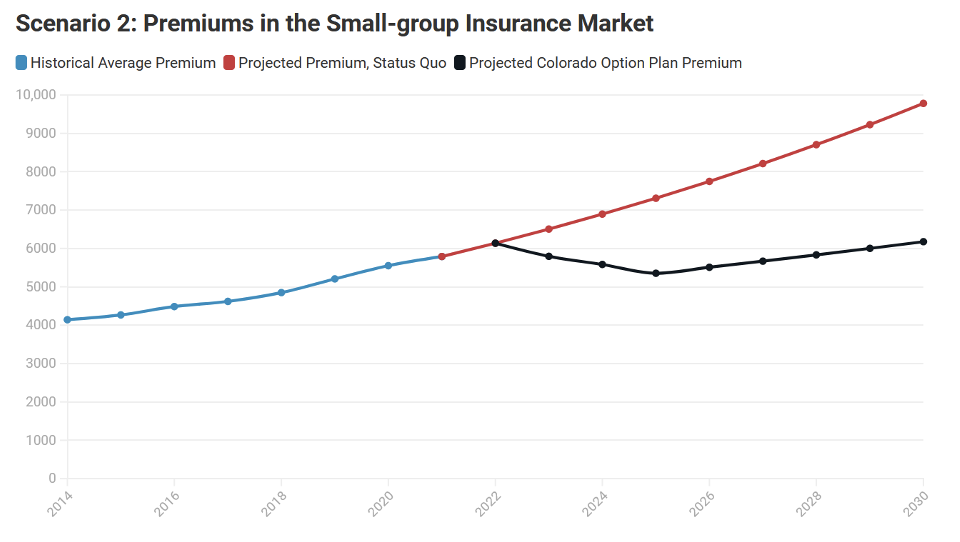 As the current allowable growth rate in premiums is well below the projected annual growth in underlying medical costs, there is a seeming inevitability that more and more carriers and Colorado option plans will trigger the ability for the state to set provider reimbursement rates.

Several of our previous reports have detailed the impacts associated with reimbursement rate setting at similar levels proposed in the latest bill. 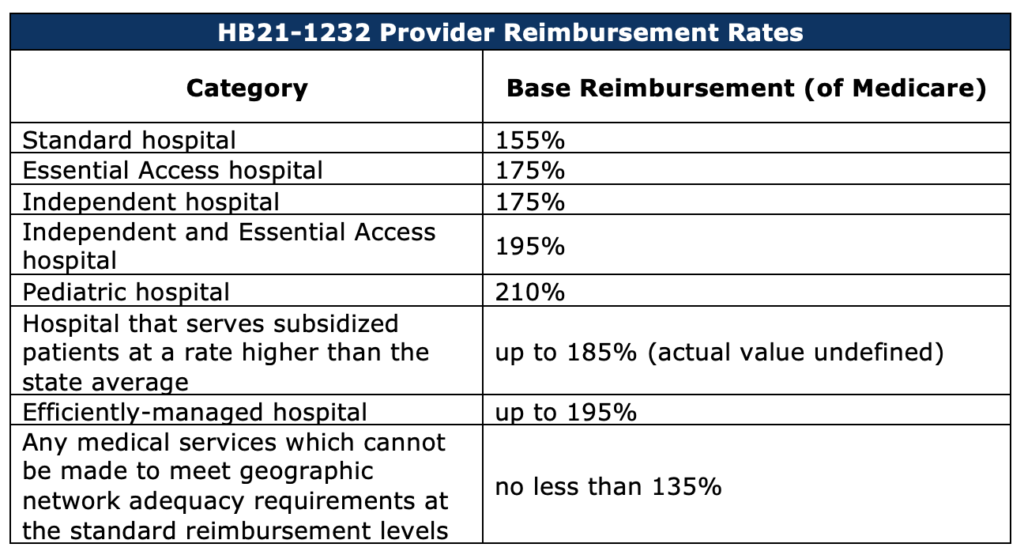 This means that Colorado hospitals, especially those which are already vulnerable, would stand to lose huge amounts of revenue as a result of this bill. According to CSI’s modeling, the 2020 state option bill, which prescribed a very similar reimbursement schedule, would have caused revenue losses between $500m and over $1b per year under a moderate enrollment scenario. Rural hospitals could be impacted worst of all.[ix] According to that same CSI study, “Rural hospitals would be disproportionately negatively impacted, and face reduction in revenue double what urban hospitals would face on a percentage basis. The modeling results of offering the Colorado option plan in both the individual and small group market…estimate a 3% reduction in revenue for urban hospitals and a 6.3% reduction for rural hospitals.”