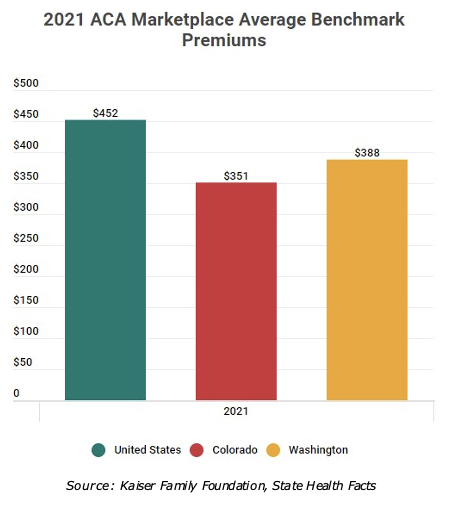 Colorado lawmakers are considering the creation of a state-controlled health care plan, commonly called “the public option.” The only state  to attempt such a policy is Washington State, which passed public option legislation in 2019. The public option was subsequently introduced during the 2021 open enrollment period late last year.

To help inform health care policy discussions at the legislature, the Common Sense Institute reviewed recent trends in Affordable Care Act (ACA) insurance premiums across Washington State and Colorado.[i] While Washington State moved ahead with a public option in an attempt to reduce premiums in the ACA marketplace, Colorado prioritized the creation of a reinsurance program. Under reinsurance, the state partially covers the highest cost medical claims in the ACA marketplace in order to put downward pressure on premiums. The reinsurance program is financed by fees on health insurance carriers and hospitals.[ii]

For the 2021 plan year, while both Colorado and Washington State have more affordable premiums than the country as a whole, average benchmark premiums in the ACA marketplace are 9.5% lower in Colorado than Washington State.

Supporters of the Washington State public option claimed the state-controlled healthcare plan would also be cheaper than other plans in the Affordable Care Act marketplace. 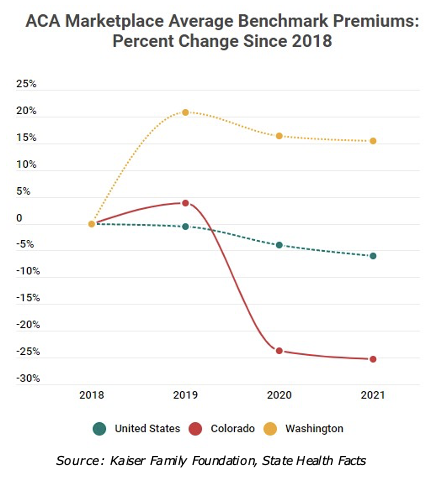 The public option has also been proposed as a means of reducing Colorado’s uninsured rate. On this point, Washington state health officials recently released data that may inform the policy debate in Colorado.[iv] Specifically:

The different outcomes experienced in Washington State and Colorado should help inform the debate over healthcare policy in Colorado. While the public option is often put forward as a strategy for lowering the cost of healthcare premiums and reducing the ranks of the uninsured, the contrast between these two states – one which has a public option and one which does not – suggest that other policy initiatives should be considered in service of those goals.