Proposes to permanently reduce the statewide property tax assessment rate for several classes of property. The ultimate impact of the measure hinges on whether 2021 legislation, passed by the state legislature after the ballot initiative was submitted, will remain law. The differing outcomes are more than $972M apart in the long run, or the difference between a potential $1.1B revenue cut to a potential $151M revenue cut in 2024.

Overview: The Gallagher Amendment and Proposition 120

Last year, Colorado voters approved Amendment B, which abolished the formula for determining property assessment rates established in 1982 by the Gallagher Amendment. This, the repeal of the Gallagher Amendment, left a void in Colorado’s property tax policy which legislators and interest groups have begun trying to fill since then—the static assessment rates enshrined by Amendment B in the absence of Gallagher’s formula were never intended to hold permanently, as the removal of its strict policy mechanism left property taxation subject to grow at the same rate of the growth in property values. This leaves taxpayers more vulnerable to sudden market disruptions like the recent spike in home prices.

This year, two major efforts to change Colorado’s property tax policy have come to prominence: Proposition 120, which aims to permanently reduce assessment rates for almost all types of property, and SB21-293, drafted and passed in response to Proposition 120, which, pending likely litigation, tempers the potential impact of the proposition and temporarily reduces some residential and commercial assessment rates.

As it was proposed and approved for circulation, Proposition 120 would, if passed, reduce assessment rates on residential property from 7.15% to 6.5% and on all other property types, besides mining and oil-and-gas drilling, from 29% to 26.4%. Now, due to the passage of SB21-293, which reclassified property types, Proposition 120’s two rate reductions would apply only to multi-family and commercial lodging property, respectively. The proposition’s ballot language was set inalterably before SB21-293’s passage, so the question which will appear on the 2021 ballot incorrectly references the original rate reductions. Whether the intentional disruption caused by SB21-293 will ultimately apply to the implementation of Proposition 120, if it is passed, is still unclear. The measure’s sponsors have stated publicly that they are poised to bring litigation against the legislature which would restore its original effects, i.e., the broad assessment rate cuts indicated in the ballot language.[i] In this report, both of Proposition 120’s possible outcomes upon passage are represented as scenarios and form the bases of the impact projections:

The tables directly below show the impacts that SB21-293 and Proposition 120 will have on assessment rates depending upon its outcome under scenario #1 or #2.

The fiscal impact of Proposition 120 is to directly reduce property tax revenue to counties and districts by reducing the total assessed value of property below baseline projections. Some counties may raise their mill levies to offset the revenue reductions caused by lower assessment rates, but neither CSI’s modeling nor the state’s fiscal impact analysis includes any adjustments to mill levies necessary to raise additionally the revenue that counties would otherwise lose. In 2024, according to CSI’s calculations, the direct revenue impact of this proposition’s passage would be either -$150 million, under scenario #1, or -$1,118 million, under scenario #2. SB21-293 would not change the direction of the revenue impacts under either scenario, but it would reduce the magnitude of the original projected impact by 86.6%. If SB21-293’s effect upon Proposition 120 is overturned, the total property tax revenue to Colorado counties will decrease from 2021 to 2022 by over $435 million; if it is not, revenue will continue to grow each year regardless of Proposition 120’s passage. The graph below shows a baseline revenue projection alongside projections of Proposition 120’s presumptive impact before and after the signing of SB21-293. 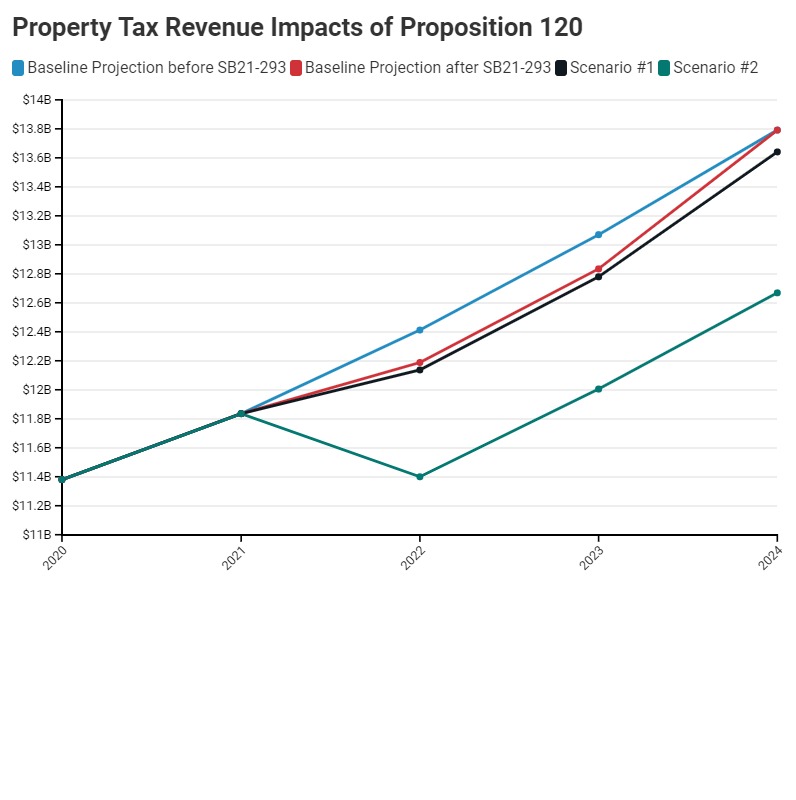 The primary difference between the impacts under the two scenarios besides magnitude, is their distributions across property classes. Whereas the measure under Scenario #1, with the effects of SB21-293, would only apply to one type of property within both the commercial and residential classes, under Scenario #2, it would apply to nearly every property type. As a result, there is a wider range of detailed potential revenue effects even than the total numbers suggest. The table below summarizes the revenue impacts to the state by property class in 2022, by scenario, compared to 2021 collections. The table details the components of the continued revenue growth of Scenario #1 and the first-year revenue cut of Scenario #2.

Colorado’s counties are, largely, not in dire financial straits at the moment—federal relief aid packages approved in the last year have sent about $2 billion to Colorado localities[ii] and another $2.5 billion to school districts and the Colorado Department of Education.[iii] Proposition 120 would impact no county severely enough to overwhelm the effects of this federal aid, but its passage would still decrease the amounts of money that counties and districts can budget for future years.

Several Colorado counties have authority to allow their property mills to increase in response to a revenue reduction. Even in counties other than the six which have floating county mills, nearly every school district, together covering 99.9% of Colorado’s population, can increase its mill levy on the basis of lowered assessment rates. Recently, HB21-1164 repealed a schedule of property tax credits issued by school districts which decreased the effective number of mills charged to property within those school districts. These are not reflected in CSI’s modeling, but will nonetheless severely temper any revenue shortfalls which Proposition 120 would cause.

Not every county would experience the effects of Proposition 120 similarly under either passage scenario. The lost property tax revenues would be distributed amongst Colorado’s counties unequally—if the effect of SB21-293 endures, counties with large shares of multi-family and lodging property will be impacted most severely by the assessment rate reductions. Densely populated urban counties, like Denver, Boulder, and Broomfield, and counties which rely heavily upon tourism, like Pitkin and Eagle, would experience the greatest revenue reductions per capita; agricultural and manufacturing counties would, likewise, be least impacted. If the measure passes and the sponsors’ lawsuit succeeds, conversely, the counties most impacted will be those with large agricultural and manufacturing sectors. The table below displays these revenue impacts in detail with respect to both outcomes; scenario #1 represents the proposition’s impacts under current law and scenario #2’s values correspond to the impacts of Proposition 120 as written. 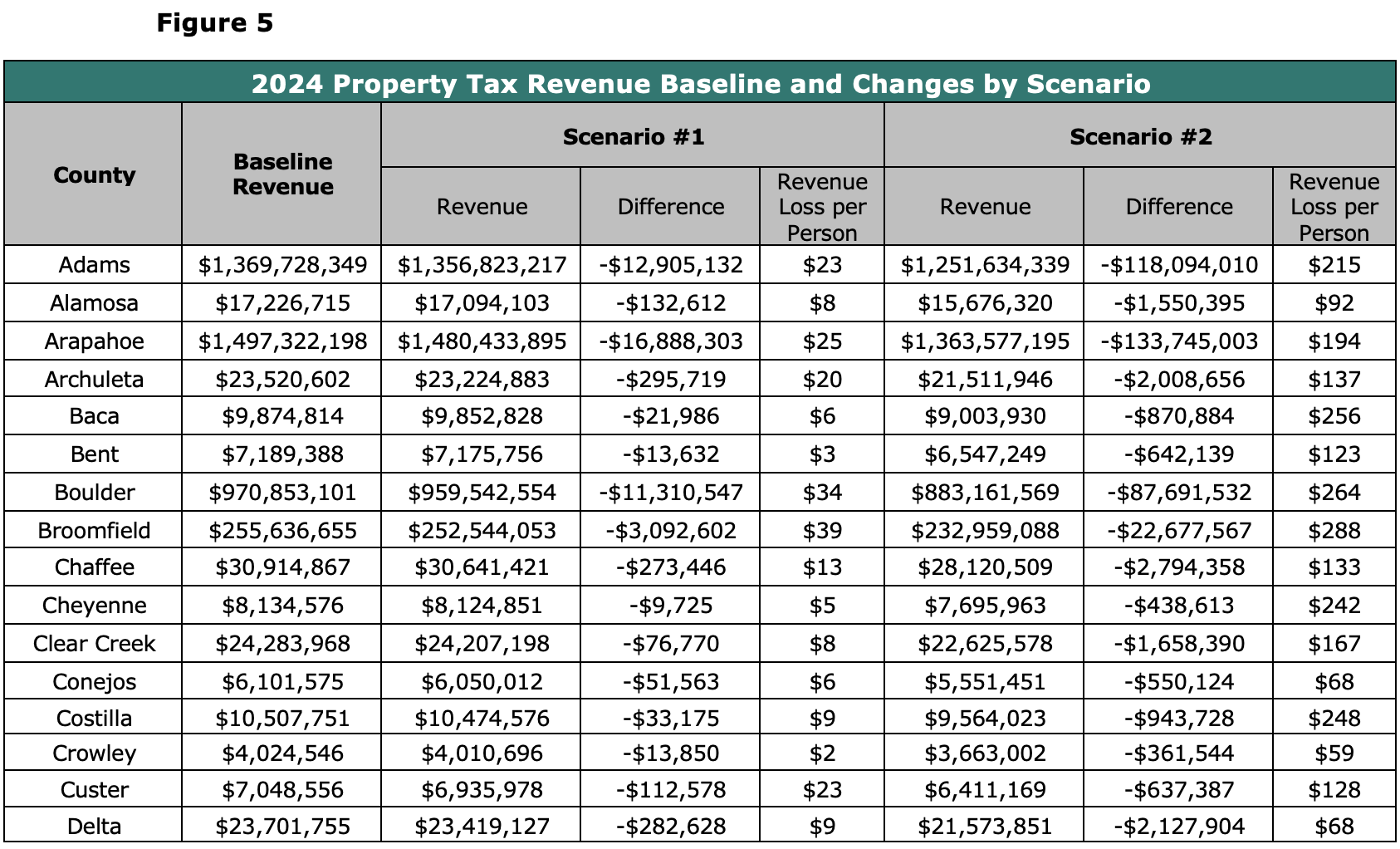 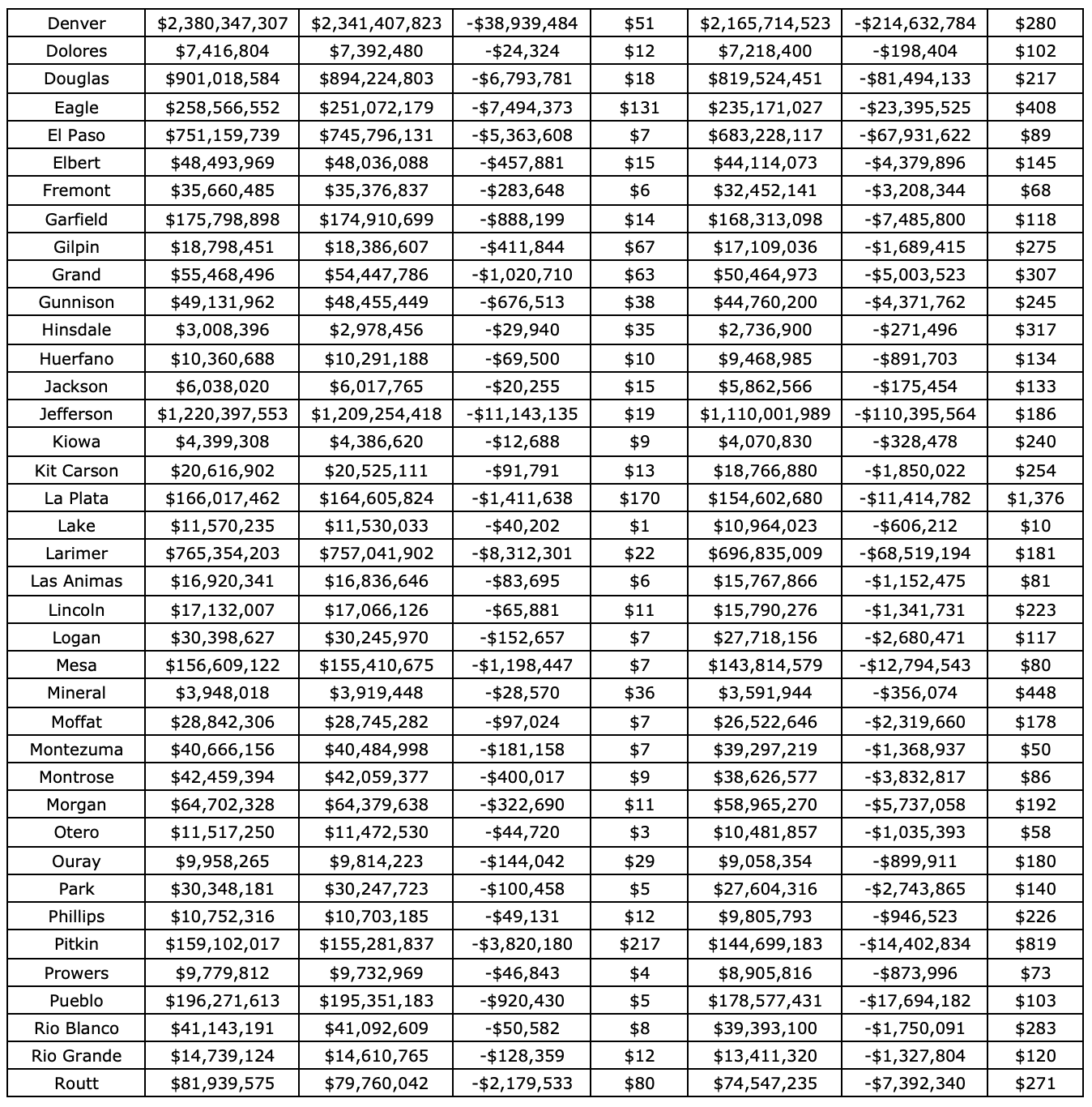 The property tax revenue projections presented in this report are based upon the assessed values of property by class and county published in the Colorado Division of Local Affairs’ 2020 property tax annual report. These values, converted into actual property values by dividing them by the 2020 assessment rates, form the year-0 baseline and are grown to project future years’ property values by national inflation projections, county population growth projections, and outlier-excluding averages of the prior 10 years’ growth rates. These projections of total property values are multiplied by the relevant assessment rates, multiplied by their corresponding counties’ average mill rates, and summarized at the state and county levels for each projection year. The projections, consistent with pre-2021 law and revenue trajectories, used in this report only for comparative purposes, were developed from the contemporary projections by adjusting mill levy parameters according to the magnitude of each year’s static revenue decrease.