Under the Colorado Constitution, the creation of new taxes or the raising of existing taxes must be voted on by the people of Colorado.[i] Proposition 117 proposes a similar voter approval process for new state fees. If Proposition 117 passes, every new fee or enterprise “with projected or actual revenue from fees and surcharges of over $100,000,000 total in its first five fiscal years must be approved at a statewide general election.”[ii]

Total state spending in Colorado comes from three main revenue sources: state taxes, state fees, and federal funding. Most fees and all federal revenues are exempt from the TABOR provisions of the Colorado Constitution. This has allowed them to increase outside our state’s constitutional limits on spending.[iii] From 2001 to 2018, total fee-based revenue grew from $1.1b to $17.9b. Higher education fees, such as tuition, grew from $657m to $12.9b.

How Much Does the Growth in Fees Equate to in Income Taxes?

The following chart shows how much the personal income tax rate would have to increase, to raise enough revenue to eliminate all fees, or all non−higher education−related fees.

Under the Colorado Constitution, the creation of new taxes or the raising of existing taxes must be voted on by the people of Colorado.i This November, Colorado voters could see Proposition 117 on the ballot, which proposes a similar voter approval for new state fees. If Proposition 117 passes, every new fee or enterprise “with projected or actual revenue from fees and surcharges of over $100,000,000 total in its first five fiscal years must be approved at a statewide general election.”ii

Most fees and all federal revenues are exempt from the TABOR provisions of the Colorado Constitution, however, which has allowed them to grow outside our state’s constitutional limits on spending.iii In 1993, the first year of TABOR limits, only 46% of the total state spending was exempt, or $2,403 per Coloradan in 2019 inflation adjusted dollars. In 2019, 69% of total Colorado state spending was exempt from TABOR, which equates to an amount of $5,787 per Coloradan.

What is the difference between a fee and a tax?

For many, the distinction remains unsettled, however, generally, taxes are revenues collected by the government which can be used for any purpose the legislature chooses. Fees are revenues that are collected for a specific purpose and often for the funding of quasi-government entities referred to as enterprises.

Since the adoption of TABOR, or the Taxpayer’s Bill of Rights, voters have approved only a total of 3 statewide tax revenue increases, which include increased rates on tobacco products, new taxes on marijuana, and online sports betting. However, during that same time, the state legislature has created 15 new enterprises, resulting in fees to Coloradans and new revenue to the state, without a direct vote of the people. In FY 2018, total revenue collected from enterprise fees totaled $17.9 billion. 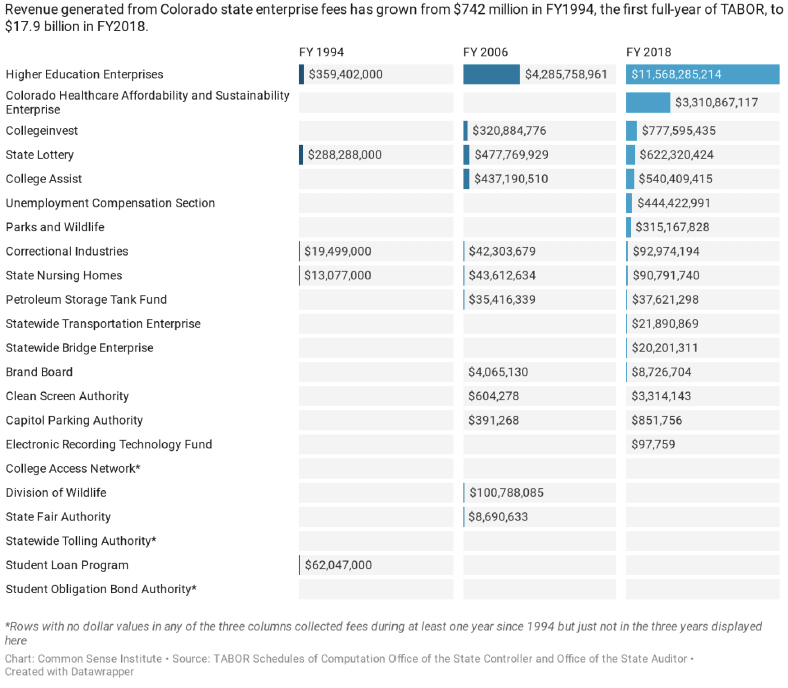 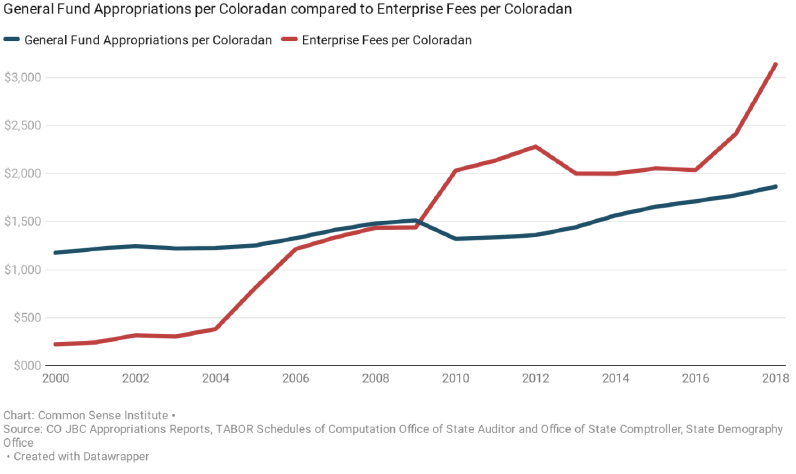 The reasons for this trend are two-fold: First, individual fees have grown, and second, the Colorado General Assembly has moved several revenue sources outside of the TABOR cap by designating them as state enterprises. The primary example is the exemption of most higher education tuition and fees in 2005. Yet even when enterprises related to higher education are removed, total remaining fees have grown from $97 per Coloradan in 2000 to $873 per Coloradan in 2018.

If passed, Proposition 117 would not change any of the enterprise fees that currently exist, it would instead involve the voters in the process of approving new fees, which are being used more and more by lawmakers and interest groups to support their public policy priorities.

For example, during the 2020 state legislative session, a bill was passed to create a new enterprise estimated to collect nearly $130 million in new fees from health insurance companies and hospitals. A group of lawmakers also endorsed a proposed ballot measure for the November 2020 election, Proposition 117, which would raise fees by an estimated $1.3 billion to establish a new paid family and medical leave enterprise. The fiscal note accompanying Proposition 117 estimates that $1.3 billion in new fee-based revenue will be needed to cover the paid leave benefit program.iv

Taken together, the creation of these two new enterprises would result in an 8% increase in enterprise fee-based revenue, or an additional $248 per Coloradan per year.