On the Road to $1 Billion in Vehicles Stolen: The Data Trends Behind Colorado’s Motor Vehicle Theft Crisis

Despite the complexity of the issues surrounding motor vehicle theft, there is a crystal-clear trend in the Centennial state. Theft rates continue to rise, and Colorado maintains its unenviable distinction as the number one state in America for car theft. Common Sense Institute (CSI) Criminal Justice Fellows Mitch Morrissey and George Brauchler explore the data and trends through the first six months of 2022.

In their 2020 report on motor vehicle theft, the Colorado Auto Theft Prevention Authority stated that, “…motor vehicle suspects operated with virtual impunity”.[i]  Based on the findings in this report, it appears that Colorado has failed to implement effective policies to change that reality.

The cost of crime

Where cars are stolen

Arrests are not keeping pace with theft

What is being stolen

In 2021, the top ten vehicle makes and models stolen in Colorado (per the Colorado Auto Theft Prevention Authority) are: [i]

Colorado Continues to have the Highest Motor Vehicle Theft Rate in the U.S.

According to the National Insurance Crime Bureau, Colorado led every state in America in its motor vehicle theft rate and was in the unenviable position of having the highest rate in the nation[ii]. Based on the increase through the first half of 2022, it appears likely that Colorado will retain the number one spot for car thefts again this year, see table 1.

The number of motor vehicles stolen and recovered since 2008, is shown in Figure 1 below. After 2010, the number of thefts increased. Increases continued from 2015 through 2019, the period immediately after the 2014 statutory reductions to motor vehicle theft penalties passed.

In 2020, the number of thefts skyrocketed. According to the Auto Theft Intelligence Coordination Center’s (ATICC) 2020 Special Report – Contributing Factors Behind the Rise in Colorado Motor Vehicle Thefts, “the 2020 spike in vehicle thefts in Colorado coincided with policy changes at the state level, which were designed to mitigate the impact of the COVID-19 pandemic. These changes encompassed not only crime reporting protocols, but the manner in which law enforcement agencies and the courts prioritized auto theft crimes and processed offenders.[iv][v]

In comparing a measure of wealth distribution—the ratio of high to low income to poverty rate—to motor vehicle theft rates, there is a marked tendency for higher theft rates to occur where the ratio is lowest (Adams, Pueblo, and Denver counties). The lowest theft rates tend to occur where the ratio is higher (Douglas, Larimer, and Boulder counties). Less wealthy areas are more susceptible to motor vehicle theft. Presumably, lower income households are impacted more. 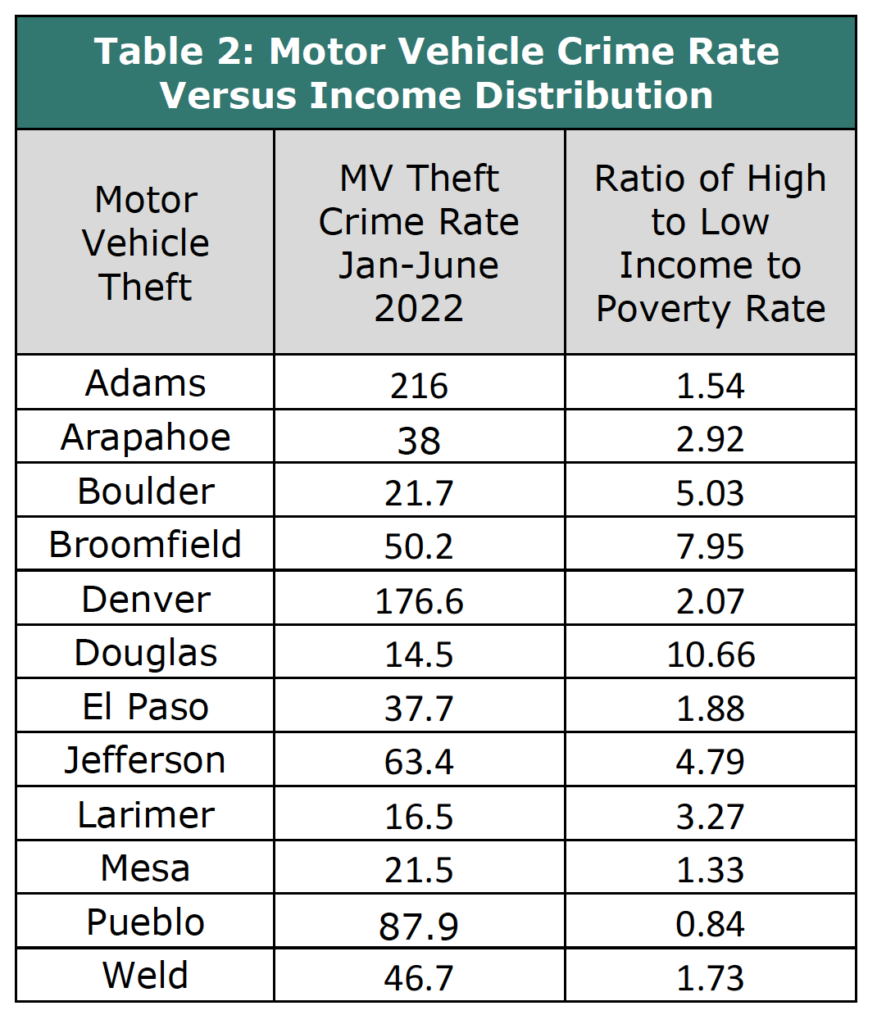 The FBI reports the number of crimes for U.S. cities that submit data. The latest quarterly report is 2022-Q1. CSI converted the number of vehicle thefts into vehicle theft rates based on population for each reporting city. Table 3 shows how 12 Colorado cities rank in comparison to the 185 total cities that reported crime data. Cities ranked in the top ten are highlighted in yellow. Denver ranks number 2 in motor vehicle thefts, down from 1st in 2021. Denver (2), Aurora (3), Pueblo (9), and Westminster (8) held four of the top ten spots nationwide for vehicle theft in 2022-Q1.

Table 4 below, show the top ten ranked cities for motor vehicle theft in the U.S. Washington has three cities in the top ten and Oregon has two. 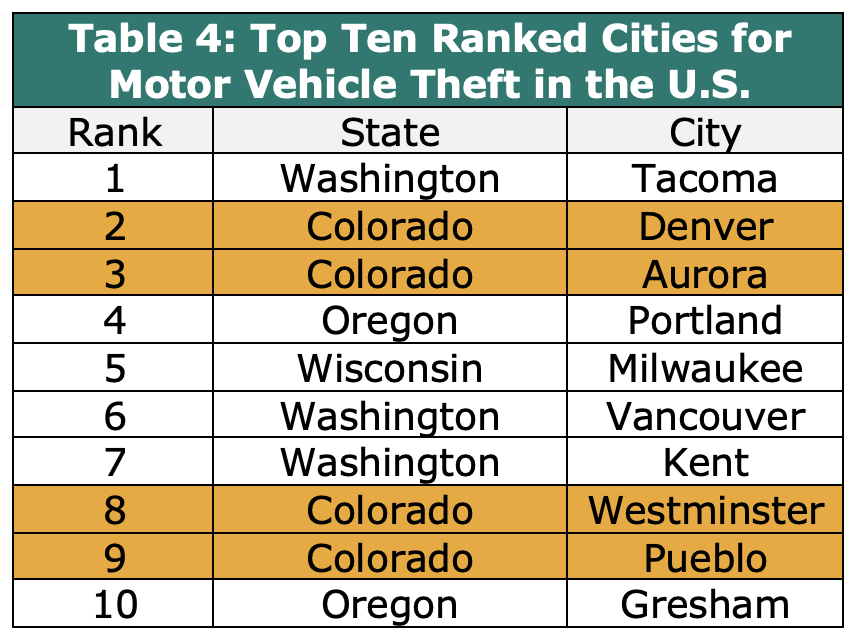 To combat the rise in motor vehicle thefts, on July 11, 2022, the City of Aurora, passed new mandatory jail time minimums for people convicted of stealing cars[vii]. First time offenders face a mandatory minimum 60-day jail sentence. For “repeat offenders,” the mandatory minimum jail sentence is 120 days in jail. This only applies to misdemeanor charges, not felony crimes that have aggravating factors such as the use of a weapon or assault. A person charged with motor vehicle theft who fails to appear in court, faces a mandatory 10 days in jail. Fines paid by defendants will be used to pay victims to retrieve their cars from impound lots. The ordinance changes also include tougher penalties for stealing essential vehicle parts, including, the engine, transmission, front fender, hood, any door, front or rear bumper, rear quarter panel, deck lid, tailgate, hatchback, trunk floor pan, cargo box of a pickup, frame or supporting structure(s), cab of a truck, body of passenger vehicle, airbag or airbag assembly, wheel or tire, catalytic converters, or any other part of a motor vehicle that is comparable in design or function to any of the parts that have been listed, or that have been labeled with a unique traceable identification number, by the manufacturer of the motor vehicle part. The perpetrator shall be fined a sum not more than $2,650 or imprisoned for up to 364 days, or both such fine and imprisonment. Each day an offense continues shall constitute a separate offense. 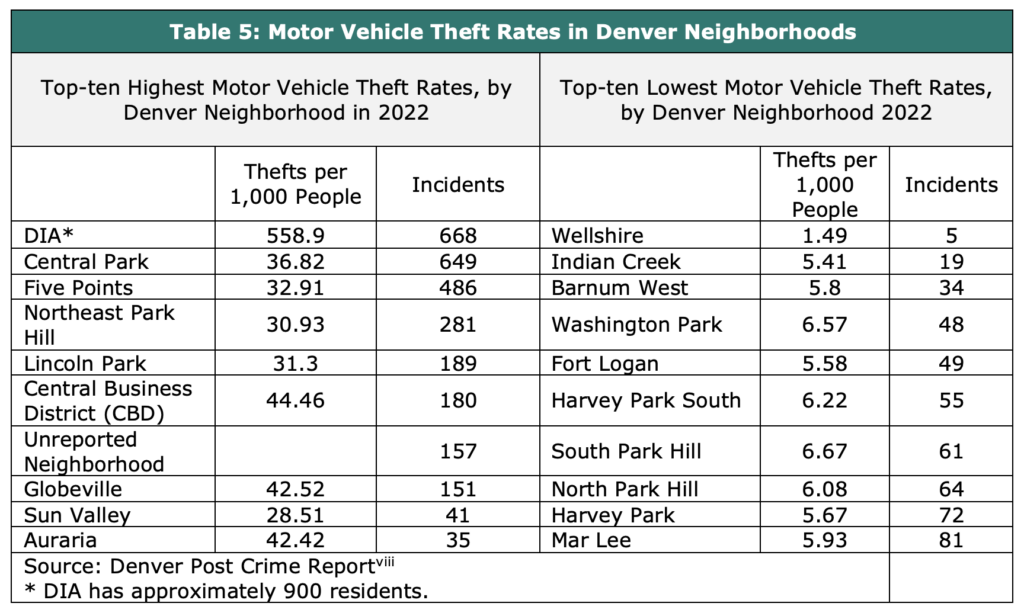 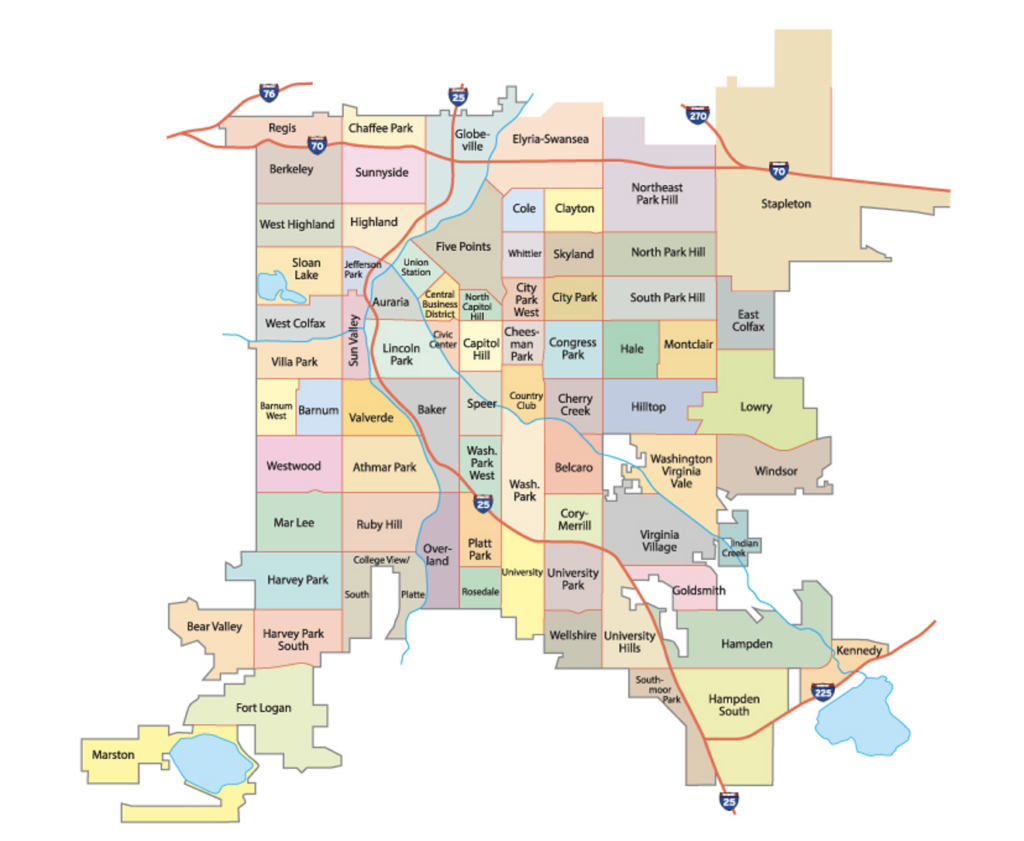 Thieves target less expensive motor vehicles. 85.6% of all stolen motor vehicles in Colorado are valued at $24,999 or less. Figure 5 shows the percentage of motor vehicle thefts by value. The largest share of stolen vehicles is valued between $15,000 and $24,999, followed closely by vehicles valued between $5,000 and $9,999. The distribution of stolen vehicles by value is likely due to lower valued cars having less sophisticated crime prevention equipment and the fact that vehicles lose their value very quickly, the demand for parts from older vehicles is greater because they have a higher occurrence of malfunction requiring replacement parts, and perhaps most notably, penalties for motor vehicle theft are less severe for lower value vehicles.[ix]

Owners of stolen vehicles that are not recovered, and have comprehensive insurance on their vehicles, can be reimbursed by their insurance companies for the full cash value of the vehicle less the deductible. Often the full cash value insurance reimbursement does not fully cover the cost of replacing the stolen vehicle unless the insured has full replacement cost auto insurance.[x] After filing a vehicle theft insurance claim, most insurance companies will review the police report to determine where the vehicle was stolen. If the vehicle was stolen in a high-risk zone and the zone happens to be where the insured resides or works, the insured can expect an increase in their vehicle insurance premium moving forward.  According to the American Academy of Actuaries, the basic causes of loss (expense) in the insurance system that impact premium levels are auto accidents resulting in personal injury, auto accidents resulting in property damage, weather-related claims (flood or hail), and theft of vehicles or vehicle components.[xi]

Colorado, with the highest rate of motor vehicle theft in the nation, is considered to be a ‘Hot-Spot ’ by insurance companies. According to the National Insurance Crime Bureau’s 2020 Hot-Spot report, the Denver, CO Metropolitan Statistical Area (MSA) (Denver-Aurora-Lakewood) was the third ranked Hot-Spot, and the Pueblo MSA was ranked 7th.[xii] Accordingly, insurance companies will adjust premiums upwards for all consumers in these zones, regardless of whether they have had a vehicle stolen.

Motor vehicle thefts are frequently related to secondary or follow-on offenses. Table 6 shows the percentage of types of secondary offenses over time. “All property crimes” is the largest category, while the share of drug crimes has nearly doubled since 2008.

As shown in figure 6, secondary offenses have been rising along with motor vehicle thefts. 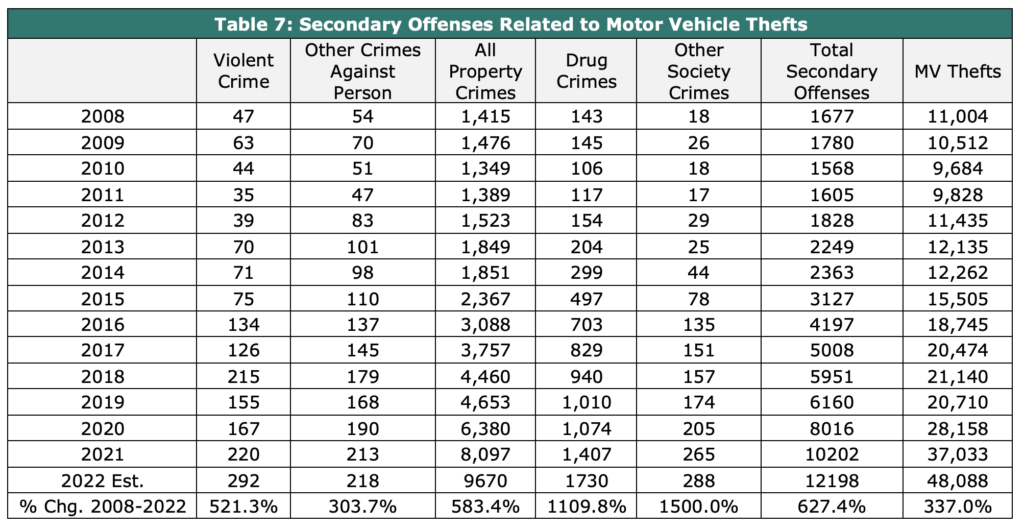 The value of the vehicle stolen determines the severity of the potential penalty assessed to the offender. The value of most vehicle thefts is between $1,000 and $19,999. In table 8, the number and percentages of aggravated motor vehicle theft cases that fit within the first and second-degree category are presented. Because there are many vehicles for which the value is not recorded, the totals shown are less than the number of vehicles stolen. 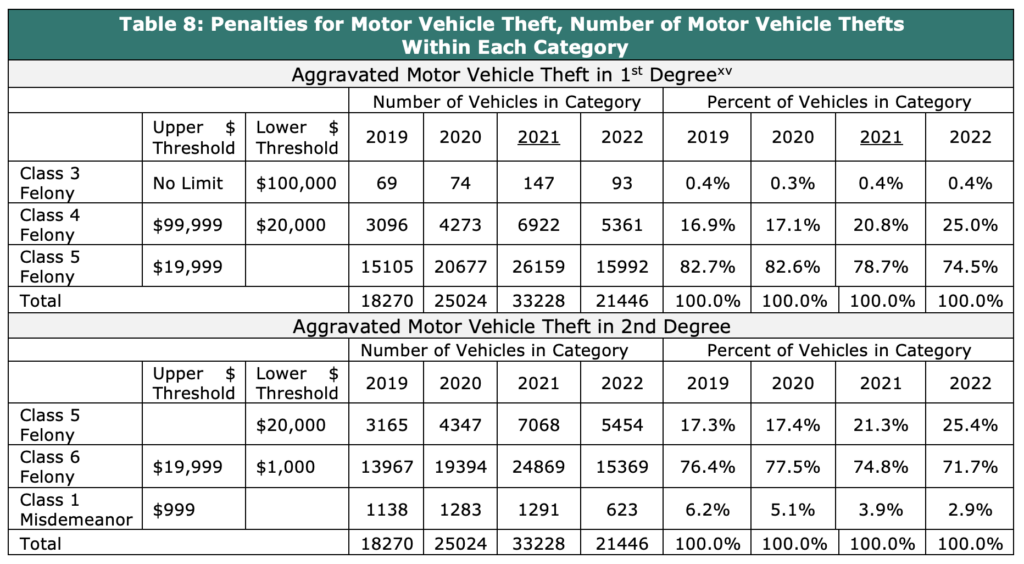 The age distribution of motor vehicle theft offenders is shown in figure 8. The largest share, 42.5% of offenders are between 25 and 34 years old. Offenders under the age of 18 account for 4.4 percent of total offenders.

Motor vehicle theft is treated as a “low level” crime by Colorado’s criminal justice system. Unless there are significant changes in the way the car theft epidemic is tackled, the quality and safety of Colorado will continue to decline. Property is a fundamental right on par with life and liberty — one which needs to be valued by  state and local leaders through laws and policies designed to protect it. Colorado must focus on the reality that property crimes—including motor vehicle thefts—are not victimless crimes. In every instance of motor vehicle theft, an individual or family suffers serious economic harm, and sometimes physical injuries. The stolen vehicle was an asset to the owner for work, education, family, and the requirements of daily life. Insurance rarely covers the full cost of replacement. For the thief, a stolen vehicle can become a means to commit other crimes.

Colorado’s car theft data shows an undeniable and alarming trend in our community. Denver is at the national forefront of motor vehicle theft and Coloradans who can least afford it are forced to endure great economic hardship, emotional distress, and time-consuming inconvenience. The cost of motor vehicle theft is born by all Coloradans through increased insurance premiums, even if they have not had a vehicle stolen. By immediately prioritizing property crime and penalizing it commensurate with its impact on victims, and the community, policymakers have an opportunity to undercut the success of criminals and greatly reduce this entry-level crime.

(1) As used in this section, unless the context otherwise requires:

(a) “Motor vehicle” means all vehicles of whatever description propelled by any power other than muscular, except vehicles running on rails.

(a) Retains possession or control of the motor vehicle for more than twenty-four hours; or

(b) Attempts to alter or disguise or alters or disguises the appearance of the motor vehicle; or

(c) Attempts to alter or remove or alters or removes the vehicle identification number; or

(d) Uses the motor vehicle in the commission of a crime other than a traffic offense; or

(f) Causes bodily injury to another person while he or she is in the exercise of control of the motor vehicle; or

(g) Removes the motor vehicle from this state for a period of time in excess of twelve hours; or

(3) Aggravated motor vehicle theft in the first degree is a:

(a) Class 5 felony if the value of the motor vehicle or motor vehicles involved is less than twenty thousand dollars;

(b) Class 3 felony if the value of the motor vehicle or motor vehicles involved is more than one hundred thousand dollars or if the defendant has twice previously been convicted or adjudicated of charges separately brought and tried either in this state or elsewhere of an offense involving theft of a motor vehicle under the laws of this state, any other state, the United States, or any territory subject to the jurisdiction of the United States.

(a) Class 5 felony if the value of the motor vehicle or motor vehicles involved is twenty thousand dollars or more;

(c) Class 1 misdemeanor if the value of the motor vehicle or motor vehicles involved is less than one thousand dollars.

(4.5) Whenever a person is convicted of, pleads guilty or nolo contendere to, receives a deferred judgment or sentence for, or is adjudicated a juvenile delinquent for, a violation of this section, the offender’s driver’s license shall be revoked as provided in section 42-2-125, C.R.S.