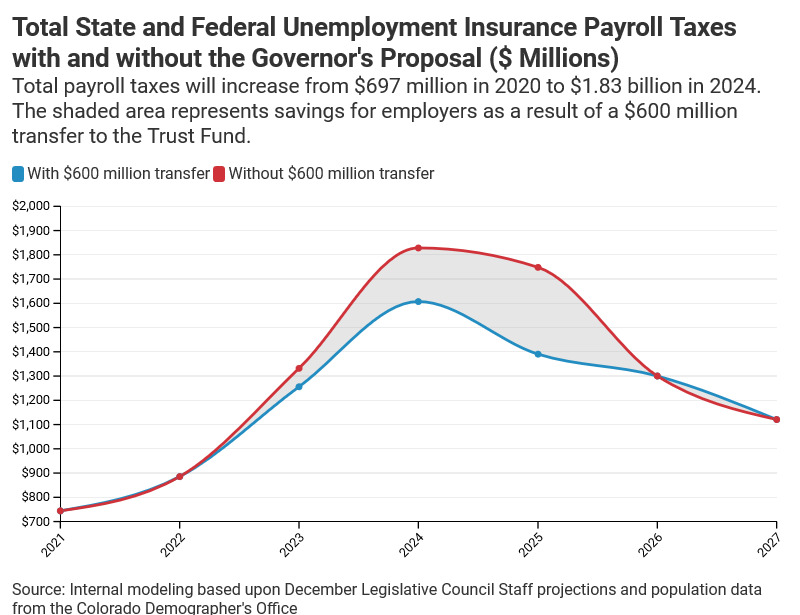 Due to the influence of the COVID-19 pandemic and the state government’s policy responses, Colorado’s unemployment levels spiked in early 2020 and caused the state’s Unemployment Insurance Trust Fund to become deeply insolvent. As of July 2021, the UI Trust Fund balance is -$1.014 billion and is not currently projected to become solvent until the 2024 fiscal year.[i] Because employers are responsible for paying payroll taxes to the Trust Fund, a depleted fund forces Colorado businesses to pay high payroll taxes on each employee and incur financial harm as a result. The graph below shows the depletion of the Trust Fund between 2019 and 2021. 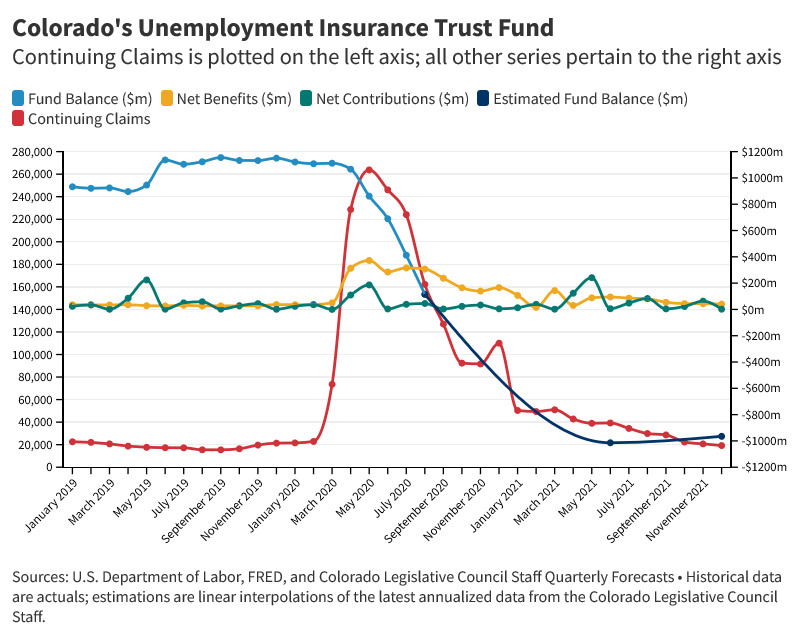 In Colorado, employers pay payroll taxes to the UI Trust Fund based upon a rate schedule defined by state law.[ii] Each employer’s base premium rate is determined by two factors: its former employees’ utilization of state unemployment insurance (a history of high utilization begets high rates), and the balance of the Trust Fund. When the fund’s balance is low, the state charges higher rates in order to refill it; when the fund is completely depleted, as it is now, the state charges high rates and additional “solvency surcharges” which are also set according to each employer’s utilization history.

The Governor’s proposal to allocate $600 million directly to the Trust Fund, therefore, would decrease the amounts employers pay in the future by bolstering the fund’s reserve, which triggers lower rates. Below is a summary of what employers are projected to pay to the Trust Fund over the next five years under current policy compared to what they would pay after a $600 million transfer.

In total, this policy would result in employer savings of almost $655 million across the state over the next three years. According to CSI’s modeling, the measure would cancel the solvency surcharge after two years rather than three and return the Trust Fund’s reserve ratio to a high and stable level earlier than under current policy. A simulation in the REMI Tax-PI economic model indicates that the state would avoid the loss of 4,700 jobs compared to the baseline projection in 2025 as a result of lowering the payroll tax increase by $358 million. If the legislature makes a larger payment to remove the federal loan sooner, as proposed in SB22-066, employers would save $438 million in 2025 and avoid the loss of 5,800 jobs. 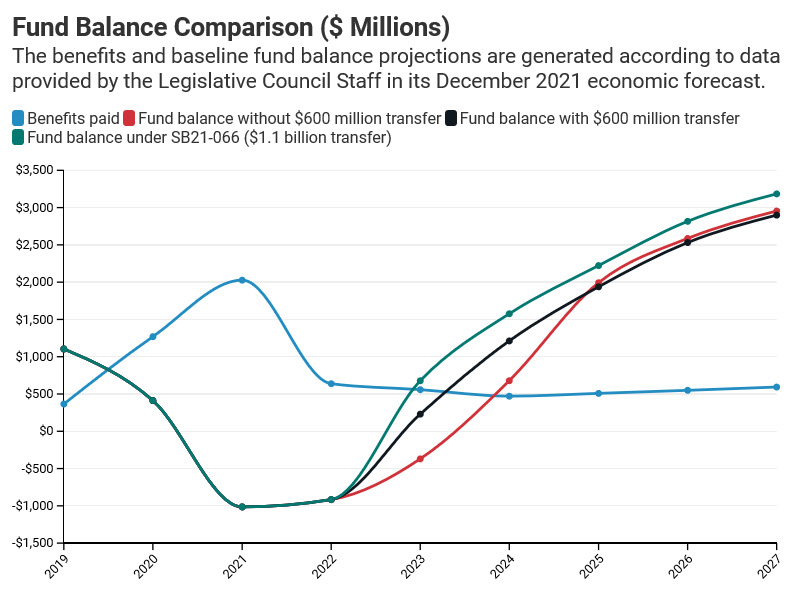 In addition to the monetary savings this would provide employers, a cash transfer to the Trust Fund would also eschew some of the risk of layoffs and closures that businesses face due to the compounding of high payroll taxes and other financial hardships associated with the COVID-19 pandemic. A small business of 10 employees who earn more than the base wage would pay between $834 and $4,455 less, depending upon its experience rating, by 2025; especially to a business struggling to retain employees, this could be a crucial cost savings.

Under the Governor’s proposal, only $297 million of the $600 million allocated to the Trust Fund would be realized as direct savings for employers by 2024. This is because, along with lowering payroll taxes, the transfer also increases the fund balance and bolsters the entire UI program against a potential short-term recession by $303 million. At the beginning of 2020, the Trust Fund’s solvency level was only 78% of what it would need to be to withstand a recession;[iii] as a result, Colorado’s unemployment insurance program has fared worse than almost any other state’s. Even once the balance of the fund returns to a level above zero, it will be insufficient to endure future disruptions over the short term. A large cash transfer, like the one the Governor has proposed, would make the fund more resilient in the short run, save employers and employees even more money, and boost the state’s economy. 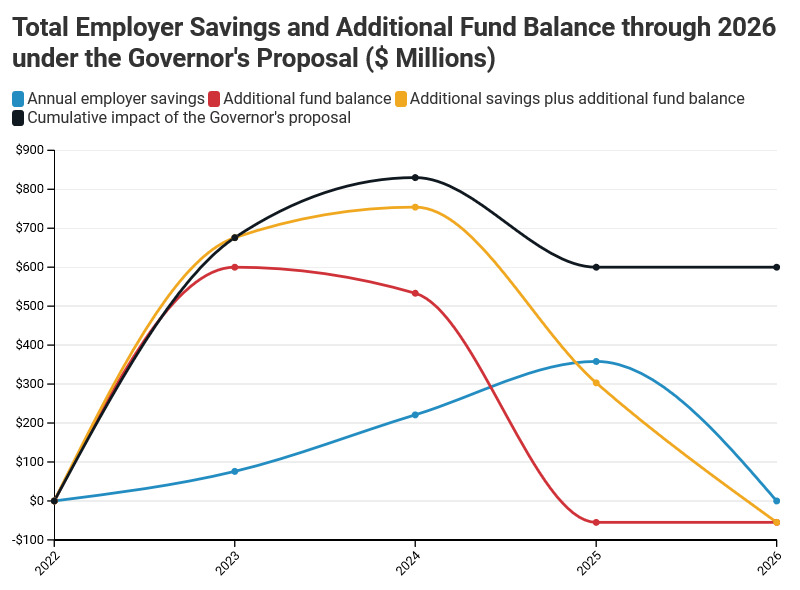 In response to the funding problems experienced during the pandemic, SB20-207 scheduled the unemployment insurance base wage to increase gradually from $13,600 to $30,600 (a 125% increase) in 2026.[iv] In years after 2026, the base wage will fluctuate according to the state’s average weekly wage; therefore, under current policy, the fund balance will continue to increase in perpetuity in a healthy economy even after the Trust Fund recovers to a high reserve ratio and the risk of fund insolvency will be faint. A high base wage is beneficial to the health of the Trust Fund but will be detrimental to the employers who pay high payroll taxes long after high rates cease to be necessary to ensure the fund’s solvency.

Despite enduring hardships similar to those faced by other states during the pandemic, Colorado is one of only nine states with an unemployment insurance program that is still in debt to the federal government.[v] Due to the depletion of the state UI Trust Fund, Colorado was forced to take federal loans, the outstanding balance of which, as of February 15th, 2022, is just over $1 billion. If the loan cannot be repaid by November 10th, 2022, it will begin accruing 2.3% annual interest which Colorado employers will have to finance through incrementally higher federal unemployment insurance premiums.

Currently, employers in Colorado pay unemployment insurance payroll taxes to the federal government worth .6% of each employee’s first $7,000 earned each year.[vi] In 2023, however, and in each additional year during which Colorado has an outstanding federal loan balance, this premium will increase by .3 percentage points ($21 per employee) and the amount raised by the increased premium will be used to repay the loan. According to CSI’s modeling based on December projections, and absent the Governor’s $600 million and the legislature’s $1.1 billion proposals, the federal loan is expected to be fully repaid by the end of 2024. 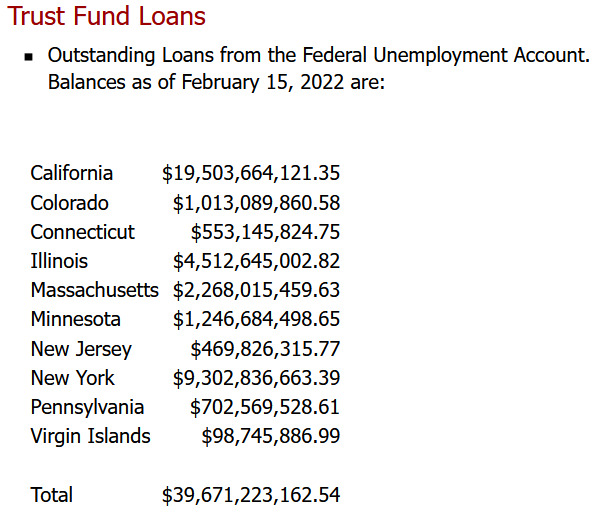 If no additional money is allocated to the Trust Fund, employers will have to pay the federal government twice as much in 2024 as they do now. They would have to pay this increase in addition to their state UI payroll taxes, which would add to the financial strain upon businesses looking to re-hire or grow after the pandemic.

Just after the start of the 2022 legislative session, SB22-066 (Restore Unemployment Insurance Fund Balance) was introduced. It proposes to contribute even more money to the Trust Fund in order to repay the federal loan entirely. If it is enacted, the Trust Fund will receive a transfer of $1.1 billion instead of the $600 million requested by the Governor. Due to the language of the bill’s first draft, there remain some unresolved concerns about the legality of the transfer and the impact it would have upon the Trust Fund’s TABOR-exempt status. CSI’s modeling assumes that legislators will find a legal way to transfer the full $1.1 billion according to the bill’s intent. The bill’s February 8th fiscal note includes an explanation of SB22-066’s potential effect upon the Trust Fund’s TABOR-exempt status and its interaction with Proposition 117. Proposition 117’s passage in 2020 requires that Coloradans vote to approve the formation of a fee enterprise if it is projected to collect more than $100 million over five years.[vii] The following chart shows the impact of the $1.1 billion payment by 2027.

Whether the Trust Fund receives the $600 million offered by the Governor’s request or the $1.1 billion from SB22-066, the federal loan will be repaid before the state’s federal unemployment credit is reduced. Under both scenarios, Colorado employers save all of the $230 million they would otherwise pay to the federal government in 2023 and 2024. Should the bill supplant the Governor’s proposal, employers will save a total of $870 million on state payroll taxes and the Trust Fund will have $230 million more in reserve after 2027. 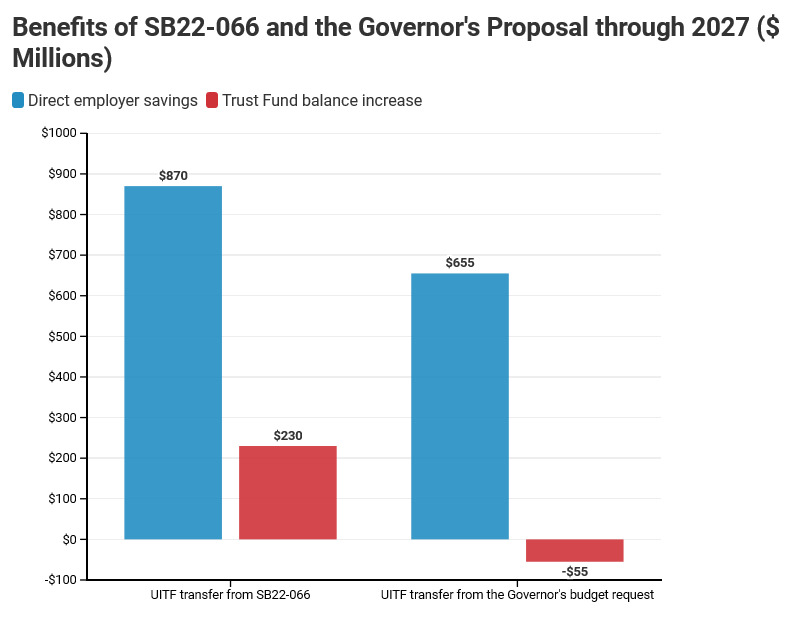 Persistently high payroll taxes to the UI Trust Fund may be more damaging to businesses now than ever before. Due to developments which transpired before, during, and after the pandemic, businesses in Colorado are under pressure from higher inflation and higher costs of doing business than ever before. Considering the magnitudes of these additional costs, keeping needless costs down for businesses is especially crucial to the state’s economic health. Below are some of the most severe burdens which businesses stand to face; for a more comprehensive list, see CSI’s July 2021 report, “The Steep Price Tag of the 2021 Legislative Session.”