Recently, the Colorado Oil and Gas Conservation Commission (COGCC), citing new authorities under Senate Bill 181 of 2019, recommended a set of new rules which would quadruple the standard residential setback distance and place additional regulations upon wells built near areas of environmental interest. Soon, the COGCC may enact these rules by internal vote and without the electorate’s approval. Currently in Colorado, developers are prohibited from establishing new oil and gas drilling operations within certain distances of residential complexes and protected areas. This effort represents the fifth attempt to dramatically increase setback distances after a failed series of proposed ballot measures in 2014, 2016, 2018 and 2020.[i]

In this analysis, the Common Sense Institute examines just one of the rule changes within the broader package of setback regulations: State-determined wildlife habitats. Under currently recommended rules 1202.c and 1202.d, soft setback distances of between 300 feet and 1.25 miles would be triggered by different habitat areas, as determined by state officials with Colorado Parks and Wildlife. In some habitat areas, the proposed rules would also limit oil and gas development to one location per square mile, unless an energy firm wins state approval for additional wildlife mitigation actions.

According to the Colorado Oil and Gas Association, the upstream and downstream value of Colorado’s oil and gas industry was worth about $19b in 2017 and contributed over $1b in state and local tax revenue.[ii] CSI’s research on the impacts of Proposition 112 showed that if that proposed setback had passed, an average of 85,000 to 110,000 jobs would have been lost over the first 10 years, along with $7b to $9b in cumulative tax revenue.

Given there is an alternative proposal offered to the COGCC to make the 1200 series setback rules hard, CSI modeling the economic impacts of this alternative proposal using the past three years of production data, i.e., 2017 to 2019. In effect, we asked the following question: If all the 1200 series habitats had been considered hard setbacks between 2017 and 2019, how would the Colorado oil and gas sector and the broader state economy have been impacted? Our findings are summarized below:

While the economic stakes are still high, the set of rules being discussed by the COGCC are different from those in Proposition 112. Committee members have promised that permitters will consider and grant individual exemptions to some of the new rules; thus, some new wells will still be permitted to drill within these “soft” setback areas, while no new drilling will be permitted within “hard” setback areas. Figure 1 summarizes the different setback rule changes and whether they are assumed to be effectively hard or soft.

CSI undertook only to model the economic and fiscal impacts of proposed setbacks within the 1200 series of rules, as the other rules have already been debated and will be enforced with unpredictable exemption rates.

Current COGCC staff recommendations are to impose hard surface setbacks surrounding the features outlined in rule 1202.c and softer setbacks around those specified by rule 1202.d. Considering recent statements from external interest groups suggesting that 1202.d’s exemption rate will be close to zero,[iii] CSI’s modeling reflects both the direct oil and gas–production and the indirect economic and fiscal impacts of rules 1202.c and 1202.d as though they will be enforced as hard setbacks. The results in this report reflect production within the Denver-Julesburg and Piceance Basins. Due to data constraints, the estimates only cover the counties of Weld, Arapahoe, and Adams in the Denver-Julesburg Basin, and Garfield, Mesa, and Rio Blanco in the Piceance Basin. They also reflect the original distance for hard setbacks of 300 feet for certain high priority fish and other aquatic species habitats. Figure 2 shows the two regions, their new well locations, and the proposed rule 1202 setback areas. 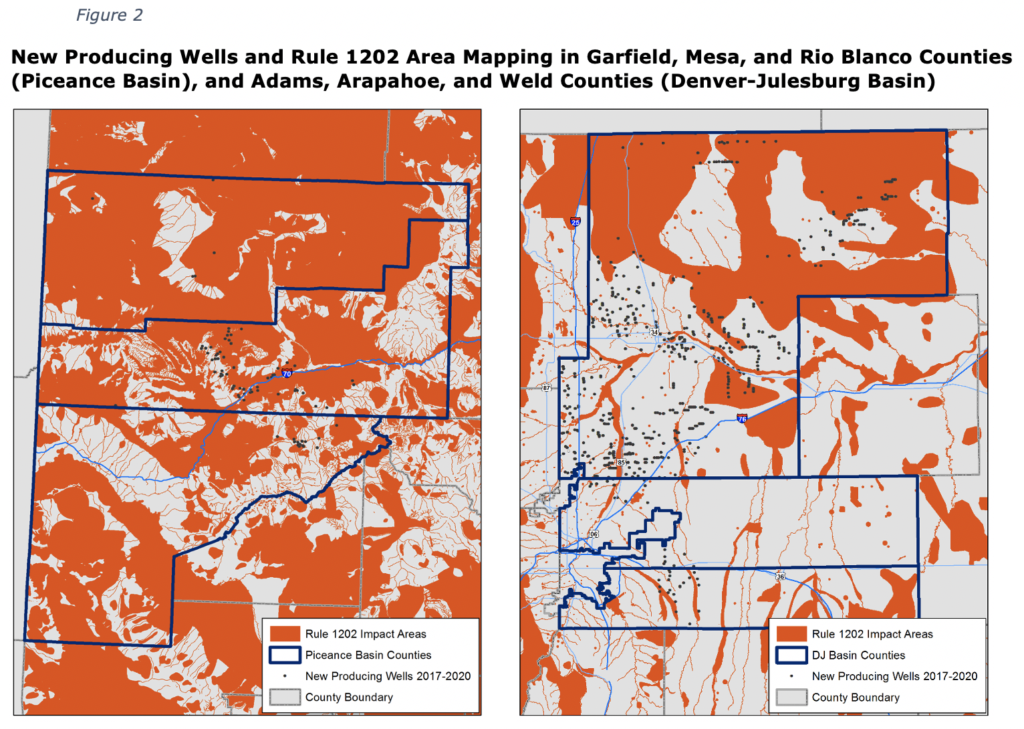 The modeling estimates that if the 1200 series setback rules had been in place as hard setbacks starting in 2017, the cumulative loss of new production it would have caused by 2019 would have been worth as much as $3b (Figures 7-9). The total volumes and estimated values of new production that occurred inside the 1200 series setbacks between 2017 and 2019 are shown below. The values were estimated using annual production volumes and the annual prices reported by the US Energy Information Administration (EIA). 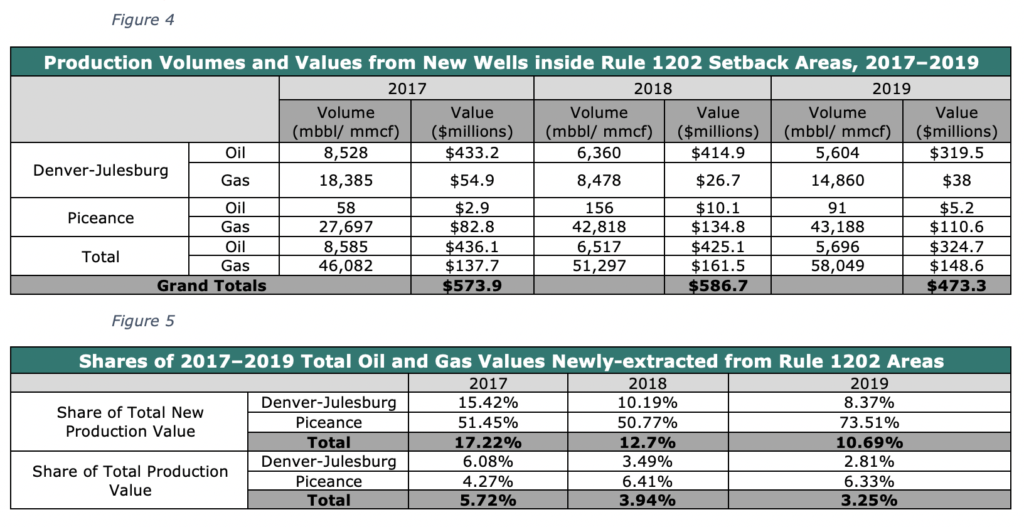 CSI used the REMI Tax-PI Colorado model to determine the dynamic economic impacts in 2019 if the 1202 setbacks rules had been in place for three years. The modeling inputs were derived from new production values since 2017 and their rates of decline since then; these are displayed in Figure 6.

It is assumed that producers will be able to access some of the resources below the new setback zone using techniques such as horizontal drilling. CSI’s two scenarios reflect the assumption that between 10% and 30% of the production in those areas would still have occurred if the rule were approved in 2017. Because of these adjustments, the value of 2019 production that would have been lost under this rule is between $1b and $1.4b. Figures 7 and 8 show these values and their constituent parts. These were used to construct CSI’s impact modeling, the results of which are summarized in Figures 9 and 10. Figure 10 shows the employment impacts to other industries outside of just the oil and gas sector. These impacts occur due to the reduction in intermediate demand for businesses that supply the oil and gas sector as well as the reduction in induced consumption from the loss of income across all sectors. 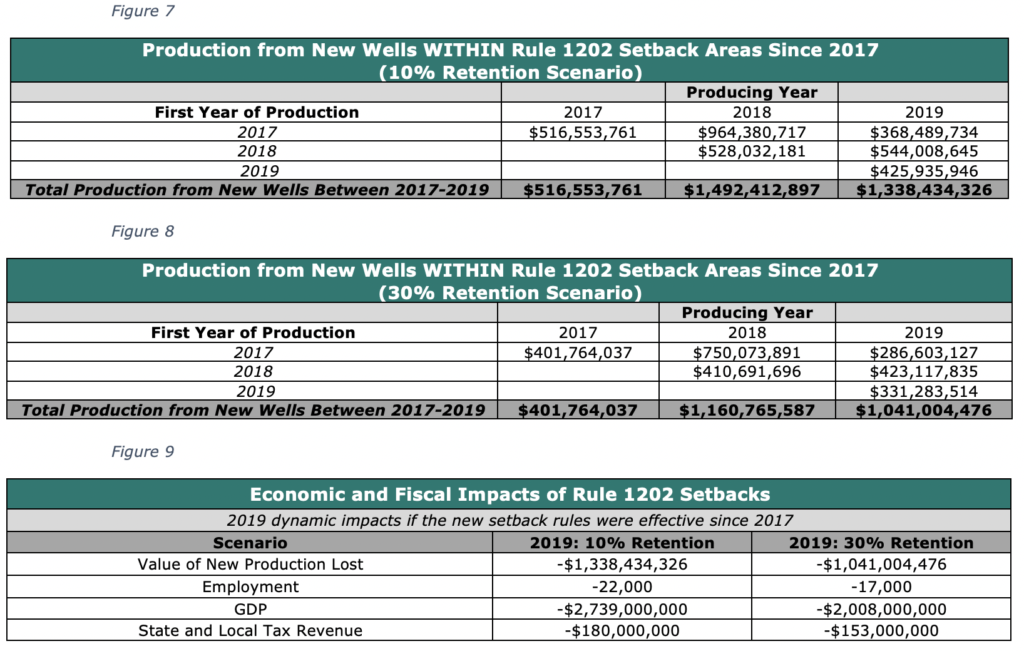 To determine the amounts of production between 2017 and 2019 that took place in the rule 1202 setback areas, Noble Energy analysts overlayed Series 1200 mapping layers published by COGCC with COGCC production data available through RS Energy’s data subscription.[iv] The map for the 1202.c high priority habitats covers the original 300-foot distance for cutthroat trout, native fish and other native aquatic species, and sportfish management waters. The revised 500-foot distance would increase the impacts modeled here. The resulting totals of production from wells situated within what would be inaccessible areas under rule 1202, were adjusted for the two scenarios to account for some degree of continued access to the natural resource below the surface setback area through horizontal drilling. The resulting estimates for the loss in new production were run in the REMI Tax PI Colorado model to generate the numbers in Figure 9. Additionally, since the Tax-PI model only calculates impacts to state tax revenues, CSI used assessment and mills data from the Colorado Department of Local Affairs and external assumptions about oil-and-gas property netbacks to estimate impacts upon local property tax collections; these estimates are shown as the “Tax Revenue” in Figure 9.

The COGCC’s proposed setbacks for wildlife habitats, under rules 1202.c and 1202.d, are just one part of a much broader overhaul of setback restrictions for Colorado’s oil and natural gas industry. However, a review of this proposal and recent historical data shows the implementation of a hard wildlife habitat setbacks alone has the potential to significantly impact both the energy sector and the broader economy.

Depending on how the wildlife habitat setbacks are implemented, total oil and natural gas production in Colorado could be curtailed over a three-year period by roughly 7% to 9%, resulting in an annual loss of $2 billion to $2.7 billion in GDP, and a $122 million in state and local tax revenue. In terms of employment, potentially 22,000 jobs could be lost across the entire economy, not just the energy sector. The effects would be felt beyond just the localities of the lost production, too. In downtown Denver, for example, 14% of the office space is leased by energy companies.[v]

At a minimum, these findings suggest that additional setbacks from state-determined wildlife habitats deserve closer scrutiny during the development and implementation of these new rules. While it can be argued that the proposed wildlife setbacks have the flexibility to allow for continued growth in oil and natural gas production, this will depend on the willingness of regulators to actually use this flexibility. The approach that regulators ultimately take will have significant implications for Colorado’s recovery from today’s highly challenging economic conditions.