Spotlight on Colorado’s Recovery: The Economic Impact of Immigration

Dr. Brenda Bautsch Dickhoner is the Common Sense Institute Mike A. Leprino Free Enterprise Fellow. Brenda has spent over a decade working in education policy at the national and state level. For CSI, she has authored research on education finance, charter schools and COVID-19 learning loss. Previously, at the Colorado Department of Education, she developed and implemented policies to ensure all students have access to a high-quality education. Brenda earned a Ph.D. in Public Policy at the University of Colorado Denver School of Public Affairs and studied political science as an undergraduate at Duke University.

Common Sense Institute is a non-partisan research organization dedicated to the protection and promotion of Colorado’s economy. CSI is at the forefront of important discussions concerning the future of free enterprise in Colorado and aims to have an impact on the issues that matter most to Coloradans. CSI’s mission is to examine the fiscal impacts of policies, initiatives, and proposed laws so that Coloradans are educated and informed on issues impacting their lives. CSI employs rigorous research techniques and dynamic modeling to evaluate the potential impact of these measures on the Colorado economy and individual opportunity. Common Sense Institute was founded in 2010 originally as Common Sense Policy Roundtable. CSI’s founders were a concerned group of business and community leaders who observed that divisive partisanship was overwhelming policymaking and believed that sound economic analysis could help Coloradans make fact-based and common sense decisions.

About the Colorado Business Roundtable

The Colorado Business Roundtable (COBRT) is a public policy organization comprised of executives from some of the state’s largest employers working to strengthen Colorado’s economic vitality. COBRT engages with elected leaders, business and nonprofit leaders, and other strategic allies to improve the business climate in our state by unapologetically amplifying the voice of business in all four corners of Colorado.

In addition, immigrants bolster economic growth through their tax contributions, spending on goods and services, and participation in the housing market.[v] In 2019, Colorado immigrants paid $5.8 billion in local, state and federal taxes.[vi] After paying taxes, immigrant households in Colorado retained over $15.6 billion in income in 2019, equating to significant spending power. Further, nearly 130,000 immigrants in Colorado are homeowners, contributing to over $56 billion in housing wealth.[vii]

In 2019, Colorado was home to 537,334 immigrants, who comprised 9.3% of the state’s population.[ix] Immigrants make up a disproportionately larger share of the workforce because they are more likely to be of working age. About 83 percent of non-native born workers are between ages 16 and 64, compared to 64 percent of the US-born population in Colorado.[x] These immigrants positively impact the state’s economy through their tax contributions and spending. Figure 1 displays data on income, taxes and spending power for immigrants in Colorado. 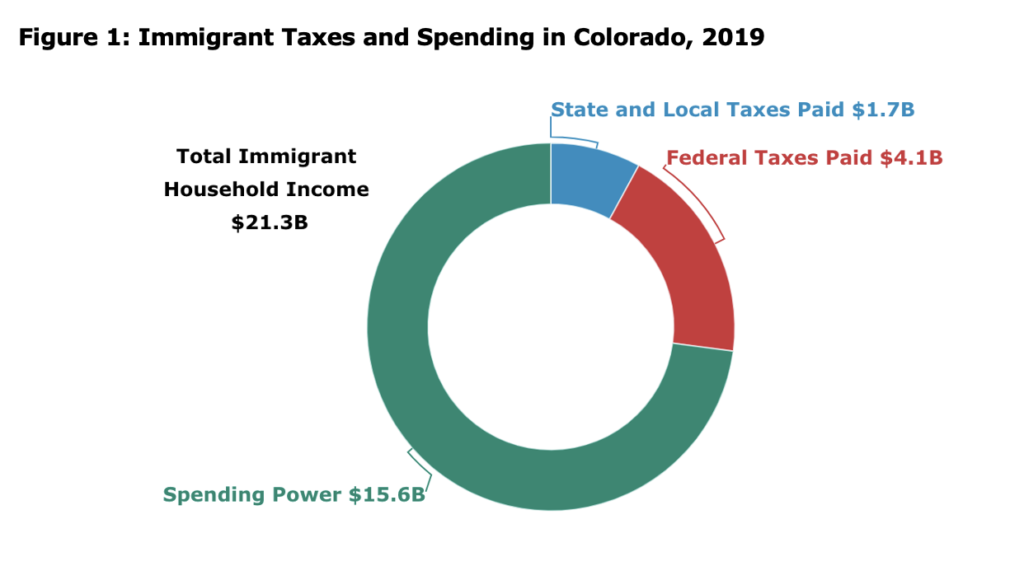 America is built on the entrepreneurial spirit of immigrants. To this day, immigrants continue to spur new innovations and technologies and take industries into new directions. Immigrant-led innovations increase capital productivity and benefit U.S.-born workers through growth in jobs and wages.[xi] Immigrants start new businesses at twice the rate of U.S.-born individuals.[xii] According to data compiled by the New American Economy, “in 2016, 40.2 percent of Fortune 500 firms had at least one founder who either immigrated to the United States or was the child of immigrants.”[xiii] These immigrant-founded companies employ millions of Americans and contribute billions of dollars to the U.S. GDP.

In addition to comprising a high share of the country’s entrepreneurs, immigrants also make up a disproportionately high share of many essential jobs.

In Colorado, while immigrants make up 9.3 percent of the state’s population, they comprise 15.8 percent of health aids.[xv] These key health care positions have become more critical during the COVID-19 pandemic, and immigrants are serving alongside native-born health care workers putting themselves at high risk of exposure in caring for others. Immigrants are also disproportionately more likely to be filling other essential jobs such as janitors and cleaners, childcare workers, food preparation workers, cooks, and taxi and truck drivers.[xvi]

Supporting all working adults, including immigrants, in returning to the labor force will be a critical part of overall economic recovery. 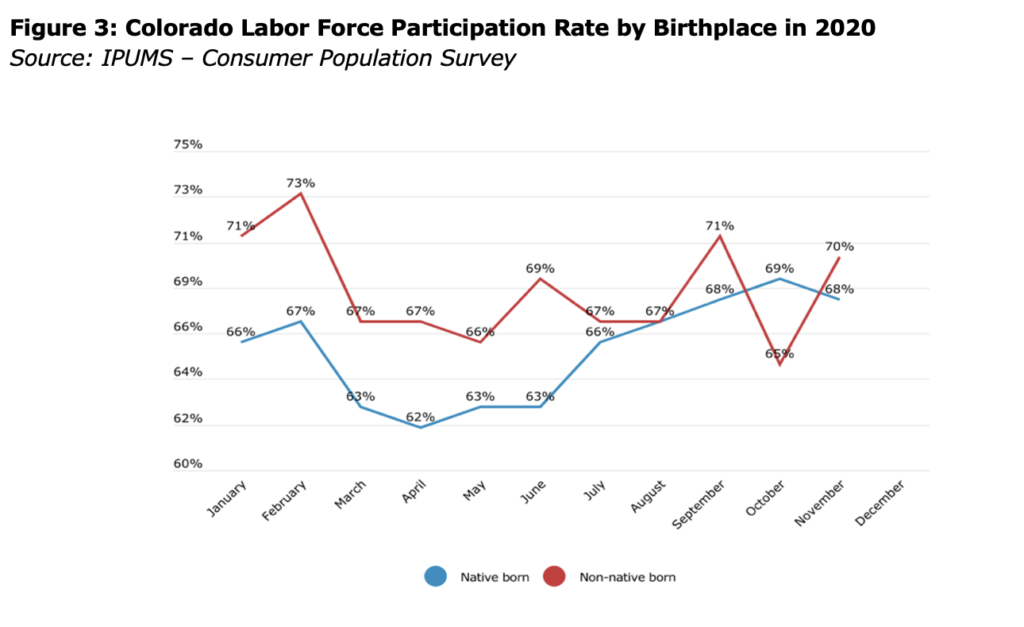 The 13 counties listed in Figure 4 each have more than 5,000 immigrant residents, and combined they are home to 91 percent of all immigrants in the state. Nearly 30,000 of the immigrants living in these 13 counties are entrepreneurs. 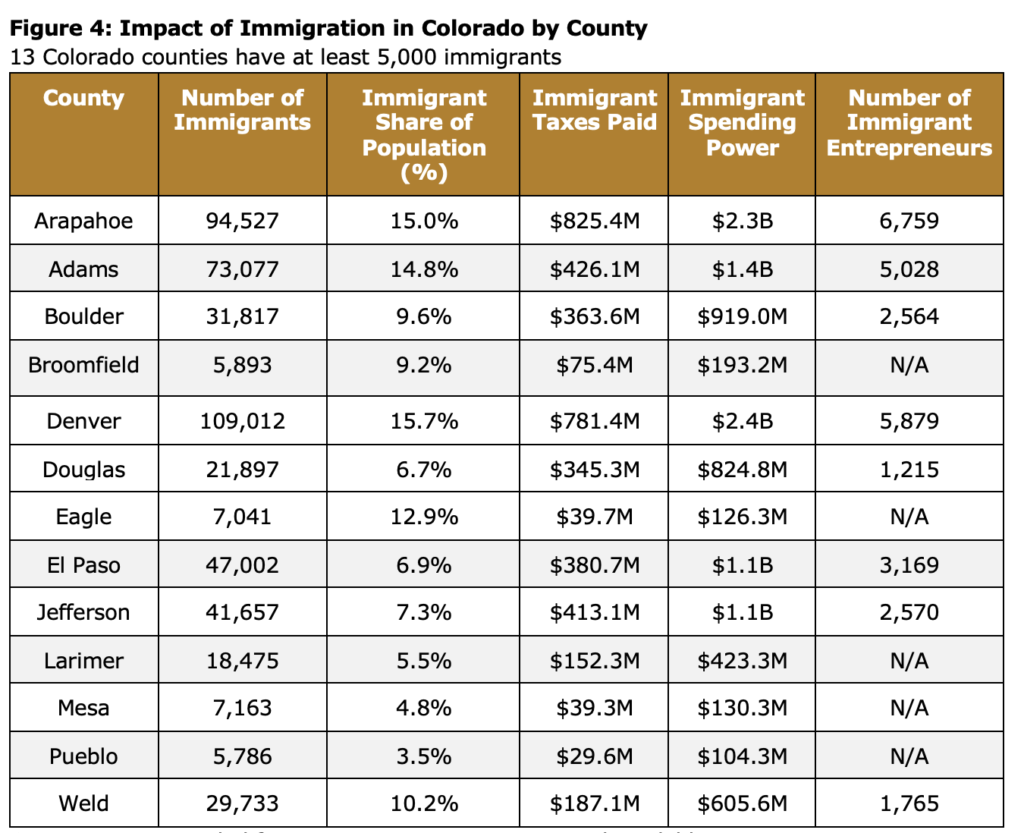 U.S. employers rely on visas to bring in foreign workers to fill key workforce shortages. Visa programs require applicants to demonstrate that they cannot fill the position with a U.S. worker. Thus, the high number of requests for visas by U.S. companies reflects a real need for foreign labor. Further, research has found benefits from visa programs on the U.S. economy as a whole. One study, for example, found that “as high-skilled H-1B immigrant admissions increase, so does the rate of American inventions.”[xvii] Other data shows that visas create more jobs for US-born workers.

Additionally, given the importance of immigrant entrepreneurship, many business leaders suggest there should be a specific visa for immigrants who want to obtain permanent residence in the U.S. to both start and grow a new business.[xix]

In 2020, Colorado was ranked third in the nation for receiving certified positions through the H-2B visa program, following Texas and Florida.[xx] Under the H-2B visa program, U.S. employers can hire foreign workers to perform nonagricultural labor or services on a temporary basis. In 2020, 46.1 percent of H-2B visas nationwide were issued for groundskeeping and landscaping positions.[xxi]

Other visa programs include the H-1B visa for high-skilled, specialty occupations, H-2A visas for temporary agricultural positions, and permanent visas for employers to hire foreign workers on a long-term basis. In 2016, Colorado employers received certification from the U.S. Department of Labor for 22,215 positions across a wide variety of occupations and geographies. This included:

Top cities and occupations for the different visa programs in Colorado are displayed in Figures 5 and 6. 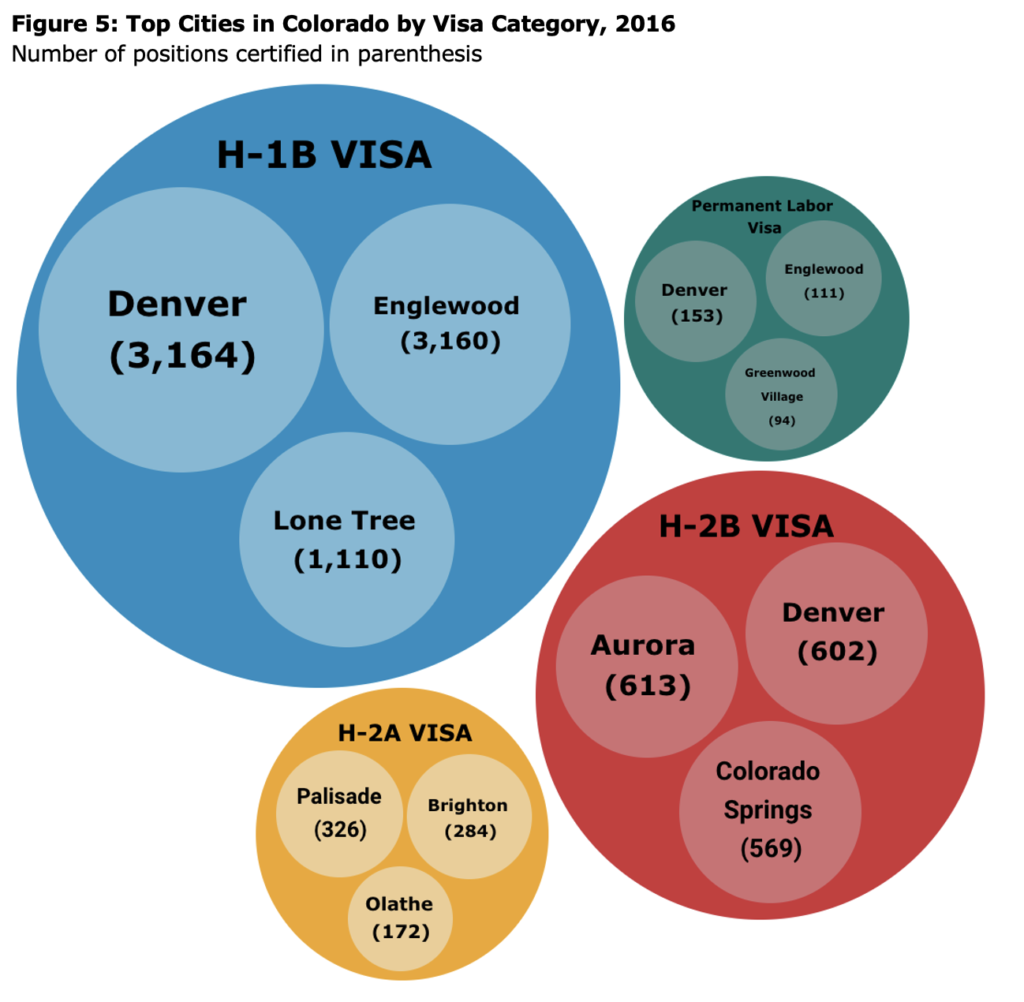 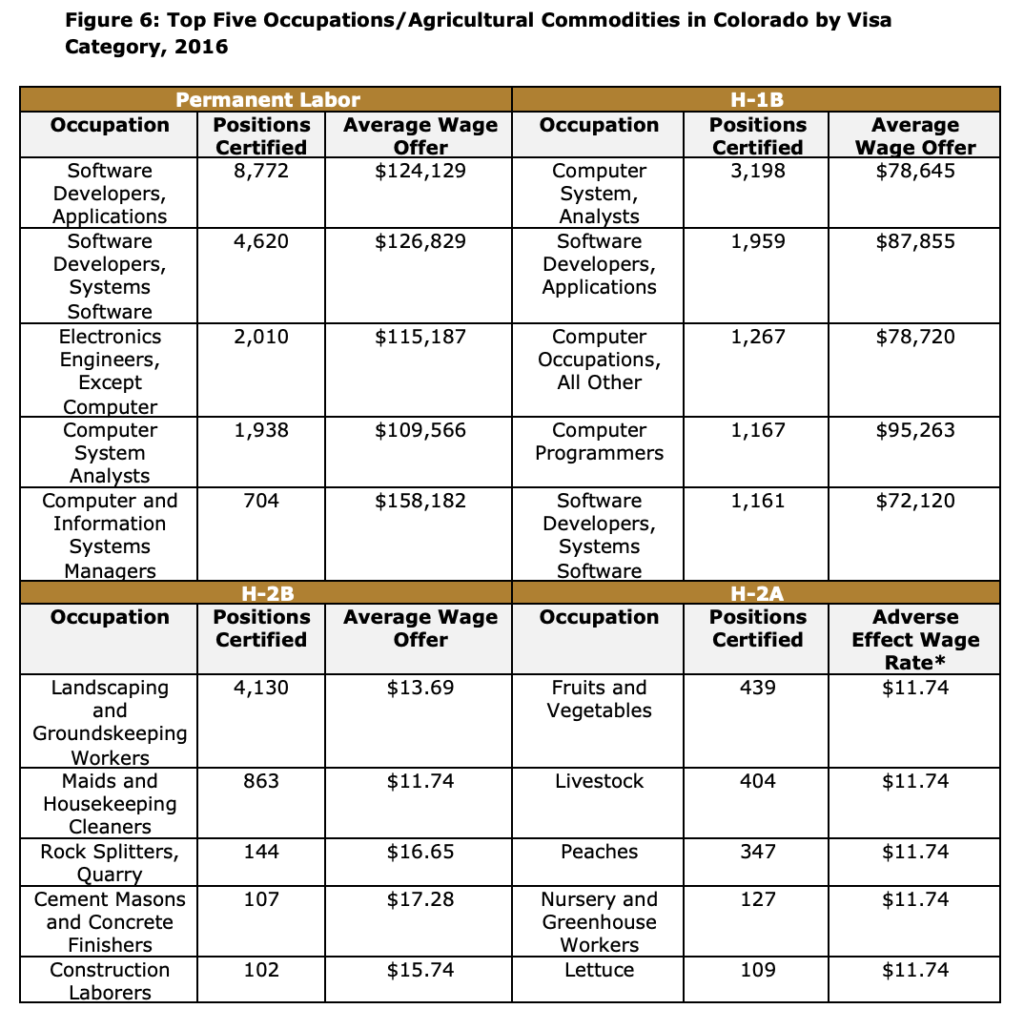 Research shows that immigrants strengthen the U.S. economy through their entrepreneurship, tax contributions, spending power and by filling critical workforce gaps. U.S.-born workers see more job opportunities and higher wages as a result of immigration. Currently, there is a complex array of laws, visa categories and regulations that often overlap and create inefficiencies. Establishing a coherent and fair immigration system for foreign workers who wish to legally contribute to the US economy is a priority of business leaders and many policymakers. Already the policy landscape is beginning to shift under a new presidential administration. As regulatory changes around immigration and foreign workers continue to occur, the following organizations serve as resources for finding up-to-date information: