The following series of figures show the impact of policies in response to COVID-19 on Colorado’s economy. Most figures show the changes from February 2020, a full month prior to Colorado’s stay-at-home order, through November 2020, the most current month of data. Following the most severe shocks brought on by the stay-at-home orders in March, the Colorado economy had been on a general trend of recovery through October. However, the November data shows a reversal in growth as the number of jobs in the state declined for the first time since April. While labor force participation has been more volatile than employment levels, the statewide labor force participation rate also declined in November after consecutive months of improvement since July. Given the increased restrictions on businesses through Thanksgiving and the holidays, and the surge in both initial and continued unemployment insurance claims, it is likely that December data will only show this trend to have worsened.

When respondent results are broken into sub-groups, there may be different trends from the aggregated level. 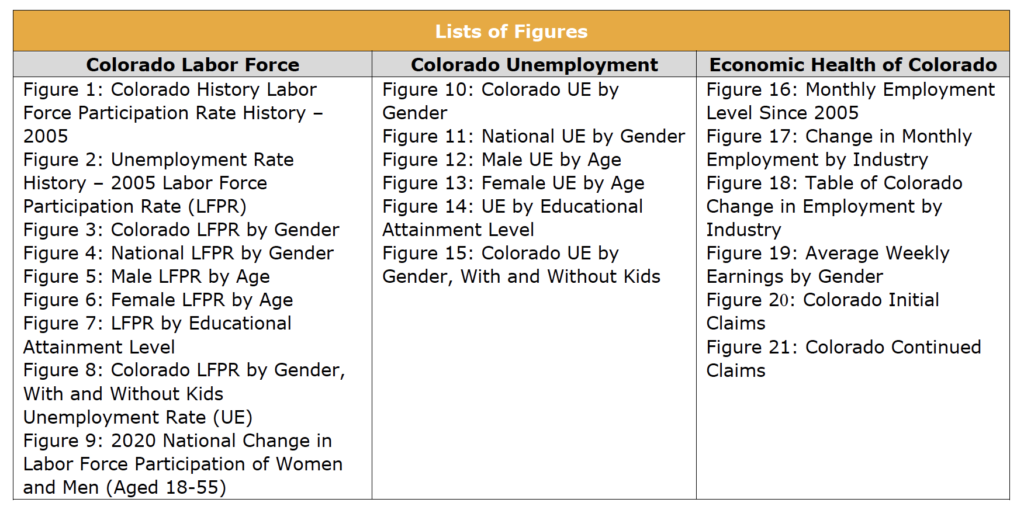 The LFPR and UE rates shown in Figure 1 and 2 reflect high level trends in the Colorado workforce from January of 2005 through November of 2020. The Federal Reserve Economic Data (FRED) has been reporting the data from the Current Population Survey (CPS). Here we can see the trends before and after the Great Recession in 2008 along with the COVID-19 pandemic. 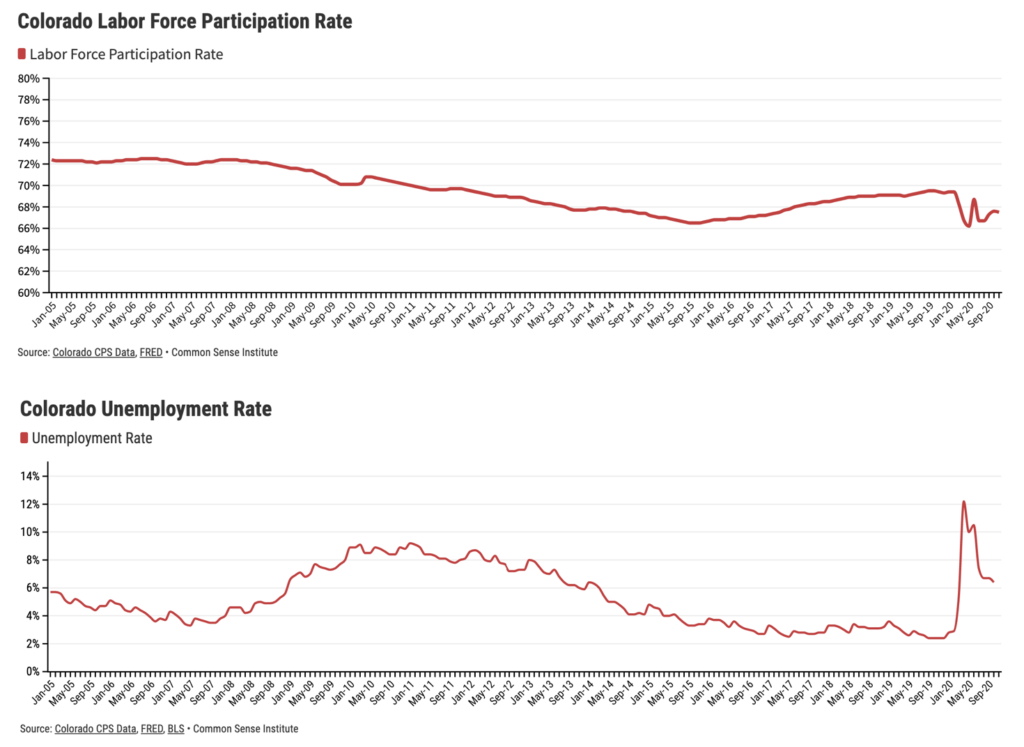 During the pandemic Colorado’s LFPR has remained higher than the US national average, which is consistent with historic trends. 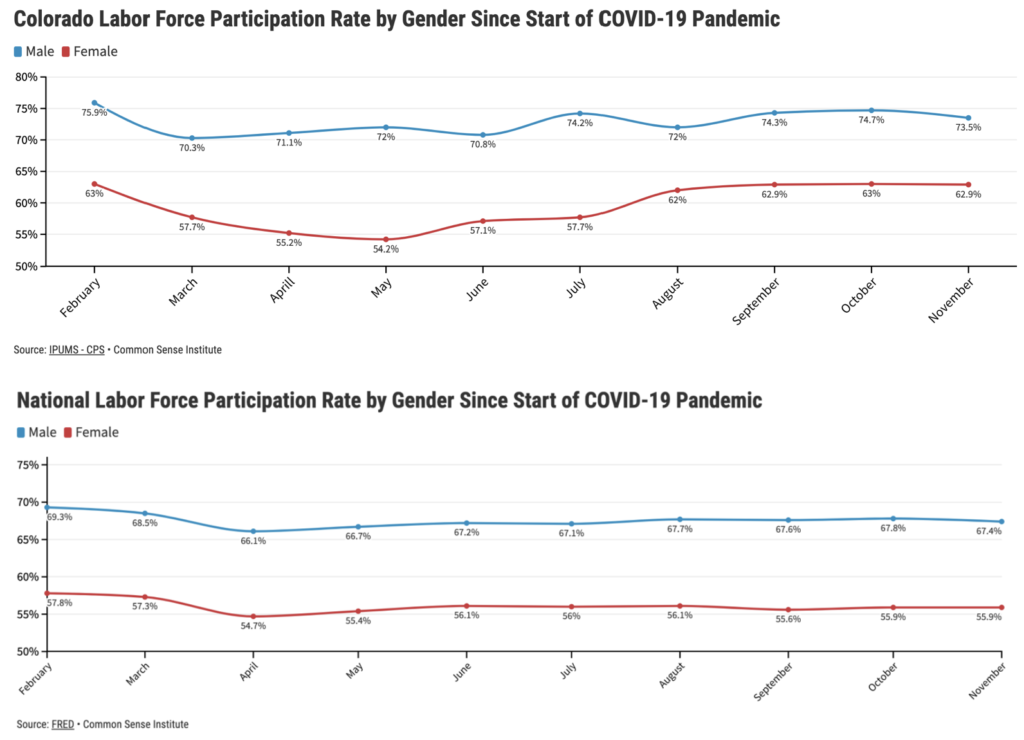 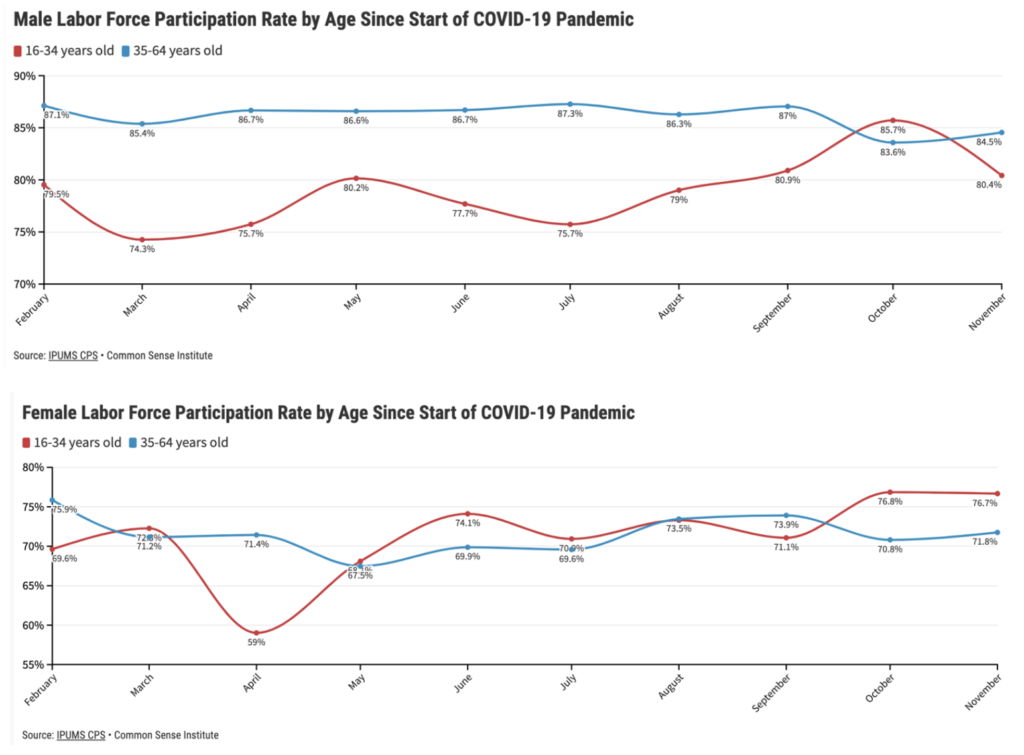 When comparing February to November, we learn that all three educational attainment levels are below their “pre-pandemic” rates.

29% of Coloradans have a High School (HS) diploma, GED, or less. When broken down by race, of those with a HS diploma, GED, or less, 28.3% are Hispanic, 16.9% are American Indian, 13.9% Asian, and 10.2% are Black. Educational attainment inequalities have been illuminated and deepened by the economic fallout from the COVID-19 pandemic.[1]

Figures 8 and 9: Colorado LFPR by Gender, With and Without Kids

Figure 8 and 9 depict the month-to-month changes in LFPR relative to February over the last ten months whether at the state, or national level. While the national averages indicate trends which are more consistent across each group, the Colorado data shows more volatile monthly changes. However, one trend is clear and consistent between the two figures. Parents, and particularly mothers, have been impacted significantly more than the other groups. As of November 2020, the LFPR for women with kids was 8.6 percentage points below its February level of 79%, indicating 1oe in every ten mothers who was in the labor force prior to the pandemic has dropped out.

A study by the Rand Corporation found that parents with children at a more dependent stage, are more likely to leave the workforce.[2]  Nicole Riehl, president of Executives Partnering to Invest in Children, said “working women with children, disproportionately women of color, are leaving the workforce in droves due to demands placed on families during this pandemic.”[3] Having to choose between employment and childcare is not easy. 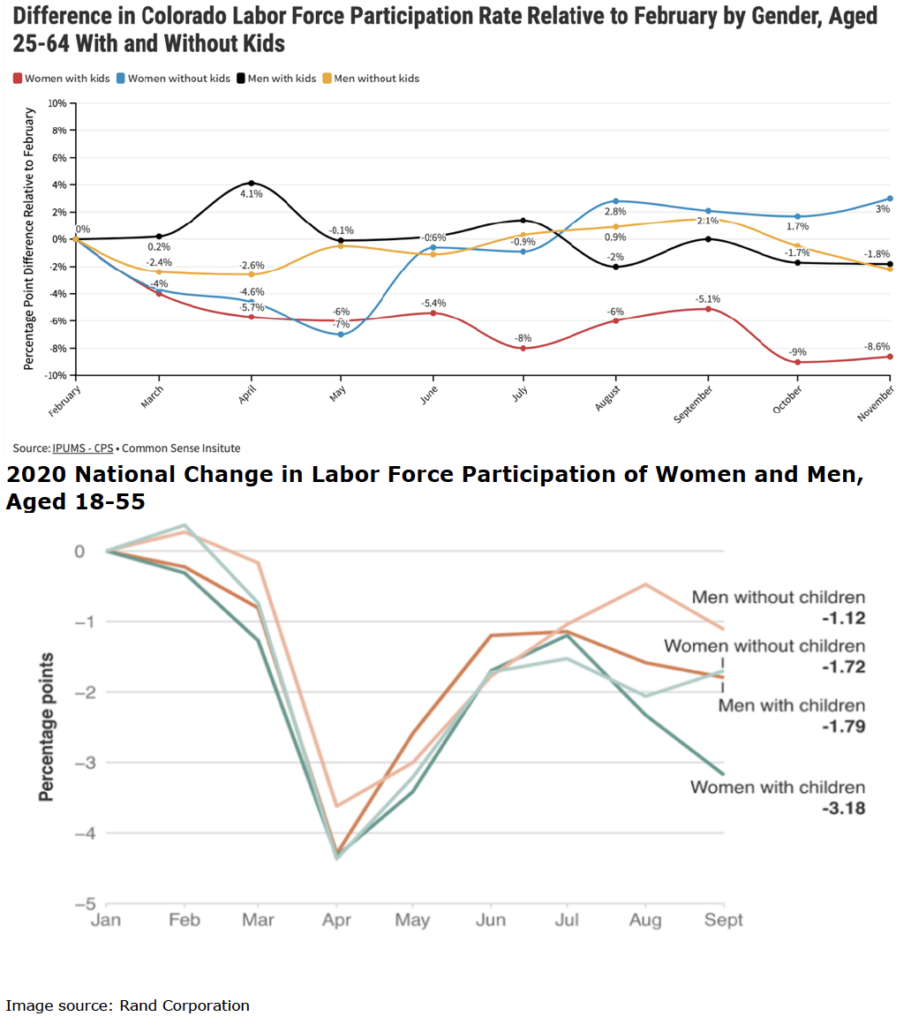 Figures 10 and 11: Colorado and National Unemployment Rates by Gender

The statewide unemployment rate has remained around 6.4% since September 2020. Yet, during the months of September through November there were significant changes to both the number of jobs and the labor force participation rate. Therefore, the UE rate remaining around 6.4% reflects the facts that each month, the number of jobs and the size of the labor force grew or fell at about the same rate, in order to keep the UE rate relatively consistent.

The data indicate that UE rates have varied slightly between men and women over time. This tells us that the working conditions are still changing within some demographic groups, in ways where the states average may not always be reflected. In the early months of the pandemic the gap in UE rates between men and women grew at both the state and national level, however the gap has remained tighter in recent months. 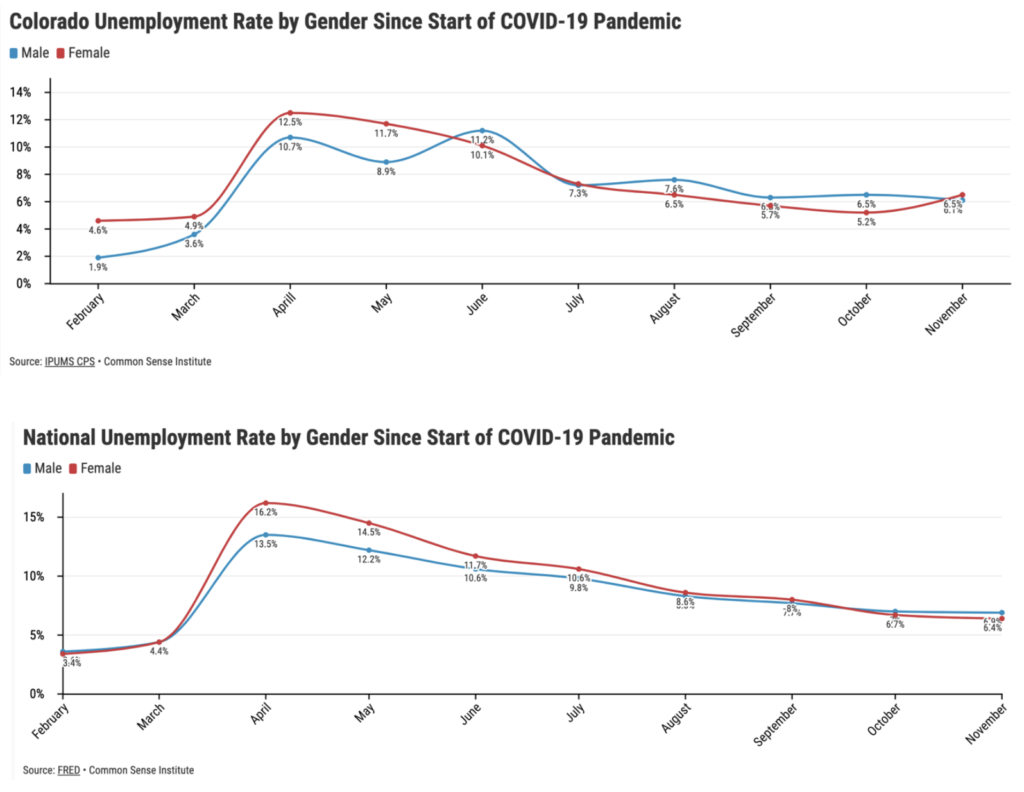 Figures 12 and 13: Male and Female Unemployment Rate by Age

The unemployment rate for women above 35 was below its pre-pandemic level; this reflects the large decline in labor force participation, more so than a recovery of employment. Those below the age of 35 may have higher UE levels because their LFPR did not fall and younger age groups tend to be concentrated in more service-related jobs, i.e., entertainment, food service, hospitality, and tourism, etc., as those have less educational barriers.[4] These specific industries have been more impacted by COVID-19. 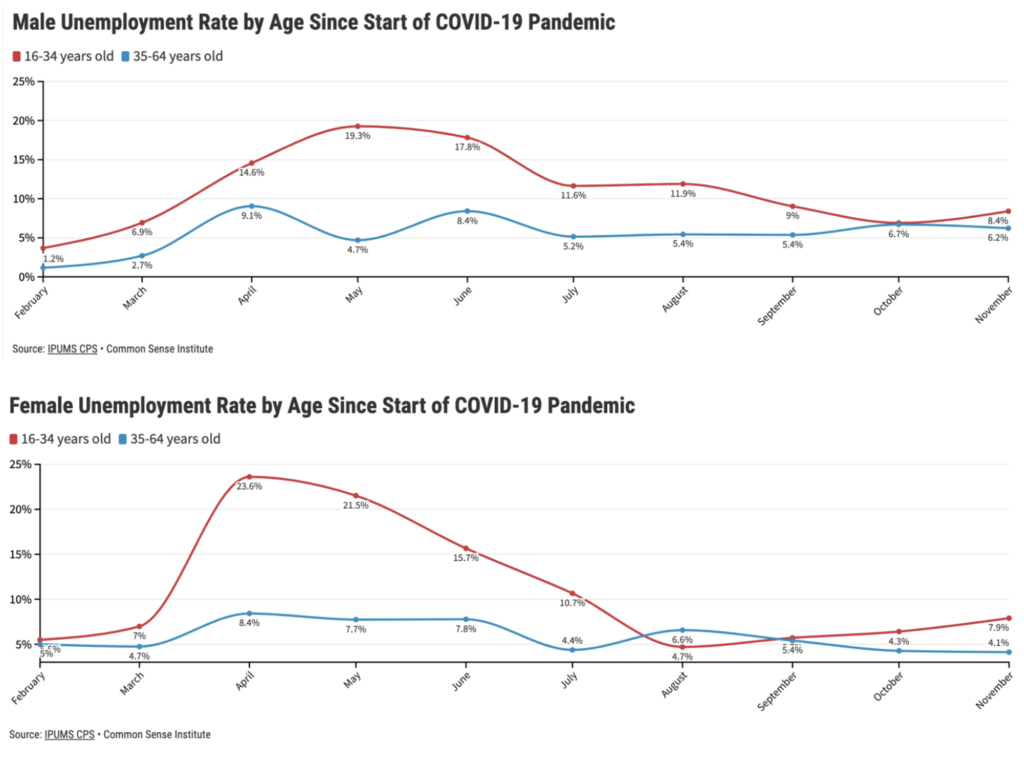 Figure 15: Unemployment Rate by Gender for With and Without Kids

Similar to the previous figures showing the changes in unemployment rates, when broken down by gender and whether or not the individual has children, the monthly data indicates recently there has been lower volatility in the UE rate than in early months of the pandemic.

Due to social distancing restrictions, the leisure and hospitality industry has been the most impacted sector since the start of the pandemic, down 55,000 jobs in November relative to February. Leisure and Hospitality is the industry classification that includes, arts, entertainment, and recreation; accommodation; food services, and restaurants. Researchers in NYC, the COVID epicenter in early 2020, found 1.4% of COVID-19 spread was from restaurants, whereas 73.5% was through personal gatherings.[5] Relative to Colorado, the Colorado Restaurant Association finds, “restaurants employ more minority managers, and women in management and ownership positions than any other industries.”[6] Efforts to minimize the spread of the virus must be weighed against the long-term socioeconomic impacts minorities and women have experienced amid the pandemic. 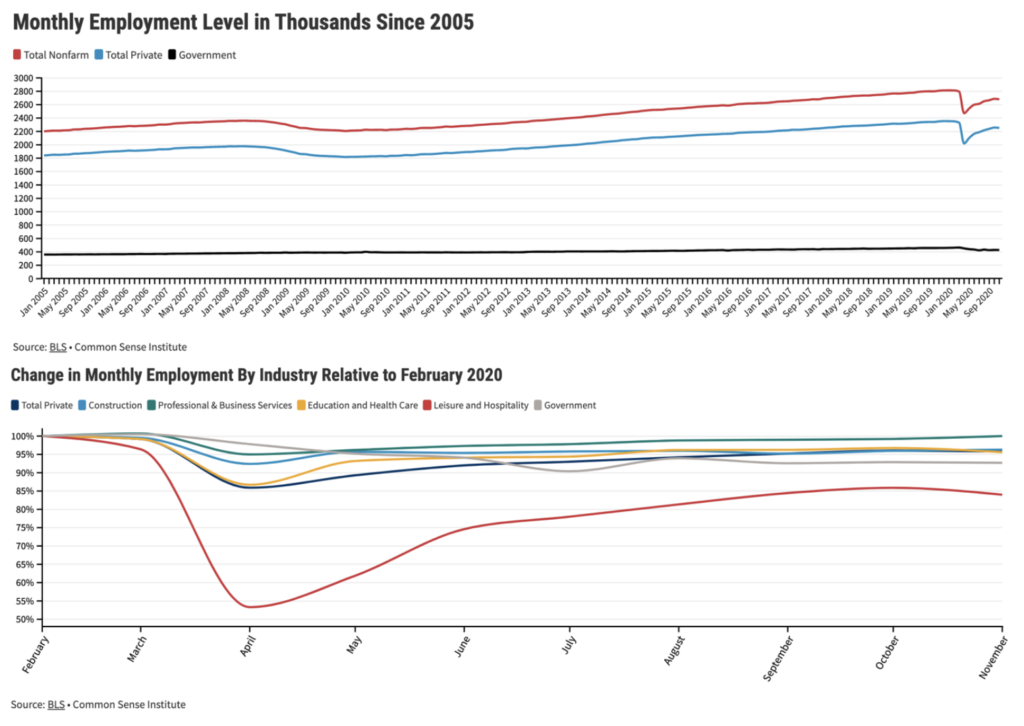 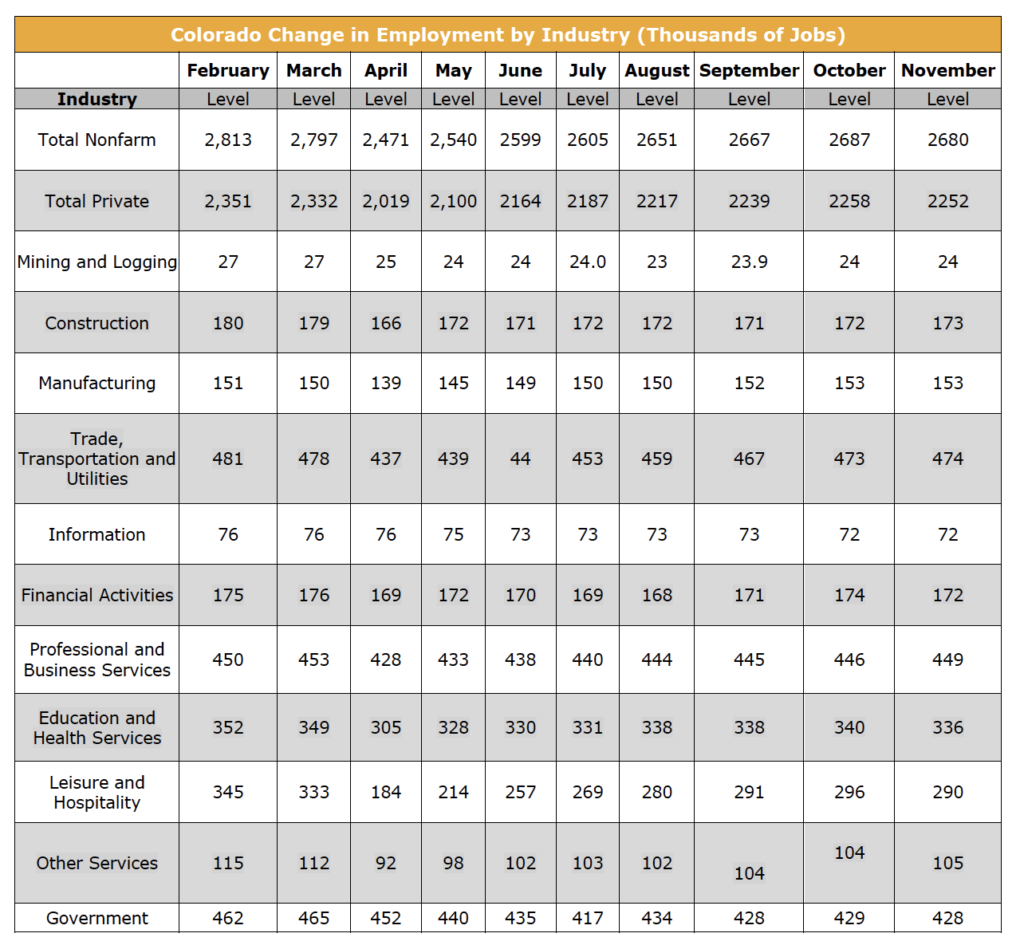 Lower-wage jobs were disproportionately impacted during the stay-at-home order and a large number of women who left the labor force likely worked part-time. Part-time workers have fewer hours and earn a lower wage, resulting in a lower AMW.

When we look back at 2018, women in Colorado earned $789 per week, or 81.1 percent of the $973 median for men.[7] The wages of those working part-time are much lower than full-time, and nationally there are more women working part-time jobs than men.[8] From October to November, the monthly wages increased $84 for women and $434 for men, this equates to a 14% reduction in women’s earnings as a percent of men’s. 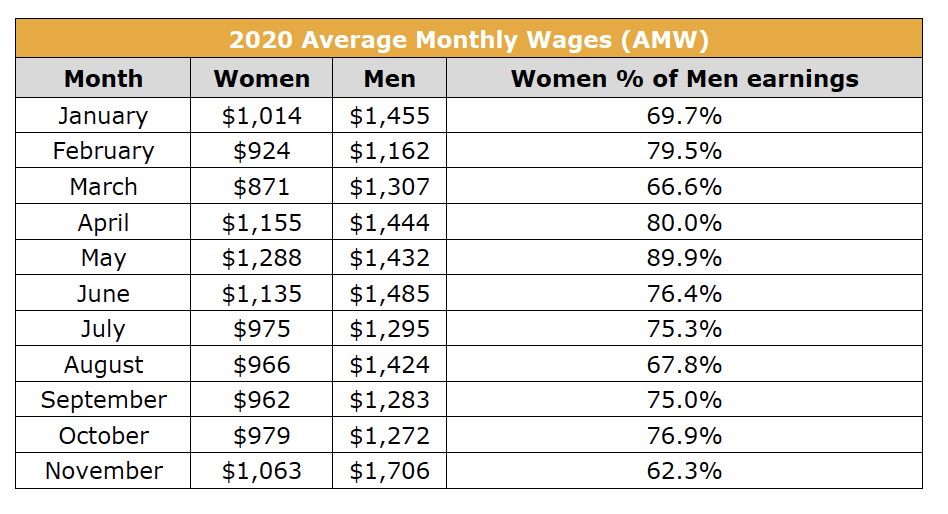 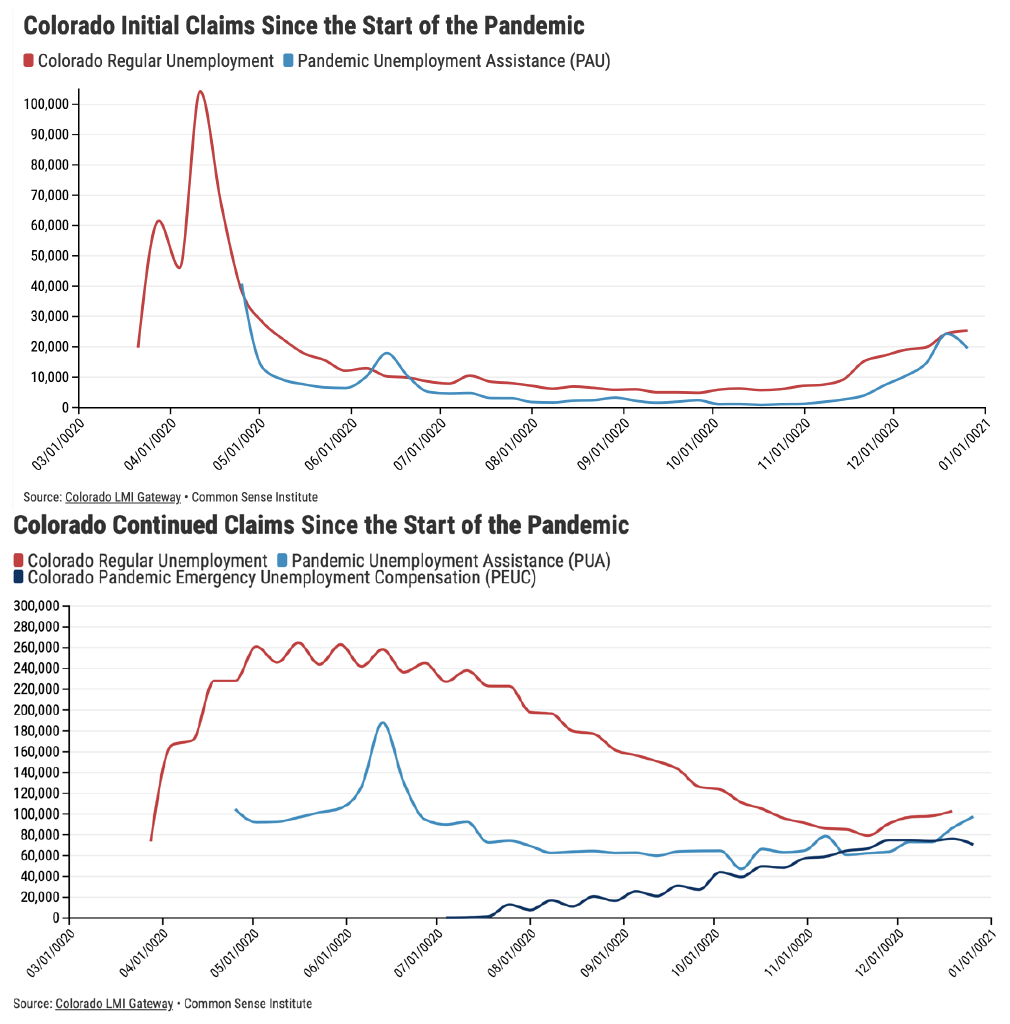 While the most severe shocks brought on by COVID-19 ended several months ago the lasting impacts are still being felt across the Colorado economy and labor force. This report focuses on the impacts of COVID-19 upon the Colorado labor force and overall economic health of the state.

The following series of charts show the impact of policies in response to COVID-19 on Colorado’s economy from February, the full month prior to Colorado’s stay-at-home order, through the September, the most current month of data. The figures include labor force participation rates, unemployment rates, employment levels, unemployment insurance claims, and new business formation. The data used in this report is sourced from the U.S. Bureau of Labor Statistics (BLS), U.S. Census Bureau (CENSUS), U.S. Department of Labor, and the Integrated Public Use Microdata Series – Consumer Population Survey (IPUMS – CPS).

The impacts of COVID-19 have disproportionately impacted some parts of our economy more than others. While the impacts on employment are most often highlighted, this brief summarizes the impacts on different groups within the state’s labor force.

The following series of charts show the impacts of policies in response to COVID-19 on the Colorado labor force from February through August 2020. February is included to reflect the month prior to the start of the pandemic. The monthly data are collected and reported by the US Bureau of Labor Statistics (BLS) and the Integrated Public Use Microdata Series – Consumer Population Survey (IPUMS – CPS) which is further broken down by: Gender, Age, Educational Attainment, and Both Genders With and Without Kids.

The impacts of COVID-19 have disproportionately impacted some parts of our economy more than others. While the impacts on employment are most often highlighted, this brief summarizes the impacts on different groups within the state’s labor force.

The following series of charts show the impacts of policies in response to COVID-19 on the Colorado labor force from February through July 2020. February is included to reflect the month prior to the start of the pandemic. The monthly data collected and reported by the US Bureau of Labor Statistics (BLS) is broken down by: Gender, Age, and Educational Attainment.

The impacts of COVID-19 have disproportionately impacted some parts of our economy more than others. Restaurants, cafes, large event venues, hotels, and other recreational activities have been severely impacted, with job losses that remain over 20%. This stands in contrast to the information and manufacturing sectors which are just 2% below their February level of employment.

The impacts of COVID-19 have not been equally felt across the labor market and certain business models have been disrupted significantly more than others. As expected, restaurants, large event venues, hotels and other personal services have been severely impacted.

This range in impacts across industries, is also reflected in changes across different groups within the labor market. Women and those with education levels lower than a college degree have been disproportionately negatively impacted.

The following series of charts show the impacts of COVID-19 on the Colorado labor force between February and May 2020, reflecting the month prior to the start of the pandemic and the latest available monthly data broken down into: Gender, Age, and Educational Attainment.