Colorado Budget: Then and Now

A Snapshot of State Appropriations and How They Have Changed

SIXTH ANNUAL RELEASE OF COLORADO BUDGET: THEN AND NOW

Colorado Budget Then and Now illuminates the changes in Colorado state budget appropriations over the last twenty years. The following figures provide a summary overview of revenue allocated to state departments through the budgeting process. The trends in appropriations reflect the shifting priorities brought on as a direct result of the laws and budgets passed each legislative session.

The findings of this report are generated from the annual appropriations reports compiled by the Colorado Joint Budget Committee Staff. These reports draw from each of the annual legislative bills, which authorize funding for each state department. The reports include appropriations from all funds including General Funds, Cash Funds, Federal Funds, Reappropriated Funds, and Capital Construction Funds. Appropriations for FY 2022 are considered final given they are for the most recent full fiscal year. FY 2023 appropriations are considered initial given they reflect an amount authorized by the legislature but may change over course of the fiscal year. FY 2024 appropriations are from the Governor’s proposal, but the full initial appropriations will be authorized by the legislature through the creation of the Long Bill during the 2023 session.

General Funds: General-purpose revenue is deposited into the General Fund and used for the state’s core programs, such as education, health care, human services, corrections, and general government (i.e., the legislature and Governor’s office). Cash Funds: are special-purpose funds that exist outside of the General Fund. They are funded with taxes, user fees, and fines earmarked for specific purposes and programs. Other large categories of cash fund revenue include revenue to other TABOR enterprises, employee pension contributions and interest income, voter-approved revenue, property sales, damage awards, and gifts. Federal Funds: are moneys received from the federal government to support specific purposes and programs. For some programs, such as Medicaid, state funding is matched with federal funding. Further, General Fund revenue is the only major state revenue source available to fund capital construction projects which is further appropriated from the GF.

Annual Appropriations
How Much Money Does the Colorado State Government Appropriate?

Each year, the state’s legislature approves a budget that dictates how public tax revenue will be allocated to the different government departments. The current budget cycle, fiscal year 2023, runs from July 1, 2022, through June 31, 2023. As of November 2022, the total initial appropriations for FY 2023, inclusive of operating appropriations minus reappropriations plus capital construction appropriations, are estimated to be $37,373,960,242. 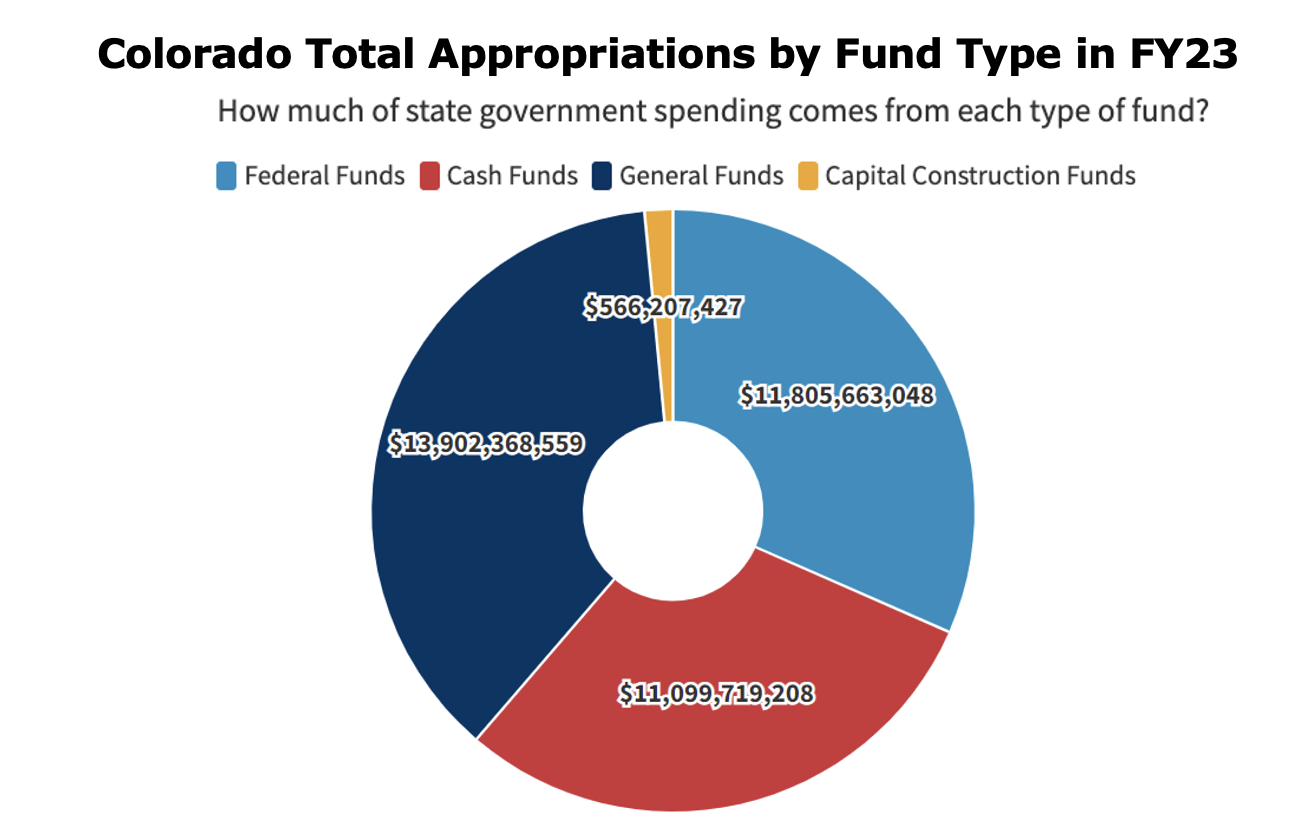 Significant Changes to Transfers in the Proposed FY24 Budget

The value of transfers, refunds, reappropriations, and investments brings the total size of the proposed FY24 budget to just over $42.6 billion. Transfers do not count towards a department’s appropriation. The transportation and K–12 education sectors received a combined total of almost $500 million in transfers in FY23 but will receive none in FY24. Education will not receive additional transfers because the FY23 budget bought down its budget stabilization factor through FY25.

Change in Total Appropriations By Department

From FY21 to FY23, the General Fund’s operating total grew from $11.2 billion to $13.9 billion, a 24% increase. Based on the FY24 initial budget proposal, the General fund is expected to increase another $783 million to $14.7 billion, a further 5.6% increase. The largest portion of this $783 million increase will be to Health Care Policy and Financing which will see $346 million added to its budget, accounting for 44% of the total increase.

Colorado Total Appropriations to Each Department in FY23 (units in millions)

The departments of Education, Corrections, HCPF, Higher Education, Human Services, and the Judicial Branch make up 90.4% of General Fund appropriations in FY23. Often, money is transferred from the general fund to the Highway Trust Fund to be used for transportation projects. This transfer does not show up as an appropriation.

The difference in spending between FY03 and FY23 reflects both an increase in overall economic and population growth but also a shift in state spending priorities. In nominal terms, HCPF appropriations increased 459% over the last twenty years while the Colorado population grew just 30%. 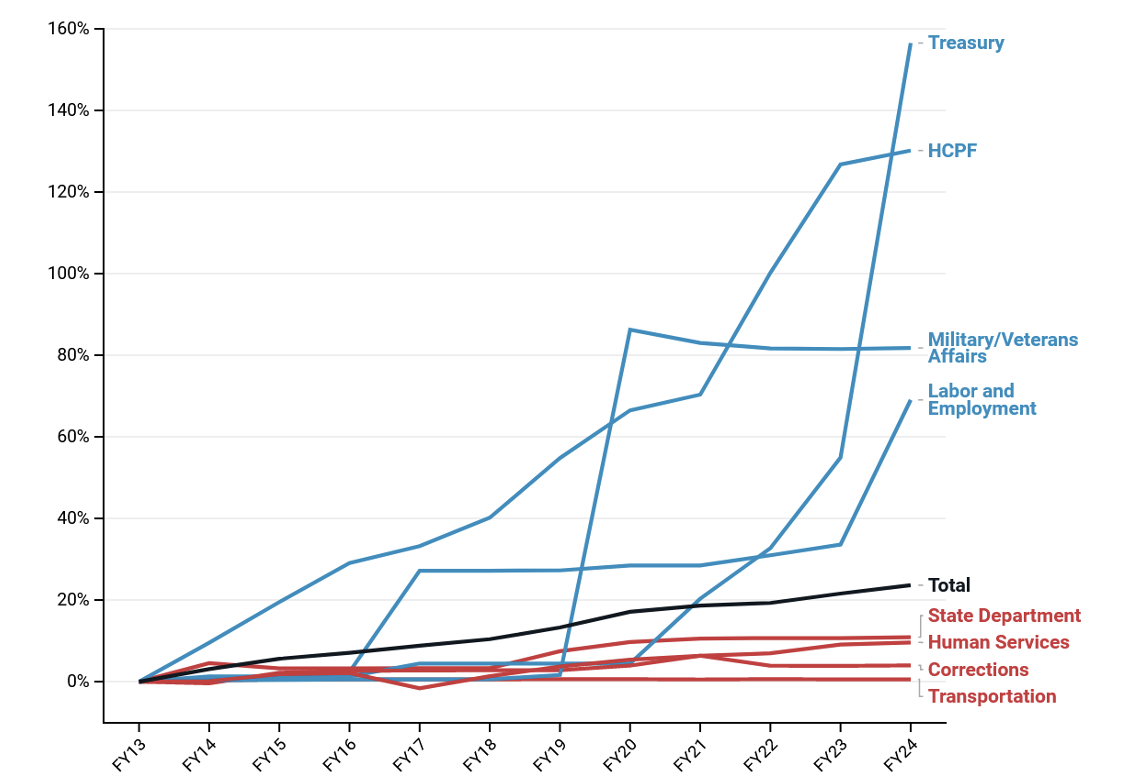 Over the last 10 years, Colorado state government FTE has grown from 52,077 to 64,384. The Treasury Department has seen the largest FTE percentage growth at 156%, although the Department is still relatively small with only 80 FTE. HCPF was second in FTE growth rate with 130% FTE growth since FY13. The Department of Transportation has remained almost completely neutral, only growing 0.5% over the last decade.

The Difference in the Share of Colorado’s Total Appropriations

From FY02 to FY12, HCPF and Transportation were the only major departments to increase their shares of total appropriations. The share of appropriations to HCPF accelerated in last decade from FY12 to FY22, gaining an additional 10.1%, making it the only department to see its share increase. During that same time period, Education’s share decreased by 4.8%.

The Difference in the Share of Colorado’s General Fund Appropriations

Most departments’ shares decreased from FY03 to FY13; this could be attributed to the impact of the Great Recession along with the large increases in the shares to HCPF and Corrections. HCPF’s share grew by 10.58 percentage points from FY03 to FY23, while the shares appropriated to the Departments of Higher Education and Education shrunk by 2.54 and 9.3 percentage points, respectively.

Appropriations are adjusted for the population and inflation

Adjusted for inflation and population growth, total state government appropriations increased by 84% from FY03 to FY23. Population estimates come from the Colorado Demographer’s Office and annual inflation is derived from the Denver MSA CPI developed by BEA.