$67.2 Billion in COVID-19 Relief Aid, including $3.9 Billion in New State Discretionary Dollars Should Make That Possible

In response to the economic impacts associated with COVID-19, both the federal and Colorado state governments have passed multiple massive spending and relief bills. All with the intent to address the public health crisis and inject financial stimulus into a faltering economy; the combined total aid, either already spent or expected to be spent, is estimated to be $67.2 billion, an amount equal to 17% of Colorado’s GDP.

The three largest federal aid packages, the American Rescue Plan Act (ARPA), the Consolidated Appropriations Act, 2021 (H.R. 133), and the Coronavirus Aid, Relief and Economic Security (CARES) Act totaled over $5 trillion nationally. This count is inclusive of household stimulus payments, PPP loans and all other aid; Colorado’s share of these three packages and several other smaller federal bills is estimated to be $65.2 billion.[i]

The current Colorado state budget, which was passed last June, reflects early pandemic forecasts previously indicating the state would face major revenue shortfalls. As those dire revenue projections did not come to pass, state tax revenue is coming in significantly higher than what was budgeted. The governor and general assembly have chosen to spend a total of $2 billion of surplus state tax revenue through two different state stimulus packages. 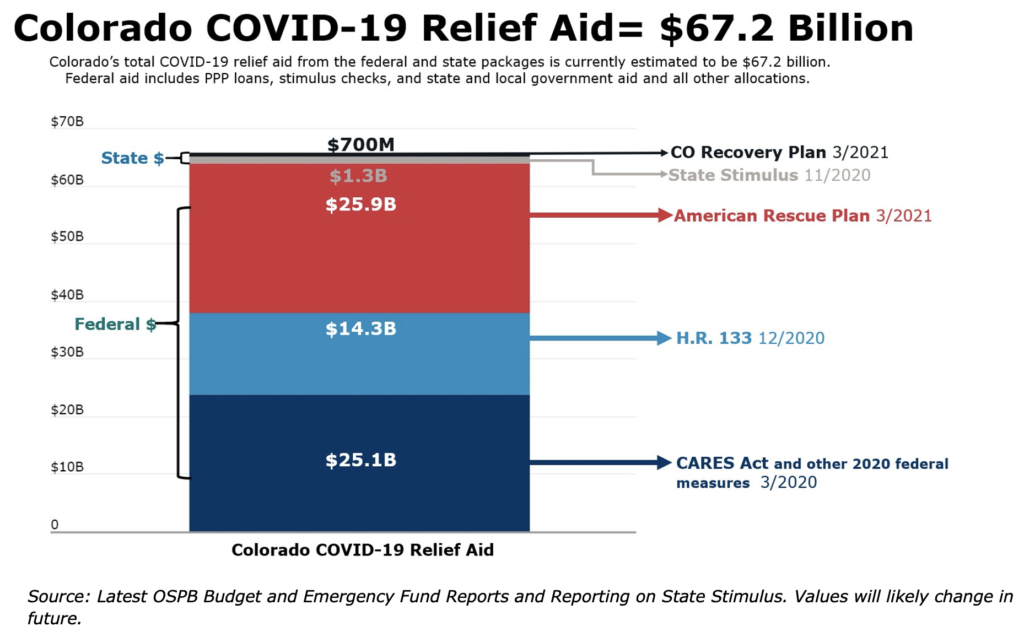 While there are still gaps in reporting for exactly where all federal funds will ultimately go, recipients can be summarized into three main categories: households, businesses, and state and local governments. Current estimates indicate the following approximate shares to each category that have either received federal relief aid funds or expect to receive funds; 41% to households, 25% to businesses, 18% to state and local governments and 16% is unspecified. The amount Colorado businesses will receive in new PPP loans—under ARPA—are based on previous shares of total PPP loans authorized, for an estimated amount. 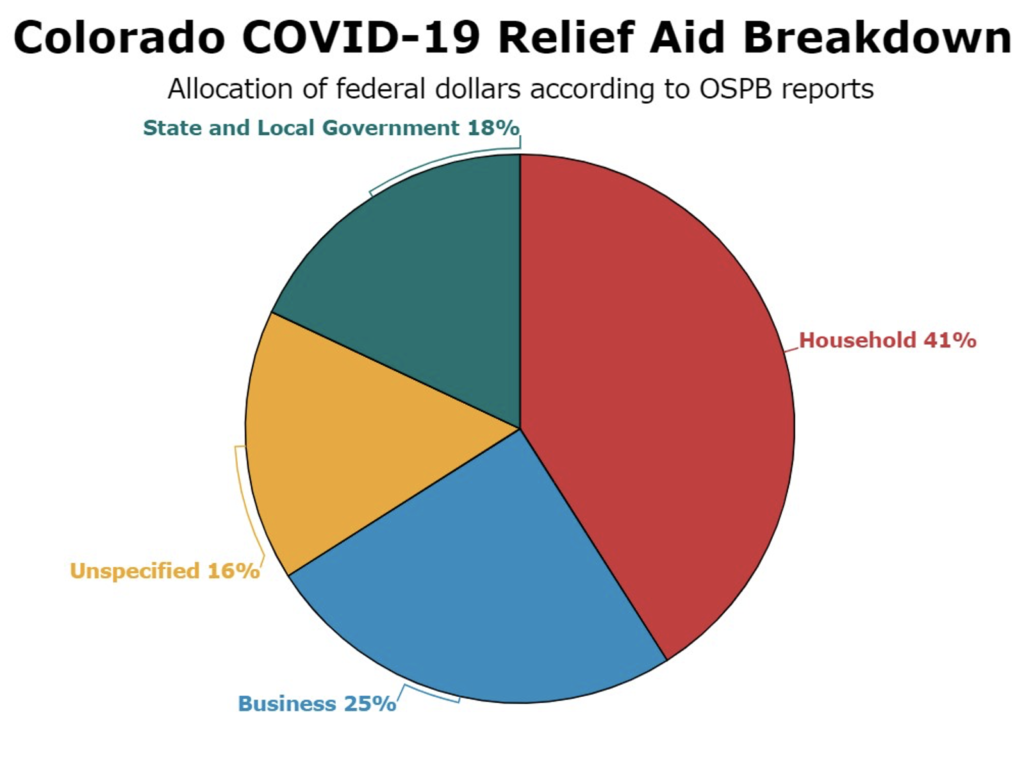 There is at least $3.9 billion that remains to be spent at the discretion of the governor and general assembly from the latest federal stimulus package.

Plan Act, included $6.2 billion in direct aid to state and local governments in Colorado. Approximately $2.2 billion will be allocated to local governments, leaving the state with at least $3.9 billion to be spent over the next four years. There are, however, a few strings attached. Where there are federal legal limitations, a memo to the Colorado Joint Budget Committee suggests that this money could be used towards the $700 million in commitments made in the second state stimulus, thereby allowing the General Fund dollars to be allocated without restrictions.[ii] Public statements have been made that the Governor’s office and the General Assembly will jointly decide on spending priorities; the administration is presently in the middle of a public engagement tour across the state to seek input on how to spend the remaining funds.[iii]

Over the past 12 months, nearly all state and federal relief funds have been used to address short-term, immediate economic recovery and public health needs. The stimulus aid, along with the rapid rollout of vaccines, has Colorado on the road to recovery. Real GDP in 2020 was down just 1.5% relative to 2019. State tax revenue to the General Fund is anticipated to fall by only 1.1% in FY21 and is projected to increase by 8.5% to a new state high of $13.8 billion in FY22. Unemployment insurance payments have been extended, and the PPP loans will continue through the end of May. At this point, accelerating the recovery is more dependent on lifting restrictions than expending additional dollars on short-term needs.

Policymakers should use this opportunity to consider the state’s long-term needs and ensure the remaining stimulus funding supports ongoing growth and prosperity for all Coloradans. The $3.9 billion presents a unique opportunity for Colorado to continue to invest in its recovery while prioritizing the future. The state has several major fiscal crises looming that could be directly addressed with this pot of one-time funds. Similar to a household budget, when families have their basic needs met, but have credit card debt, it is advisable to use surplus cash to pay off debt and avoid paying interest. Similarly, Colorado, having addressed the immediate COVID-19 crisis, now has the opportunity to pay off its outstanding debt and save the state from future budget constraints or pressure to increase taxes. Doing so will pay long-term dividends, as the state will have more available funding to spend on education, transportation, health care and other priorities rather than issuing debt payments, which will ultimately be on the back of all taxpayers.

While a complete assessment of the most acute state needs should be done prior to committing the available discretionary aid, here are four important areas to consider.

Colorado is currently one of 19 states taking federal loans for unemployment insurance. These loans continue to increase weekly, as the surge in benefit payments depleted the state’s UI Trust Fund in August 2020. Colorado ranks 9th in federal UI Trust Fund loans outstanding per resident and the fund is projected to be nearly $1 billion in debt by the end of June 2021.[iv] Some other states, including Florida and Arizona, have used federal stimulus to replenish their UI trust funds and prevent significant future tax increases.

Under current projections from the March 2021 Legislative Council forecast, taxes paid by businesses to the Unemployment Insurance Trust Fund are expected to increase by almost 22% per year (from $618 million to $1.087 billion) through FY 2023. Each business’s contribution rate is determined by its utilization of the trust fund over the previous fiscal year, the fund’s balance, and the assessment of a solvency surcharge, so some businesses, especially those which have struggled to retain workers through the pandemic, could endure much larger increases. By 2023, an employee’s total premium could increase from as little as .07% of wages to as much as 13.1% due to the scheduled rate increase, the surcharge triggered by the trust fund’s depletion, and an increase in the taxable wage base. Even a business that has maintained a net-zero utilization of the fund will be charged over 34% more in FY23, per employee.

2. Pay down some of PERA’s unfunded liability to prevent future rate increases that reduce funding for schools and lower take-home pay for teachers.

While PERA’s 2020 financial performance will not be known for several months, it will undoubtedly retain more than a $30 billion unfunded liability and continue to trigger employee and employer rate increases. These PERA rate increases take money away from many government functions, including K-12 education. Higher PERA payments mean less money is available for school operations, and the take home pay for employees such as teachers goes down. For every $1 in state contributions to PERA above the actuarially determined contribution rate (ADC), the unfunded liability is reduced by approximately $8. Therefore, a $500 million lump sum payment would reduce the unfunded liability and nominal payments over the next 30 years by approximately $4 billion. Restrictions on ARPA funds would prohibit a direct deposit to the pension fund, however as the federal funds could free up state General Fund dollars, they still likely provide the opportunity to improve the fund solvency and lower future costs.

As the federal government appears to be debating a new federal infrastructure spending program, this item may be covered through even more federal dollars. While the bill has yet to be introduced, there is the expectation that one will be debated during the 2021 legislation session which proposes additional funding towards transportation, through a collection of new fees. Until these are finalized, one-time funds may be able to fill existing gaps in state transportation projects the system sorely needs. According to the Colorado 2040 Statewide Transportation Plan, the insolvency of the Highway Trust Fund will result in a $1 billion annual funding gap for the state over the next 25 years.[vi]