The heart of Common Sense Policy Roundtable’s mission is to bring facts to the important debates facing our state. In a time filled with rhetoric and spin, CSPR brings sound fiscal analysis, economic modeling and the truth to Coloradans. From pension reform to energy, housing, education, and beyond, CSPR addresses Colorado’s most imperative public policy issues with precision and facts.

Founded in 2009, CSPR has become a leading source for facts on issues facing Colorado. CSPR is a free enterprise think tank dedicated to the protection and promotion of Colorado’s economy. CSPR believes that the more informed policymakers and voters are, the better the decisions that will be made for Colorado’s future.

One of the most significant things CSPR has done since its founding is license the REMI Tax PI model, a dynamic economic modeling program created by Dr. George Treyz and others at Regional Economic Models, Inc. (REMI). The REMI model provides fact-based analysis that quantifies the broader economic impacts associated with policy changes.

Along with CSPR’s REMI partners Colorado Concern, the Colorado Association of REALTORS®, the Colorado Bankers Association, and the Denver South Economic Development Partnership, CSPR produced six detailed studies in 2018 on issues ranging from education to energy. In 2019, CSPR has already modeled the impacts of two of the most debated issues in the 2019 Colorado legislative session: SB19-188, the state-run family and medical leave bill, and SB19-181, a new oil and gas policy.

The following analysis summarizes a selection of measures from the 2019 legislative session that will likely have the largest impacts on the Colorado economy and individual economic opportunity moving forward.

About the 2019 General Assembly

One party achieved the trifecta in the 2018 midterm elections. Democrat candidates won five seats in the State House of Representatives and two seats in the State Senate which secured majorities in both chambers of the legislature. In addition, former US Congressman Jared Polis was elected Governor giving Democrats control of the executive branch.

Legislative Committees of Reference often serve as indicators of the priorities of the party in control of either chamber. Under new leadership, several committees were restructured at the beginning of the 72nd General Assembly. In the House of Representatives, the Agriculture, Livestock, and Natural Resources Committee was renamed the Rural Affairs & Agriculture Committee. Additionally, the Local Government Committee was combined with the Transportation Committee, while Energy was moved out of the Transportation & Energy Committee, and Environment was moved out of the Health, Insurance & Environment Committee, to form the Energy & Environment Committee. The Senate saw a less drastic restructuring; Energy was moved out of the Agriculture, Natural Resources & Energy Committee and combined with the Transportation Committee.

The first regular session of the 72nd Colorado General Assembly began on January 4, 2019, and adjourned 120 days later on May 3, 2019, as required by law. Committees and task forces appointed by the legislature and the governor’s office will begin work on a number of issues over the next six months. The General Assembly will begin its second regular session on January 8, 2020.

BUY, HOLD, OR SELL? IMPACT OF THE 2019 LEGISLATIVE SESSION ON THE OUTLOOK FOR THE COLORADO ECONOMY

According to the Colorado Sun, “The Capitol was embroiled in its wildest lawmaking term in years — one that saw Democrats learning their way, lawsuits, overnight work and some big policies that will change Colorado.”1 Business advocates called this session one of the worst ever while others celebrated the passage of progressive ideas.

However, this analysis shows uncertainty is a common theme of the impacts of multiple new measures on the Colorado economy. For instance, the passage of SB19-181 allows local governments and the Colorado Oil and Gas Conservation Commission (COGCC) to pass new laws and regulations governing the oil and gas industry without consideration of economic or technical feasibility. These new regulations could impact new oil and gas production “up to a moratorium” as cited in the original fiscal note, and our report on the bill found that just a reduction in new oil and gas production by 1/3 would reduce state and local tax revenue by $4.4 billion over the next 11 years.2

The original version of SB19-188, a proposed new state-run family and medical leave enterprise, faced risks of insolvency based on its assumptions. If the utilization of the program were to have just increased from the assumed 3.5% to 5.4%, it would have been insolvent.3 The bill was ultimately changed to simply require an actuarial study of a potential program and create a task force to review and recommend changes ahead of the 2020 session.

The bottom line is this: the impacts of many bills in isolation are uncertain, let alone in aggregation, and uncertainty is not good for business.

No doubt, the policies passed by the 2019 General Assembly will impact the cost of doing business in Colorado and could have significant repercussions for the Colorado economy. However, there remains a high level of uncertainty surrounding the implementation and regulatory framework of many new laws. This level of uncertainty informs an overall rating of “HOLD” for the impact of the 2019 legislative session on the outlook for the Colorado economy.

We recognize the outlooks may differ for certain sectors, given the specifics of each change. Business owners, investors, and entrepreneurs who are weighing financial decisions with regards to how to grow or conduct business in Colorado have voiced concern. A comprehensive survey of CEOs recently showed that Colorado’s ranking among the “Best and Worst States For Business” fell from 8th to 12th however, Colorado remains an attractive destination for a talented and educated workforce.4 This workforce remains a strong pull for firms despite the potential escalation in costs. The specifics of how some of the new bills get implemented will ultimately determine the extent to which the higher cost of doing business is a deterrent to further employment opportunity growth in Colorado.

Each featured bill in the following tables is assigned one of three ratings:

The ratings were determined after an evaluation of the potential impacts in three areas.
Note: Not every featured bill is included in each of these evaluation sections. 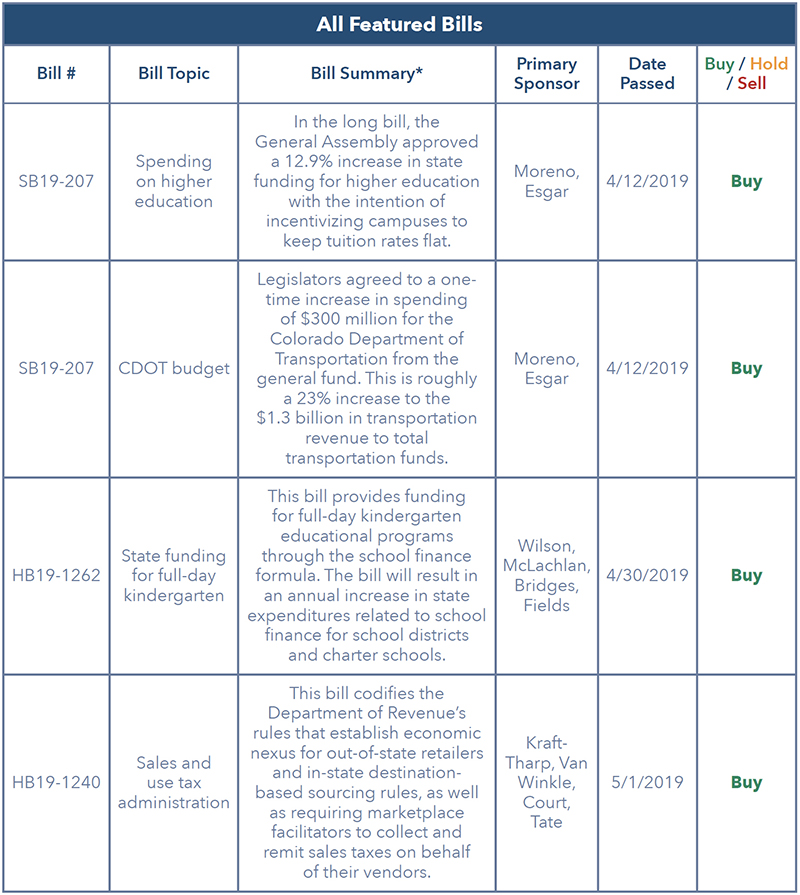 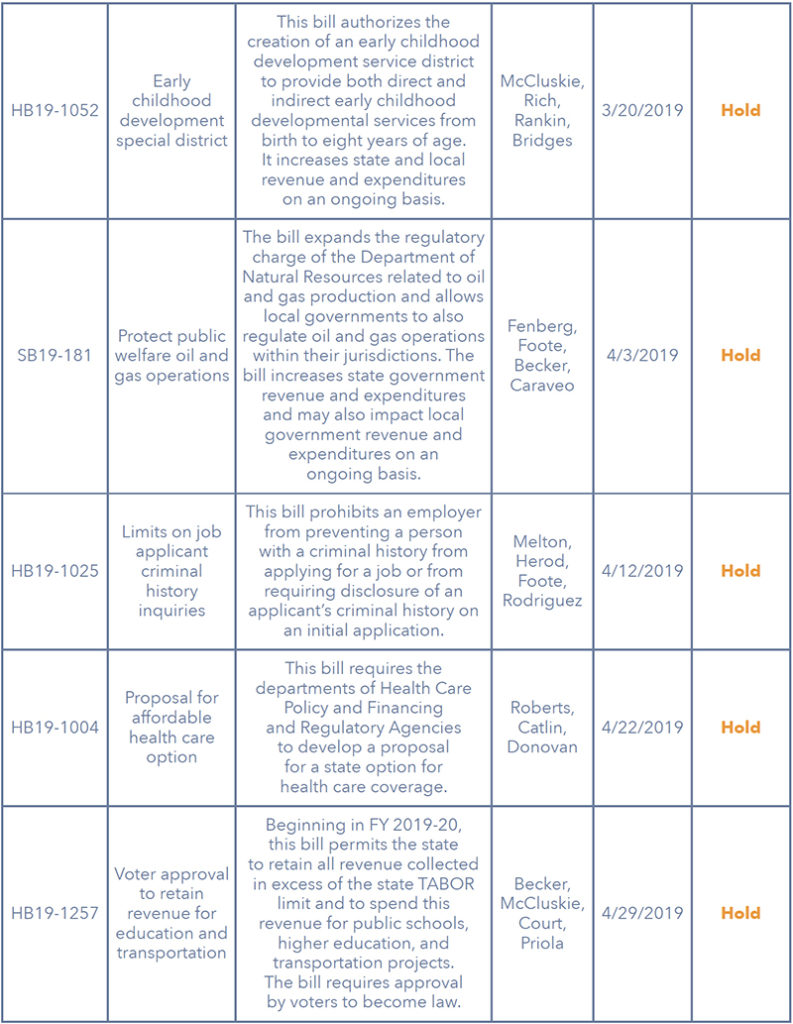 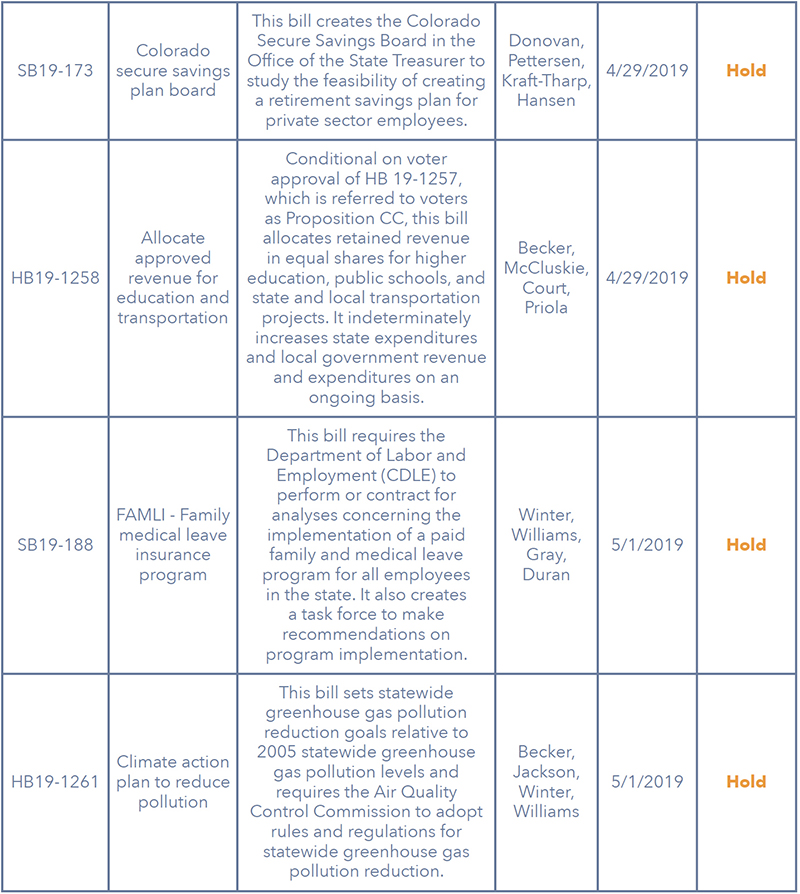 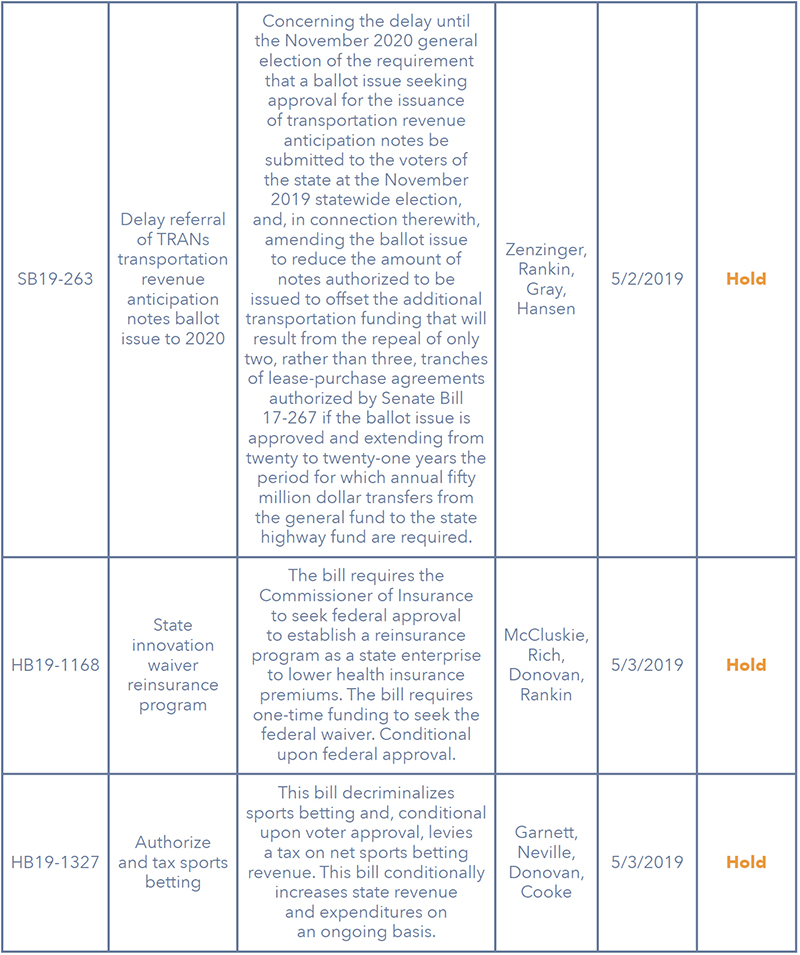 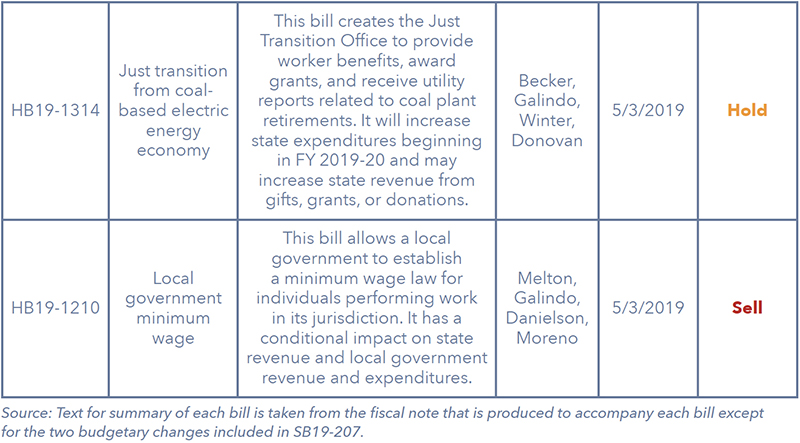 IMPACTS ON THE COST OF DOING BUSINESS

Whether direct in the forms of taxes or fees or indirect through regulatory compliance, the underlying costs of doing business matter for the future of the state’s economy. As businesses look to expand operations or invest for their futures, the long-term costs weigh heavily on where companies choose to grow. The table below includes a selection of bills in first table that will have an impact on the cost of doing business in Colorado. 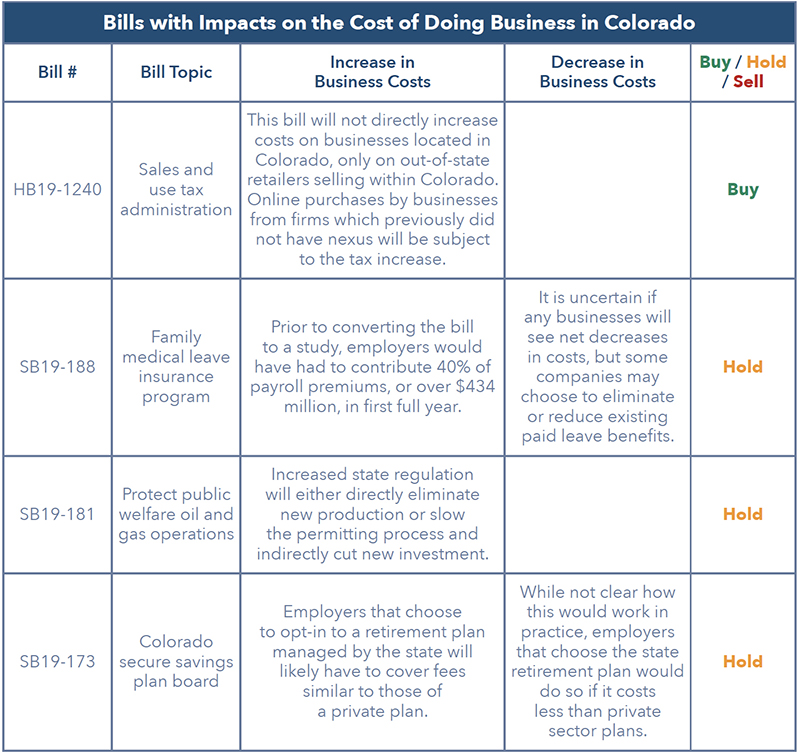 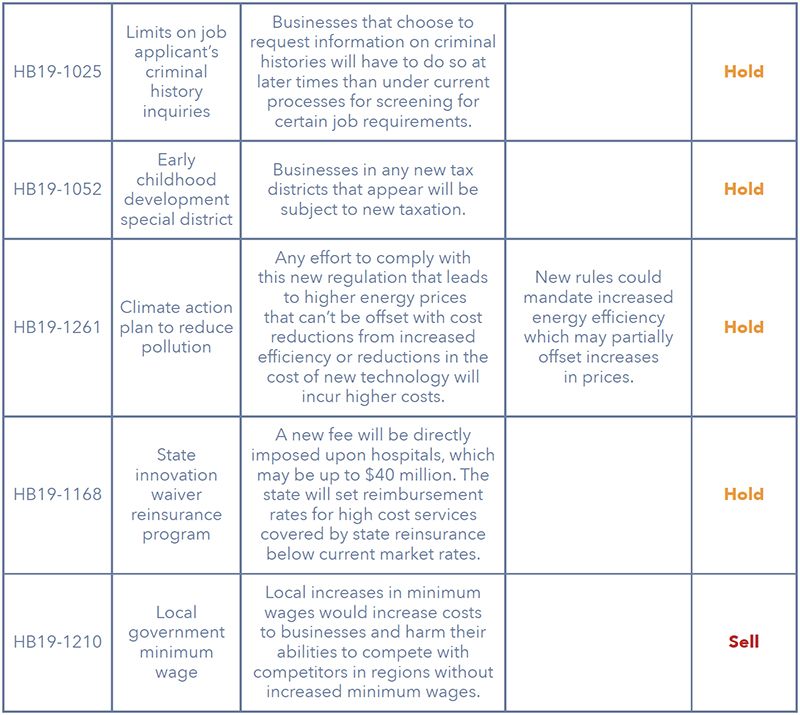 Individual consumers sustain the majority of Colorado’s economy. Shifting costs for households of electricity, transportation, or groceries impact spending decisions because tradeoffs are made within fixed budgets. They also impact where individuals choose to live and their abilities to save to buy houses or take desired vacations. The below table includes a selection of the featured bills in first table that have an impact on costs to consumers. 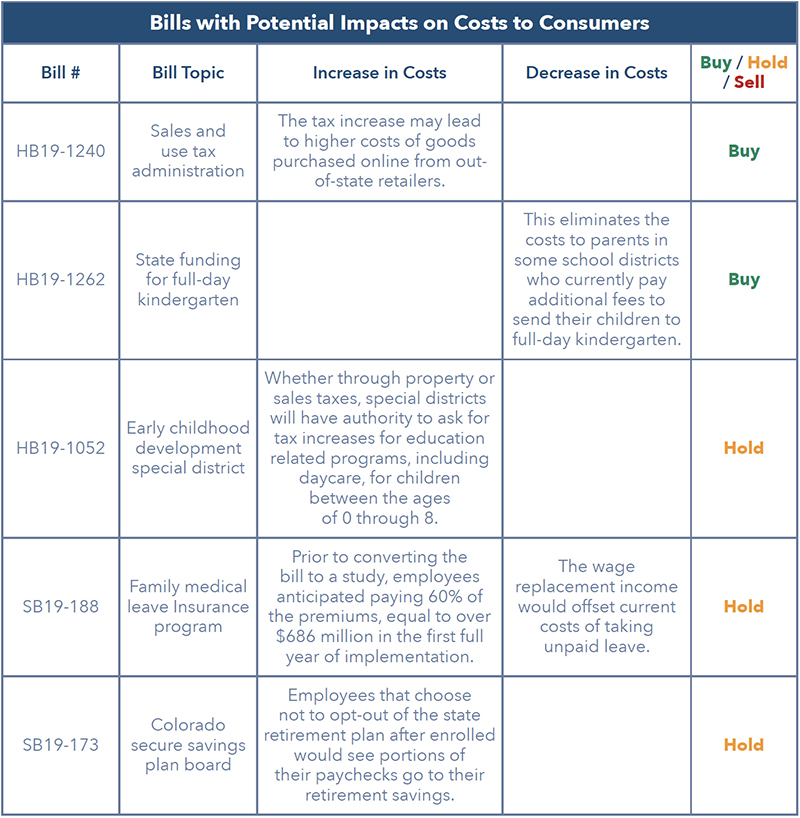 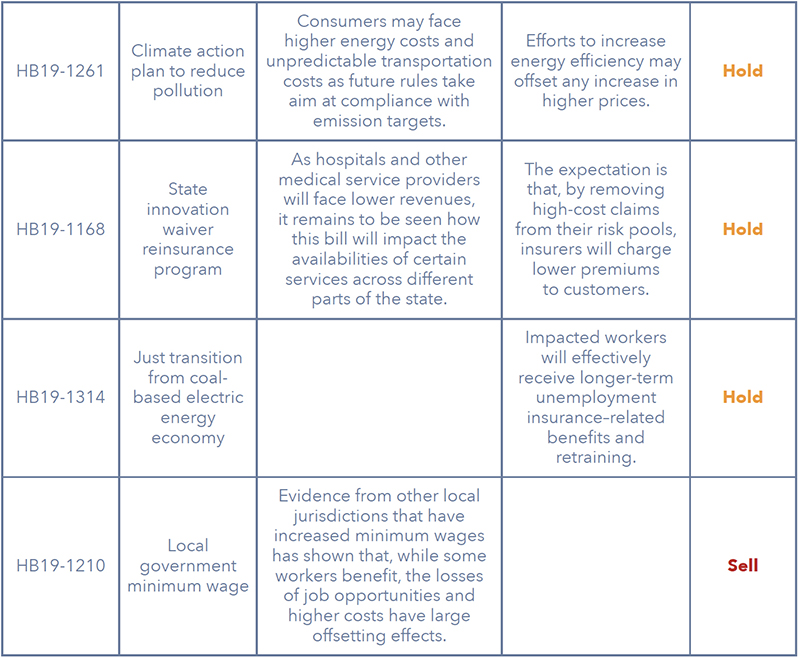 The March 2019 Legislative Fiscal Analyst revenue forecast estimated the general fund will grow 9.5% from 2018-2019 levels (roughly $1.8 billion). This is $69.5 million below the TABOR/ Referendum C cap, and therefore would not trigger a refund. After accounting for increases in mandatory spending and reserve requirements, the legislature was left with over $620 million for new spending priorities. The table below captures some of the major sources of new spending, along with other significant policies that passed that could impact state and local revenues going into the future. 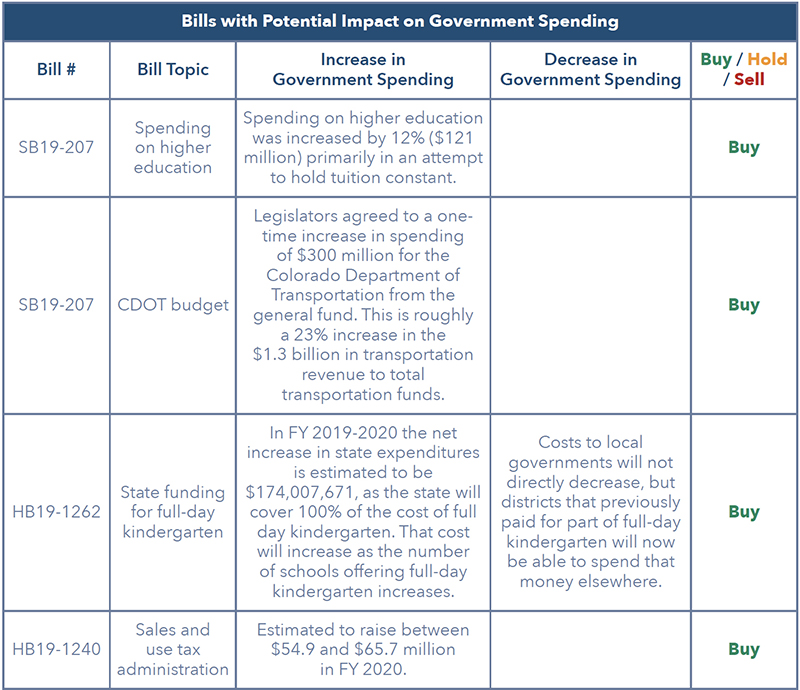 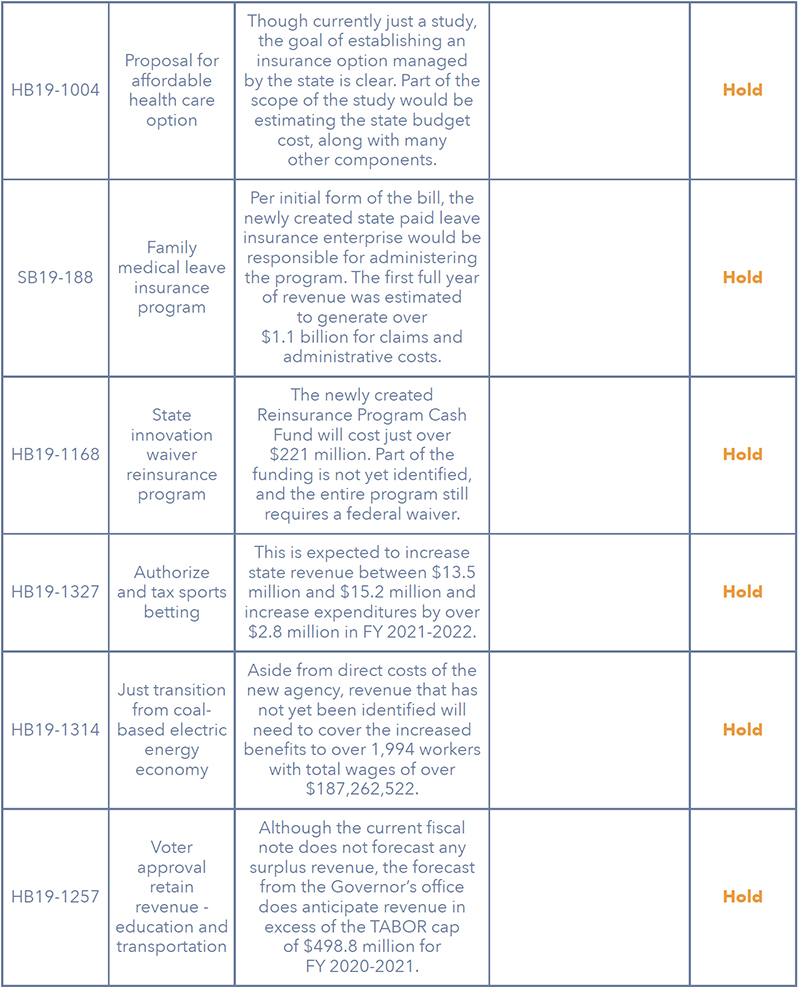 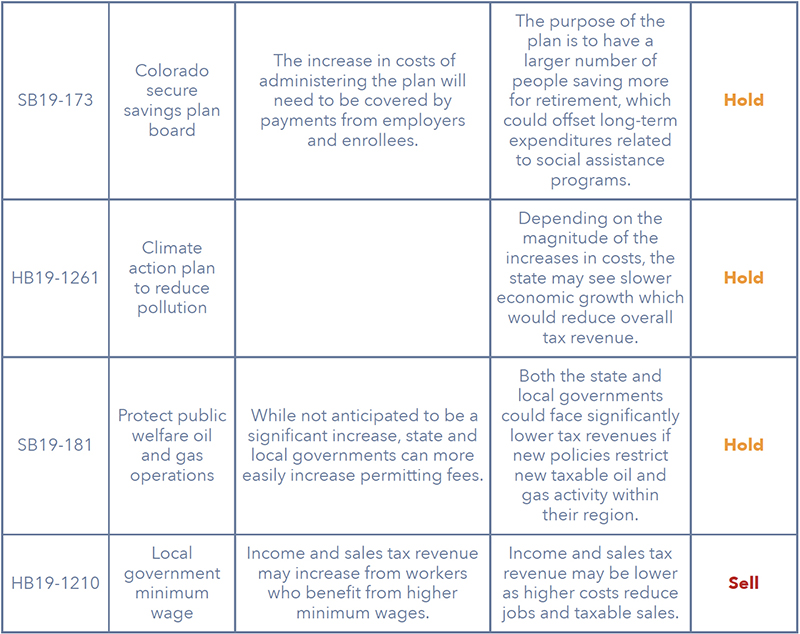 The state of Colorado has several large public institutions that already compete with private companies or offer direct services in the same way private companies do. For some of these institutions, there are compelling reasons why they should operate as public entities rather than be handled by the private sector. This could be due to market failures or that they have been settled as public goods.

The burden of proof for creating new public agencies to perform new services should be high, and CSPR commends the effort to study the issue prior to implementation given the financial and economic impacts. Tracking these issues going forward, the important questions to answer will not just be, “Can the program be financially feasible?” but also should investigate what the failings are in the structure of the existing private market for these services. For example, it should be established whether the private market allows for competition to drive down costs or restricts private companies from increasing access. A discussion should occur concerning foundational need prior to simply establishing that enough tax dollars can be raised to cover new expenses.

Impact of Accumulation of Regulation

Understanding the impact of a single bill is important for a thorough debate. However, recent research conducted by fellows at the Mercatus Institute has drawn attention to the negative economic impacts of accumulations of regulation.5 Nationally, their research has shown that the US economy is $4 trillion smaller than it would be had there been no additional regulations since 1980. That would amount to roughly $13,000 per individual. In 2017, these same Mercatus researchers released summary findings on the impacts of regulations in Colorado. The highest regulated industry was the ambulatory health care service industry, which faced over 12,200 industry-relevant restrictions. That is well over four times as many restrictions as there are facing the telecommunications industry. The potential for significant additional regulations is found in several of the bills that passed, including the authorizing of local minimum wages, the increase of local land-use authority over oil and gas, and the mandating of large reductions in greenhouse gas emissions.

In recent years, the State of Colorado’s economy has consistently been ranked among the best in the nation. Colorado will continue to face the same national and international market challenges that other states face, however new laws recently passed by the Colorado General Assembly could put Colorado at a disadvantage when it comes to competing for new investments. Currently, that disadvantage is due to looming uncertainty. In the long term, that disadvantage could manifest due to implementation of regulations counterproductive to fostering a business-friendly environment.