The federal government has sent over $2.5 billion to Colorado’s K-12 education system since the COVID-19 pandemic hit in March 2020. Approximately $1.6 billion of that funding has gone to school districts through the Title I formula, which is based on the number of low-income students in each district.[i] During this temporary influx of cash, districts are getting at least 10 times the federal funding they normally would receive through the Title I formula. Other earmarked dollars include funds for private schools, students with disabilities, library services and technology and students experiencing homelessness.

Figure 1 displays the total amount of funding that schools have received through the state’s School Finance Act from FY2019-20 through the recently passed budget for FY2021-22. There was a $368 million decrease in school funding from FY20 to FY21 as the pandemic hit the state. In comparison, the federal relief funds totaling $2.5 billion represent nearly 7 times the amount of the COVID-19-related drop in funding. Additionally, legislators made it a priority in the 2021 session to support schools financially by increasing the School Finance Act funding 10.4 percent over the prior year. 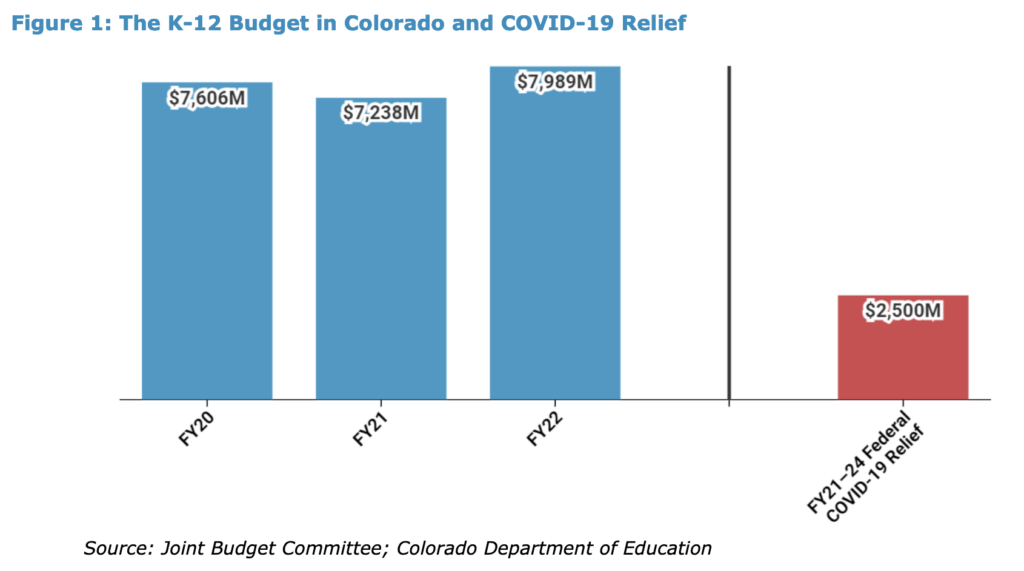 Figure 2 summarizes the federal COVID-19 relief funds flowing to the Colorado K-12 Education system. The figure does not include additional dollars likely to flow to K-12 education through the state’s discretionary pot of American Rescue Plan funding. Governor Polis and the legislature have laid out a plan that proposes spending $26.6 million on education-related services including mental health screenings in schools, high-impact tutoring, school ventilation improvements and educator licensure support.[ii] 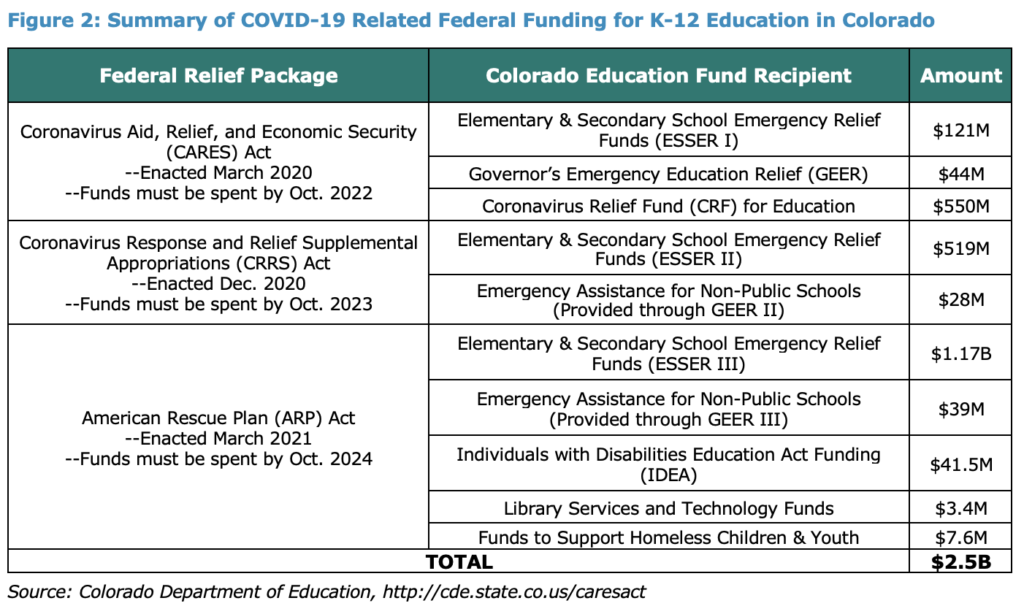 The Elementary & Secondary School Emergency Relief Funds (ESSER funds) included in each stimulus package provide the largest amounts of money that have yet to be allocated. While 90 percent of those funds go to districts, 10 percent is awarded to the Colorado Department of Education. A small number of school districts received little or no funds through the ESSER formula funding due to low numbers of Title 1 students. CDE used some of its 10 percent state share from ESSER I and II to give those districts financial support to address COVID-19 impacts.

From ESSER II, CDE has proposed using $32 million for expanded learning opportunities, but those funds have not been allocated yet, and department staff indicated they may be shifted to other activities.

Combining the remaining ESSER II dollars ($32M) with the ESSER III funding ($117M), approximately $149 million has not yet been allocated from the state reserve.

All ESSER funds must be used, at a minimum, in a way that addresses the impact of COVID-19 on schools. ESSER III includes the most specific criteria for how funds can be spent. For example, CDE must ensure that the following allocation criteria is adhered to when spending the $117 million in state reserve funding:

Within those broad buckets, however, the state agency has discretion over how to allocate the dollars including which schools and programs to support. Additionally, the agency has wide discretion over how to spend the remaining $67 million from ESSER II and III. CDE has stated they will conduct a listening tour in summer 2021 to solicit input on how the funds should be spent. The education commissioner has said that these funds represent a “once in a generation opportunity to support our education system.”[iii]

The agency is looking for creative proposals that can leverage these funds to close opportunity and achievement gaps for students, which have been exacerbated by COVID-19.

When looking at COVID-19 federal relief funding on a per pupil basis, there has been an exponential increase in the amount districts have received through each subsequent relief package (see Figure 5). Across the three ESSER allocations, districts in Colorado received an average of $1,804 per pupil. Governor Polis gave an additional $550 million in federal relief funding to schools through a per pupil formula distribution (through the Coronavirus Relief Fund [CRF]). Combining the ESSER funds and the CRF funds, schools received approximately $2,400 per pupil in formula-based allocations. For context, the legislature recently approved a school finance allocation of $8,991 per pupil for FY2021-22. The federal funds can be used through 2022 to 2024, depending on the stimulus package, so the per pupil funding districts spend may be lower on an annual basis. The $2,400 per pupil ESSER funds would amount to about $600 per pupil if spread out evenly over four years. 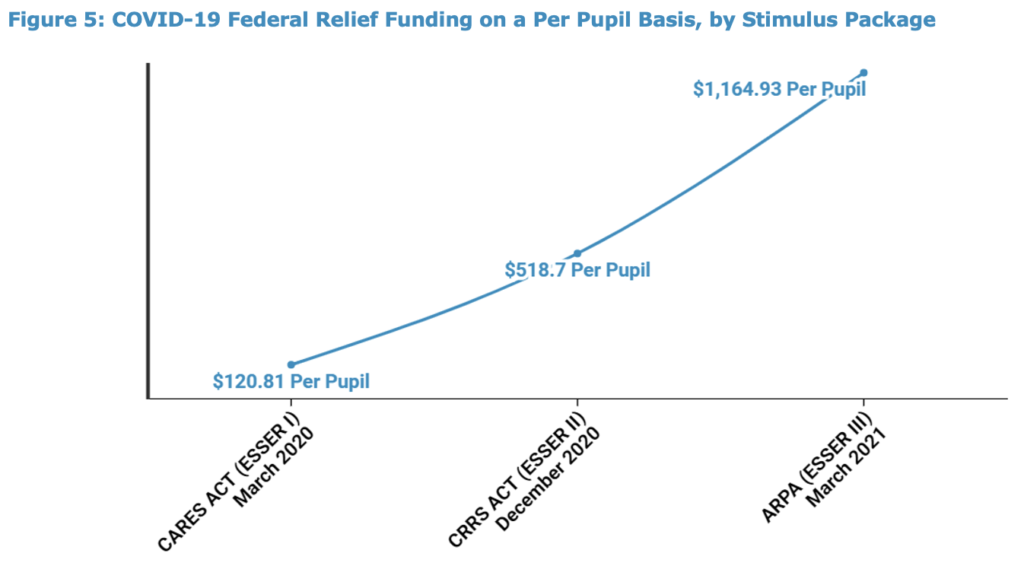 Figure 6 displays the range of COVID-19 federal relief funds, as calculated on a per pupil basis, for school districts in different regions across the state, as well as for the Charter School Institute. Because these funds were primarily distributed using the Title I formula based on the number of low-income students, there is a large range in how much districts received.

As seen in Figure 7, small rural districts in the southern regions of the state received the highest amount of per pupil funding through the formula distributions (ESSER I, II, III and CRF). The figures below do not include any funding that is flowing to districts outside of the Title I formula funding and the CRF dollars. For example, these amounts do not include any of the state share spending that has gone to districts as described in Figure 4. 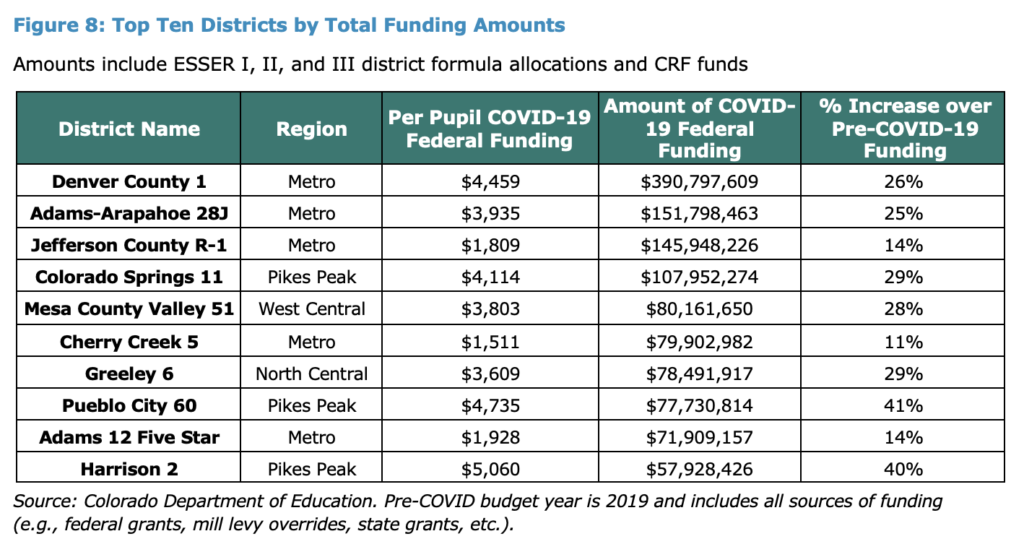 Colorado has seen a massive influx of funding for education. Leaders at CDE and at school districts now face hard choices on how to use the $2.5 billion of new funding in a way that maximizes impact and contributes to sustainable improvements in the system.

Hiring more teachers or increasing salaries will lead to a funding cliff when these stimulus funds run out. Instead, Colorado needs to consider other uses for the funds that address current needs while also shoring up long term success. Common Sense Institute will release a second brief on this topic exploring big ideas for how this one-time money could be leveraged for lasting change.

[i] 90% of Elementary & Secondary School Emergency Relief Funds (ESSER funds) flow through the Title I formula.

[ii] Colorado’s Comeback Map to Building Back Stronger, May 2021. https://drive.google.com/file/d/1CT4LxdRNmzqEQDk_CT_2AUlGGaKkvvTf/view

[iii] Commissioner Katy Anthes addressing the State Board of Education and the Special Board Meeting, May 25, 2021.