Homelessness Issues on the Denver 2021 Ballot: Ordinance 303 and Referred Question 2B

At the start of the pandemic, there were an estimated 6,104 individuals, both sheltered and unsheltered, experiencing homelessness, a 25% increase over three years.[i] Since then, the Metro Denver region’s sheltered population increased by 40%.[ii] According to Common Sense Institute’s (CSI) “The Economic Footprint of Homelessness in Metro Denver”, at least $481.2 million was spent annually as of 2019 on shelters, services, emergency response and healthcare for individuals experiencing homelessness within the Denver Metro region. Of the total estimate, approximately $434 million was spent within the City of Denver.

Neither of the proposed 2021 Denver ballot measures require new revenue streams, yet both direct and demand additional expenditures. 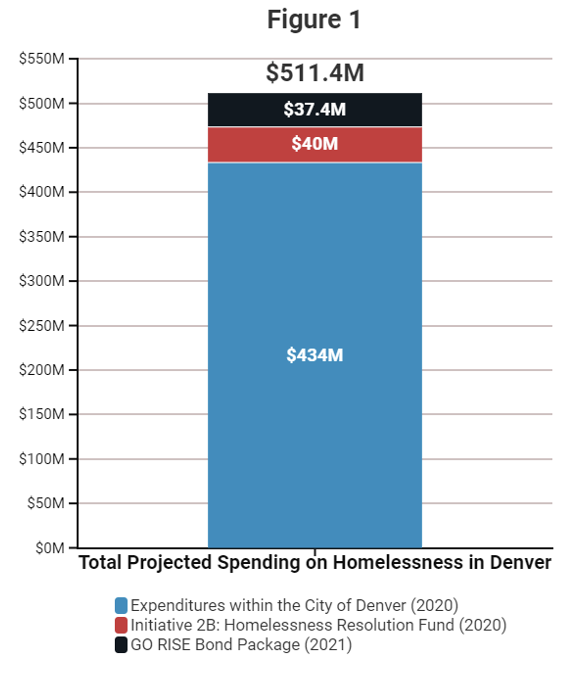 If passed, the recurring expenditures on homelessness in the City of Denver would total more than $511.4 million.

The “Let’s Do Better” Initiative proposes the City and County of Denver continue to enforce unauthorized camping, with the exception of four newly established camping locations on public property. This initiative is not intended to replace other programs serving the unhoused community.

“Let’s Do Better” Interaction with 2020 Initiative 2B

Denver voters passed Initiative 2B: Homelessness Resolution Fund in 2020, which increased the city sales tax by .25% to raise an estimated $40 million annually for homeless related priorities. Initiative 2B funding creates more resources for those who are unhoused through combining housing and services, restoring lost shelter capacity, and improving health and services.

Denver Mayor Michael Hancock’s administration proposed a $450 million General Obligation (GO) bond package that includes 80 distinct projects across the City of Denver. The annual premium to fund the bond is expected to be paid for with revenue from existing property taxes.

Included in this package is $37.4 million to secure and improve facilities that serve people experiencing homelessness.[iv] The City and County of Denver estimates the full economic impacts of GO RISE projects to generate an estimated 7,500 jobs, $483 million in worker wages and benefits, and $1 billion in total economic benefits.