Leading Business Organizations to Lawmakers: “We can, and we must, do better” 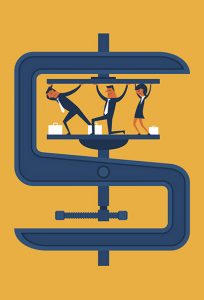 “The failure to rein in benefit costs and ever-increasing taxpayer-funded contributions from school districts, state agencies and local governments will send Colorado down the path of states like Illinois, where public pensions consume one quarter of the state budget,” warned leaders signing the letter.

The findings of a recent study by the REMI Partnership, “One Step Further on PERA Reform: How to build on proposals from Colorado PERA and Governor Hickenlooper to eliminate unfunded liabilities and reduce burdens on state, local and school district budgets,” show just how unbalanced the PERA system has become. Taxpayer-funded contributions into the PERA system from school districts, state agencies and local governments have doubled over the past decade to $1.6 billion a year, according to the report.

“We simply can’t ignore one of the biggest challenges facing our state,” added Earl Wright, Chairman of the Common Sense Policy Roundtable (CSPR) Board of Directors. “Annual pension costs are crushing state, local and school district budgets and crowding out badly needed investments in roads, schools and other essential public services.

PERA in the News…