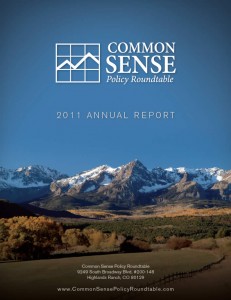 LETTER FROM THE BOARD

Dear CSPR Supporter and Stakeholder,
In just 18 short months, the Common Sense Policy Roundtable (CSPR) has established itself as a dynamic and constructive presence in Colorado’s most important public policy debates. Formed in the summer of 2010, CSPR has placed itself at the forefront of the important discussions about the future of the state’s economy and the system of free enterprise it operates within.

Our eight-member board of directors are a diverse group of business, community, and industry leaders, who share the common goal of ensuring that Colorado is the best state in the nation to do business.  We strongly believe that, by relying solely on the facts and not political rhetoric, Colorado can come up with common sense solutions to the most pressing issues that confront us, even during these challenging economic times.

Over the course of this past year, CSPR asserted itself in many of the leading public policy debates facing Colorado. In May, we released an economic study that examined the potential impact that the statewide tax measure, known as Proposition 103, would have on jobs and Colorado’s economy. The report became a center-piece of the Proposition 103 debate, raising large questions about its impacts on the state’s stumbling economy.

In October, we released a comprehensive analysis of the state’s Medicaid system – an entitlement program that has grown at an aggressive pace, crowding out funding for the state’s schools, colleges and universities, while increasing the pressure on politicians and interest groups to raise taxes. The analysis also surveyed successful reforms that have been implemented in other states.  This study was just one of many that we conducted throughout the year.

In the following pages you will find the highlights of our achievements in 2011.  From composing an issue paper on hydraulic fracturing to analyzing job growth and unemployment in Colorado, we continually educated citizens throughout the year on the most pressing economic issues facing our state. In addition, this fall at our second annual symposium, which was attended by more than a hundred legislative and business leaders, we presented our 2011 studies and discussed the findings from a host of industry roundtables we held with business leaders from across the state.

As we move forward, we see a lot of opportunity to build on this momentum. One goal for 2012 is to continue to pursue the development of an econometric model that will allow legislators and business leaders to get a more dynamic assessment of the impact that a particular public policy will have on jobs and the economy. We will also continue to provide a voice for job creators in the important legislative and political debates in the coming year.

With our partners, and others yet to come, we look forward to an even more productive 2012.

Tax Policy and the Colorado Economy: The Effects on Employment and Migration

Executive Summary And Key Findings:
Colorado State Senator Rollie Heath proposed a 2011 statewide ballot measure, Proposition
103, aimed at raising corporate and personal income taxes from 4.63 percent to 5 percent
and the state sales tax rate from 2.9 percent to 3 percent. The study indicated that if passed,
Senator Heath’s initiative would have a negative impact on future economic growth and lead to
a reduction in employment. Ultimately, Coloradans rejected Proposition 103 in November 2011.

IMPACT PROPOSITION 103 WOULD HAVE HAD ON COLORADO EMPLOYMENT 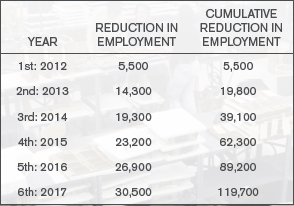 The Medicaid Crisis and the Urgent Need for Reform

Achieving a truly meaningful reform of Medicaid will require innovative thinking and be dependent upon a good faith effort from both political parties to work together. The reforms sought should aim to ensure Medicaid is available for those who need it most and achieved through a system that curbs waste, abuse and excess.

CSPR 2011 Annual Symposium
Over 100 business, industry and elected leaders attended the second annual symposium where the Medicaid study was released; key findings of the economic impact study on proposition 103 were discussed; and a plan to create a dynamic model that will more accurately weigh the impact of public policies on Colorado’s economy was outlined.

Industry Roundtables
Being aware of specific public policies that are inhibiting economic growth and discovering best practices being applied in other states is critical to strengthening Colorado’s future economic wellbeing. In 2011, industry roundtables were held to determine how CSPR could team with business leaders to help educate elected leaders on the potential impacts that policies may have on job creators in various sectors of our economy. the 2011 industry roundtables included:

Dialogue with Governor Hickenlooper and State Legislators
CSPR actively monitors legislation that could potentially impact jobs and economic growth. This past year when proposals were being discussed CSPR would weigh in by sending letters and meeting with our elected leaders clearly detailing our concerns or support for various legislative proposals.

The Pueblo Chieftan
A job-killing stab at funding education
By: Earl Wright, Buz Koelbel, Terry Stevinson
Common Sense Policy Roundtable
Sunday, June 12, 2011
“The study indicated that Senator Heath’s tax increases would in fact have a damaging impact on employment in Colorado and slow the state’s recovery from the recent recession. According to the study, Senator Heath’s measures would reduce employment by 5,500 in the first full year. The reduction in growth rates over time indicate that if the initiative passed it would reduce employment by 30,500 by 2017…”

The Denver Post
An opportunity for an open, thoughtful budget process
By Earl Wright and Buz Koelbel
Common Sense Policy Roundtable
February 5, 2011
“We call on both parties to work together in a forthright and constructive manner to address the morass that is Colorado’s budget. An honest beginning will be to set realistic state revenue estimates, and not to project unrealistic and optimistic revenue estimates.”

Colorado Peak Politics
November 8th, 2011
“The next big blow to Prop 103 came in the form of a study commissioned by the freemarket Common Sense Policy Roundtable (CSPR), which showed that if Rollie’s proposed $3 Billion tax hike passed it could kill up to 119,700 jobs. This study, more than anything, defined the terms of the debate early on, with supporters unable to come up with a competing “study” claiming no job loss until the week before the election.”