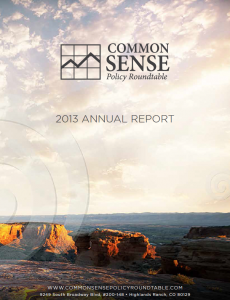 When we were formed in 2010, we pledged to have a constructive and engaging presence in Colorado’s most important public policy debates. Our mission has been to cultivate jobs and the economy in Colorado and do this with intellectual integrity.

Last year, we promised to construct a dynamic econometric model unique to the state of Colorado. I’m pleased to say that was accomplished.

At the beginning of the year, we introduced a symposium of legislators to the dynamic model concept. Experts from Regional Economic Models, Inc. (REMI), explained the differences between current state legislative static model analysis and dynamic econometric modeling. The conclusion was that the current model analysis risked poor economic decisions and that a change to a dynamic economic model had to be made. We began thorough due diligence to verify REMI’s competence.

A unique feature of this consortium was the development of a partnership with University of Colorado’s Business Research Division of the Leeds School of Business. The consortium meets bi-monthly to establish research priorities. Our first research project was to determine the economic impact of Amendment 66, a proposed tax increase for public education funding.

Conducting an economic study on the impact of a roughly $1 Billion annual tax increase was equivalent to stepping into a firestorm. We chose to be constructive as well as forthright about the economic impact of the ballot proposal. Beyond measuring the economic impacts of the tax increase, our study assessed the educational results needed to justify the tax increase. Our studies concluded that Amendment 66 would have a negative impact on Colorado’s long-term private sector job and economic growth if specific educational outcomes were not achieved. Further information on our Amendment 66 studies is featured later in this report and on our website.

Another important issue in the November election was Douglas County School choice. We were tasked to find an objective third-party with expertise in the area of School Choice to assess the situation. We identified and engaged the Honorable Peter C. Groff who authored the study “Douglas County School District: The Impact of a World-Class Education.” The former State Senate President, Groff served in the Obama Administration’s Education Department and is a nationally recognized expert on this topic. His report and various interviews with the press including live radio as well as TV, contributed to a more factual analysis on the School Choice issue, which had previously been dominated by emotional verbosity.

In 2013, we also began investigating two other significant statewide issues. First, what are the facts and possible solutions behind the PERA issue? From initial research, a resolution appears to be possible. Our second REMI dynamic research study will focus on the energy industr y. What is the energy industry’s economic contribution and its potential for responsible energy development? Both issues could have a significant impact on Colorado’s future.

Beyond last year’s initiatives, in 2014, we are committed to a study of the “Coming Colorado Financial Crisis and Alternatives to Avoiding It”. The aging of Colorado’s population along with new added Medicaid coverage is forcing Colorado into a significant budgetary deficit, forecasted to hit between 2018 and 2020. We strive to answer the questions of how big is the state deficit likely to be and what alternatives are available to close this fiscal gap, while minimizing the impact on jobs and economic growth. To avoid the potential fiscal crisis, Colorado must be proactive AND know the best possible choices.

In 2014, we will continue sponsoring community forums for bipartisan political debate, exchanging of ideas and studying results. CSPR has much to accomplish this coming year.

We are privileged to live in this wonderful state. We owe it to ourselves, our community, and our future generations to make rational and thoughtful decisions.

To our partners and stakeholders, we thank you for your support. For those who find our efforts and research of interest, join us.