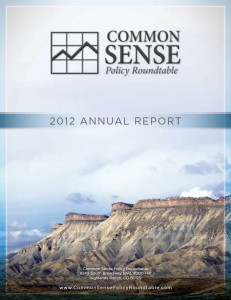 LETTER FROM THE BOARD

Dear CSPR Supporters,
2012 was a year of continual success and challenges for Common Sense Policy Roundtable.

Considerable progress has been made in introducing a dynamic econometric model for Colorado. We have met with legislators, executive branch personnel, academics, and university leaders. All have opinions, which are favorable for the need of a dynamic model and recognize the values of assessing economic and job growth when major policy decisions for the state are being considered.

We entered the final phase of setting up a “public-private” organizational structure allowing legislative, commercial, and academic use of the dynamic model balancing economic and job creation research. The challenge will be prioritizing our research. The end reward will be the enhancement of public discourse and decision-making on key public policy decisions.

Additionally, in 2012, we accepted another challenge. CSPR was asked to research what other states may be doing to control the growth of Medicaid budgets. Governor Hickenlooper has accepted the federal government’s offer to finance expansion of state’s Medicaid recipients and programs. Eventually, the state will need to replace the federal government’s subsidy starting in the fourth and fifth year. Then Colorado will face a ‘fiscal crisis’. This year we produced a report on the alternatives other states have chosen to control state Medicaid expenses. It discussed how other states have had success in meeting the unique Medicaid demands without spending more.

Beyond the special Medicaid study, we continued focusing on jobs creation. Through the use of dynamic modeling, CSPR explained that certain jobs create more of an economic multiplier effect for Colorado. For example, CSPR helped legislators and various community organizers understand how one energy job could create approximately 5 additional jobs within Colorado, whereas the “typical” Colorado job may create 2 to 3 additional jobs. This information helped contribute to the encouragement of statewide energy policy for fracing with state regulators and executive branch clearly understanding the greater opportunity for job growth within the energy industry.

Lastly, closing out the year, we assisted with several broader community efforts. We supported the Yes on S personnel reform initiative. In effect, the executive branch would have broader authority in personnel changes. In addition, we co-hosted the first annual Business Legislative Candidate Forum, featuring Senate District 26 and House District 3. We hosted this in partnership with the Denver Business Journal, Denver South Economic Development Partnership, and South Metro Denver Chamber.

As you can see, 2012 has been a year of significant progress working across party lines and coming up with common sense solutions to business policy issues. We fully expect that in 2013 CSPR will institutionalize the dynamic model as a publicprivate good. Our first priority will be to clearly explain the “fiscal cliff” Colorado has coming in the next 5-6 years related to Medicaid. First, it is a matter of informing, second, it’s a matter of assessing, and third, it’s a matter of identifying resolution. Hopefully, the public debate will start this year.

Thank you for all your contributions and support to the Common Sense Policy Roundtable.